It was a sunny, beautiful Saturday morning, the birds were chirping and the sound of volunteer feet echoed on the concrete. 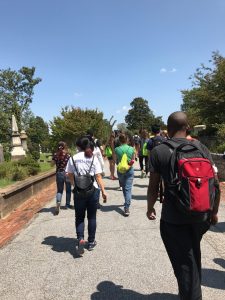 After heading down to the Ducling for breakfast with a few of my friends, we were on our way to the WoodPec where all the volunteers were scheduled to meet.  As we set foot in the WoodPec, the chatter of hundreds of volunteers trying to fulfill their PACE requirements filled the place.

We followed this chatter all the way to the “front desk” where we checked in and were given name tags and told to get to know some of the other people going on the trip with us.

After aimlessly walking around the wide court, not even glancing at strangers so as to avoid any early morning conversations, we were all transported to and then distributed amongst 4 blue Emory shuttles.

It was just a 30-minute bus ride to Oakland Cemetery yet it was one of the worst bus rides of my life, as one of my peers was talking at a brain drilling volume, non-stop for all 1800 seconds. 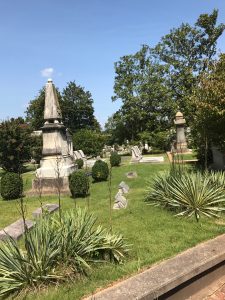 After we arrived at our destination we were met by a few tour guides who led us to the groundskeeper of the cemetery, they then gave us a speech speaking to the importance of what we were doing and how they genuinely wouldn’t be able to keep the cemetery in as good of a shape as it was, if it wasn’t for all the volunteers.

Soon after, we were distributed in small groups of 12 and given different tasks.

After getting to know a few people within my 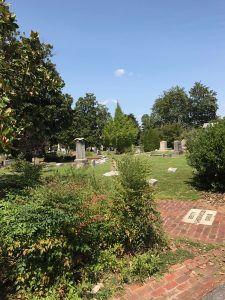 group, I decided that I would be of most help to the cemetery by shoveling the mulch into wheelbarrows, that would then be spread out on different sites at the cemetery to work towards the end goal: enriching the soil that was starting to decay.  4 hours after shoveling the mulch under the excruciating heat, we had finally gone through over 3/4s of the huge pile that was there when we first arrived.

Overall, even though the work was excruciatingly difficult, and gave me back pain, I really enjoyed volunteering with Volunteer Emory, especially since I ended up getting to know a lot of people. Afterwards, I felt happy knowing that my time and volunteer work went to great lengths helping urban projects in Atlanta. Having had such a great experience, I can’t wait for the next opportunity to volunteer. 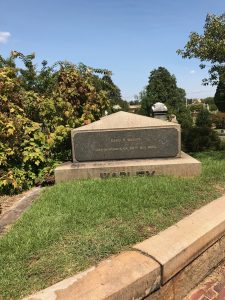