Close your eyes and think back to home.Is home in Georgia? Is it far away from Georgia? Is it on the West Coast or East Coast? Is it in the MidWest? Is it out of the country? Now imagine a law has passed stating that you can never live anywhere outside of your home state. How would that affect your enrollment at Emory? In what ways would you be limited? As horrible as this sounds, this scenario was reality for many Jews between the years 1791 to 1917, during which the Pale of Settlement was established.

The Pale of Settlement was an area apart of Russian territory that allowed Jews permanent residency, but forbade them from taking up residency anywhere else, which crushed the dreams of many young people who wanted to pursue a higher education outside the borders of the Pale of Settlement. However a loophole was found with the issuing of yellow tickets: a nickname for the identification cards that were given to Russian prostitutes that allowed them to live outside the borders. Many Jewish women took on the titles of prostitutes in order to expand their rights and live or go to school wherever they wanted, and The Yellow Ticket is a 1918 film that depicts such a scenario.

When one of our group members, Rachel, first rushed in, trying to find where the movie was located with only two minutes left before it started, a girl walking behind her stated that one of her friends told her the movie was filled with prostitution, which immediately had Rachel questioning Emory University’s taste in film. But we were pleased to find The Yellow Ticket was an engaging film about the struggles of a young woman who loses everything and must take on a double life as a prostitute and university student in order to have a chance at a better life. 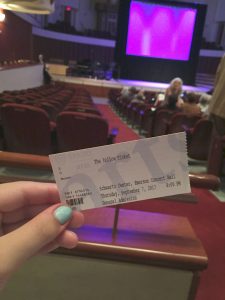 The lights went dim, and the three performers were introduced: composer Alicia Svigals, pianist Marilyn Lerner, and clarinetist Laura DeLuca. It was easy to tell who was the star of the show: Alicia’s long red dress immediately captured the spotlight. 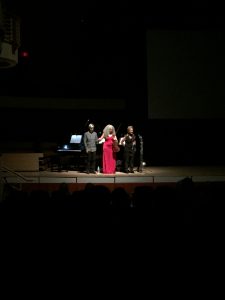 Svigals, the world’s leading klezmer fiddler, founded the Grammy-winning Klezmatics and has collaborated with many renowned musical artists. She has also made appearances on shows such as David Letterman, MTV, and more. She is the recipient of the Foundation for Jewish Culture’s 2013 New Jewish Music Network Commission for her score of the Yellow Ticket.

Lerner’s musical style is seasoned with multiple different cultures, performing internationally from Montreal to Havana to Jerusalem. She is a recording artist, and has also toured with other groups of performers.

DeLuca started playing in the Seattle symphony in 1986 and is one of the founders of Seattle Chamber Players. Aside from performing in concert halls all around the world, she has been featured in more than one hundred recordings and has collaborated with distinguished composers and performers.

Beautiful music filled the concert hall the very second the film began, and the tone perfectly matched the mood of each scene. Alicia’s singing voice perfectly complimented the strings she played, matching with her partners beside her. We watched as the music got louder and darker during the dramatic scenes and soft during the comedic ones. The audience, consisting mostly of older adults and a few college students here and there, was captivated by the abilities of the performers and the emotions they evoked from the film. 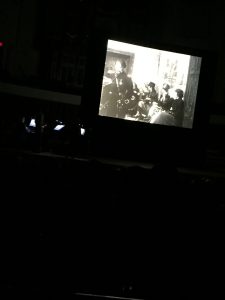 One student in our group, Michael, was able to meet Alicia Svigals as she came to speak to his Music in Film class. Svigals stressed the effort and thought she put into every second of the film as she essentially lived in her studio for two whole months. With The Yellow Ticket being a silent film, Svigals said that she wanted to “make the narrative more clear and bring out the emotion” of the film. Though looking back at it, Svigals said that scoring the film from second to second was a “rookie move”, she is constantly fascinated with how such precision in the score makes each performance slightly different and unique. She explained that playing in complete unison with the score and film was essentially impossible with the amount of detail she put into every scene. Though at first this seemed like a detriment to her work, Svigals came to realize that each performance acted as a snowflake, patterned differently and completely unique from the others.

Svigals also stressed how the film is filled with unknowns. From the very beginning, the director gives little background information or hints about the setting or main character, Sofia. Instead of trying to make sense of these unknowns, Svigals took advantage of this and layered the score with music from multiple cultures. This melting pot of different sounds emphasized this unknown as Sofia takes us on her journey to St. Petersburg. When viewing the film with Svigals’ score, one might notice that some melodies repeat themselves throughout the movie. Svigals created these specific melodies to represent different emotions and gestures. As Sofia makes the final decision to become a prostitute Svigals plays a melody of shame with a diminished harmony and a strong sense of darkness. This melody appears every time Sofia is seen working her night job in her alternate life. Along with shame, Svigals composed a waltz melody to symbolize romance as Sofia’s classmate quickly fall in love with her. The melody is layered with the three instruments and composed perfectly to bring out the growing feeling of love that falls within Sofia’s story.

Following the performance was a twenty minute Q&A with the artists. Audience members asked about the creation of the score, how they keep up with timing and precision, and the personal lives of the artists in general. 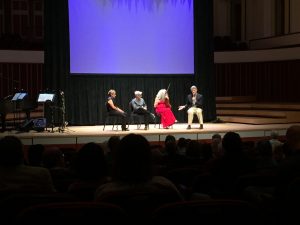 This performance of The Yellow Ticket was a very interesting and unique experience. We enjoyed observing the passion and excitement of the performers which was shared by the audience. The show brought to our attention the effects that music has on the emotions that a film portrays. We left the concert hall impressed, enlightened, and inspired.