Disclaimer: Not many pictures because the BlackStar Magazine livestreamed and took photographs of the event, and asked that past a certain times, no pictures be taken. 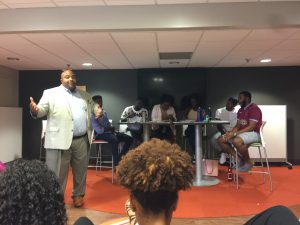 In 2009, Chimamanda Ngozi Adichie gave a TED talk called “The Danger of a Single Story.” It was about what happens when different human beings are reduced to a single narrative or experience. For example, when Africans  are treated as pitiable poor, starving victims with flies swarming their bodies. More fitting for this article, when black people are all expected to share beliefs, culture, and history regardless of where they come from and what their backgrounds actually are.

On Tuesday, September 26th, black people of all different shades and backgrounds poured into the Emory Black Student Union (EBSU). The occasion? An event called “The Linkup.” Representatives from the Black Student Alliance (BSA), Emory NAACP,  and the African and Caribbean Student Associations came together to begin a series of tough talks in the black community at Emory. The moderator, pictured standing, focused on the power of being an advocate for social change. He emphasized the importance of learning effective communication and being willing to listen to conflicting point of views with the intent to learn, and not sway.

The topic for this debate was in question form, “Do black students find the black community to be alienating despite a large focus on inclusivity?” The debate was separated into a “yes” and “no” side of the argument. It included opening arguments, rebuttal, cross examination, and a closing argument. The “yes” side focused on how many cultural communities are judgmental with the typical “you’re not black enough” narrative. They also mentioned the importance of creating community and safe spaces for people to express and deal with their experiences and their emotions. The “no” side focused on points such as a large increase in participation in events put on by black organizations and the fact that many black communities on campus pride themselves on their stance that blackness is all encompassing and not a singular experience.

In the end, there seemed to a general consensus that there doesn’t always need to be a general consensus. Blackness is not a single story. All black people don’t look alike, all black people don’t eat the same food, we don’t share the same family unit, our hair doesn’t hold the same curl as each other, and our identities as a black person and also as an individual are not exclusive. We do not share a single story, and we embrace that.