This past week was crazy for me. Being that it was Homecoming Week and I’m in Student Programming Council, the student organization that runs Homecoming, I was so relieved that I got Saturday off because my family was coming for Parents Weekend. I thought that this would be a perfect time to go out on the town and give my family a taste of Atlanta by going to the historic site of The King Center. 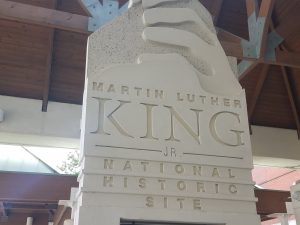 The King Center was established in 1968 by Coretta Scott King to continue Dr. King’s Dream and preserve his legacy. This living monument educates patrons about non-violence and civil rights in an effort to inspire future generations to carry out Dr. King’s legacy. The King Center does more than memorializing Dr. and Mrs. King. It also features many other important champions of civil rights, past and present. The first place I stopped on my self-guided tour of The King

Center was the Civil Rights Walk of Fame. The Civil Rights Walk of Fame was established to honor people with significant contributions to equality. Some of those featured include Rosa Parks, Magic Johnson, Rev. Al Sharpton, Bill Clinton, NeYo, and Dr. Maya Angelou just to name a few. The Walk of Fame is updated each year with new inductees. The Walk of Fame ended with a statue of Mahatma Gandhi, who inspired Dr. King’s non-violent philosophy. It’s hard to explain, but the whole area exuded an air of enlightenment and reflection. All around there were plaques with passages and quotes from Dr. King with one-word titles like “Mandate” and “Motivation.” Thos definitely added to the aforementioned feel.

After passing the World Peace Rose Garden, I went to the Historic Ebenezer

Baptist Church. Ebenezer Baptist Church is the pastoral home of Dr. Martin Luther King Jr. and Sr. The church was restored in 2011 to its 1960s state. Being in the church was really nostalgic. Going to church was a big part of my life when I was younger.  My family is pretty religious, so being in the traditional style church made me feel like I’ve been there before. Whether it’s was the beautiful kaleidoscopic stained-glass windows, the wooden pews, or the red carpet, I was just so fascinated by the place. Even my dad felt that there was just something about being in there that interested him and it was his favorite spot of the tour.

After leaving the sanctuary, I went downstairs into the fellowship room. It was a small room with tile floors. There

were rows of chairs that people could sit and watch a video about the church.  Different fact boards line the walls and there were two glass cases with artifacts such as photographs, Bibles, and shards of glass from the original Ebenezer Baptist Church.

The final part of the tour ended at Freedom Hall. I didn’t have much time to explore because I had to go to work, but this area didn’t have too much to explore because of construction. In preparation of the 50th anniversary of Dr.  King’s assassination and the establishment of The King Center, there are renovations going on in Freedom Hall, the Crypt, and Reflecting Pool. Even with the renovation, I still enjoyed my experience. Going to the King Center made me really reflect and think about

how much of an impact Dr. King and the Civil Rights Movement had on my life. Without going through the obvious historic and political route, references to civil rights are all around me.  I was always very involved with Black History Month in school and for a while, I’ve been that person to always talk about black issues and address civil rights in general. Weirdly, Dr. King has had an impact on my poetry because of his performativity when giving speeches. Going back to the Civil Rights Walk of Fame, one of the people I didn’t mention was Roberto Goizueta, who’s the namesake of the b-school. I’m also a Jackie Robinson Foundation scholar and my sponsor is Hank and Billye Aaron, Hank Aaron is also featured on the Walk of Fame. My dorm is decorated with MLK and Malcolm X posters and other nods to black culture.  And overall I want to work in a career dealing with civil rights, education inequality, etc. I’m not saying this to say to have some theory of fate. I think the bigger picture is that a lot of times we don’t notice how the things around us shape our futures. Being that we’re college students, it’s nice to just think about how different experiences guide our decisions. It’s great to do this now because soon we’ll be able to declare our majors and a little later down the road, we’re going to be choosing career paths. These are very big decisions, but I think that reflection is a good way of preparing for a big decision. 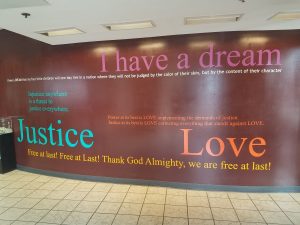 The King Center is open seven days a week from 9am-5pm. If you want to learn more or plan a visit, you can check out their website by clicking on this link