The country of Ireland has two official languages: Irish (or Gaelic) and English. Jennifer Leeman and Gabriella Modan’s article on the linguistic landscape claims that “material manifestations of language are implicated in the micro-level social, political, and economic process,” contributing to the physical make up of a city or area. In examining the commercial, official, and social aspects of written and spoken language in Dublin, a strong adherence to the spirit of fostering a national culture and community emerges. Through language, the city refuses to forget its history. The use of varying degrees of formality from government signage to casual or conversation language further reinforces the Irish stubbornness rooted in their national identity.

While walking the streets of Dublin, both in the city’s center and its outskirts, road signage is, of course, integral to the experience. Almost if not all official signs, presumably coming from the government, are in both Irish and English. To give a bit of back story, Ireland only recently reintroduced Gaelic in an official capacity. Under British rule, the use of Irish was made illegal in an attempt to quell the raging rebellion and lessen Ireland’s sense of a national identity. Now, the native language serves that exact purpose. The government has signs in both languages to reinforce this and ensure that the nation never forgets its history, before, during and after English occupation. The signs serve as an everyday reminder. English is equally present in Irish history and culture, and it is even more necessary and relevant for day-to-day living. While many Irish learn the historic language in school, it is rarely spoken in conversation, especially in Dublin. More so, any person visiting Ireland would need help navigating if all the signs were in Irish. Thus, it follows that road signs should also be in English. Below is an image on a street sign displaying the Gaelic name of the road with the English translation beneath. 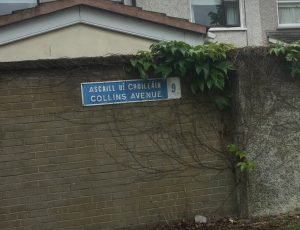 Contrastingly, any signs used in an unofficial capacity or for commercial purposes universally use English. This shows the international span of English as well as, perhaps, the limitations of Gaelic. Since so few people use it in an informal capacity it makes little sense to dedicate an entire advertisement to the language. This also allows for increased business opportunity, especially in a city as reliant ontourism as Dublin, making the advertisement more accessible to the larger community which does not speak or read Irish. The following picture speaks to the mix of Irish and English signs in Dublin’s City Center, showing a road sign in English and Gaelic in front of a bus which models an English advertisement on its side and Gaelic writing noting its official position as a city bus towards the bottom. 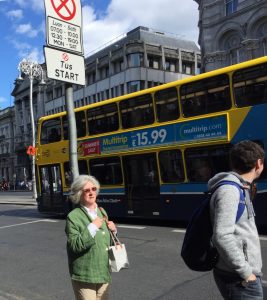 To mention verbal public language a bit, by comparing British/Irish English to American English, one finds differences in the choice of wording to describe a situation. The below image shows a government sign found in a residential neighborhood which asks dog owners to pick up after their dog’s poop or risk a fine. Specifically, the sign says, “Bin the Poo” below Gaelic of the same meaning (presumably). In the US, our signs say things like “clean up after your dog.” The similarities between British and Irish English speaks to their shared history, such that even with thereinvigoration of the Irish language, the two cultures are unavoidably linked. 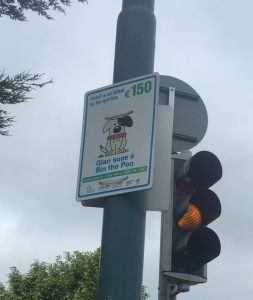 The general Irish person tends to speak very informally, no matter the context. In a business setting, the Irish are as likely to talk about their night out drinking as they would with close friends. This kind of casual language inspires a sense of community where anyone can feel included and encouraged to participate with so few boundaries or taboos.

While Dublin is a very international city—one commonly hears a multitude of languages while traversing the streets, particularly in the more tourist-centric areas—its commitment to promoting the use of the Irish language perpetuates the importance of a national identity, never forgetting its heritage.