Berlin is a major capital of the connected world, not just of Germany itself. In my two and a half weeks in the city so far, I have heard many world languages spoken around in the subway and passing by on the street, including Turkish, French, Spanish, and Russian. German, of course, and English are the two most prevalent languages I have heard, but what surprised me was that amount of English was spoken. I have since learned that in addition to personal desire as a motivating factor for nonnative English speakers to learn English, there is quite a necessity to use the language as a lingua franca, a common language, to communicate with native English speakers and nonnative English non-German speakers as well.
Considering personal desire and business necessity as key factors to keep up in the in-progress age of the connected world, the Berlin population shifts to a mo 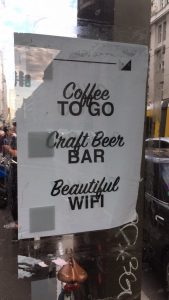 re English-speaking community, with English nearing equality with the amount of German spoken in the city. As such, businesses and certain neighborhoods as a whole post signs that are directed to the international and Millennial-generation communities, because they are aware of how prevalent English is in their community. The linguistic landscape of the city moves to English with the growth of the current generations. A founder of the startup I work with, Georg Wesowolski, in conversation about what he thought about Berlin as a city, noted “all the hipsters are speaking English now, it’s the thing to do.” I was intrigued by his comment that he thought learning a language was considered a “hipster thing,” keeping it in mind when I visited Mitte, a borough in the city with a large young urban professional crowd. In Mitte, this sign (left) caught my eye advertising for “coffee to go,” a “craft beer bar,” and importantly, “beautiful wifi.” A couple aspects of this sign reveal the linguistic landscape of Mitte and of Berlin. First, that the top item specifies that the coffee, written in beautiful italic font, is to-go, a fad that is only recently catching on with increasingly busy Millennials in Berlin as Europeans tend to appreciate their coffee sitting down and taking their time. Second, a craft beer bar, a movement that spawned in the United States nurtured by Germany and is clearly intended to catch the eyes of American businesspeople and German Millenials. And finally, the beautiful WiFi! I, a proud member of the late-Millenial generation, covet wireless fidelity and would order a double shot of wifi in my almond-milk latte if only it were served. This sign was meant for me! Leeman and Modan, in the Contextualized Approach to Linguistic Landscape reading make a point however to “distinguish between locally-produced signs and those that just happen to be found on the premises” as the conflation of locally produced signs and signs that just happen to be on the premise written in English words when observing the linguistic landscape would be “the failure to limits our understanding of what different elements of the LL communicate.” (336). This sign however, is an example of the hipster millennial culture indicated to me by Wesowolski because of the presence of other American and French cafes not pictured in the neighborhood.

Following Wesowolski’s comment, I inferred from our conversation that he perceives German to be used as the colloquial, conversational, language between usually native German interlocutors while English is used as a language of business or as a bridge between the many different cultures 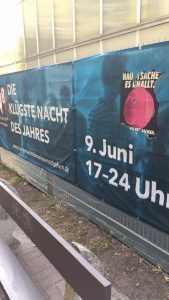 found in the compact continent of Europe. One of the events I went to with Wesowolski was the Berlin Lange Naucht Des Wissenschaften, or Long Night of Sciences, which was essentially a city wide science fair. At the Beuth University of Applied Sciences location of the event, I heard the most German spoken than I had the entire time I had been in the city cumulatively. It was thus clear to me that despite a largely academic, English-speaking crowd thatwas there, there was an emphasis on the attendance of families and German speakers at this event. Most of the presenters at the event defaulted to German unless I had asked for them to explain their project in English or for visitors to our booth to explain the pitch in English.

There is a clear bilingual culture here in Berlin with many residents, most of whom speak German fluently and have a basic understanding of English. And many of those already bilingual may come in with another language like Polish or Turkish.

2 Replies to “My Berlin Linguistic Landscape”