As an international business hub and home to a multitude of tourist attractions, it is understandable that Hong Kong is a city whose inhabitants form a multilingual community. While Cantonese is the official dialect utilized throughout the city, English is also used regularly as a communication tool for business and legal matters. Although people from mainland China and Hong Kong both speak the same language, the difference in dialects can still cause difficulties to arise. In Hong Kong, all the signs have traditional Chinese characters, which is very different from the simplified writing system that many mainlander Chinese use. It was interesting to see how people of the same ethnicity have a rather divergent linguistic landscape. I noticed that a great majority of signs included both the Chinese traditional characters along with an English translation or counterpart. The Mass Transit Railway (MTR) is the main source of transportation, and there are English names underneath all the stops. This is most likely intended to aid tourists in moving around the city independently, which shows the level of integration that the English language has acquired since the British rule in Hong Kong. MTR is almost a necessary means of travel in Hong Kong, and having English on every single sign in and around the station is a prime illustration of the prominence of international presence in the city. 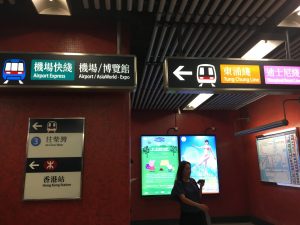 Central is one of the most well-known bustling areas of Hong Kong and is often compared to New York City due to its busy and fast-moving nature. The shopping malls and financial centers attract both locals and foreigners with its distinctly urban vibes, and therefore it is a popular place for many cultures to intermingle. I noticed that in areas with popular tourist attractions, English is even more widely used on signs in order to provide useful information to foreigners. While many people travel to Hong Kong to obtain a sense of worldliness or experience the authenticity of an “exotic” place to gain cultural capital, they may find themselves gravitating towards familiar brands such as Louis Vuitton and Gucci. Most of the businesses in cosmopolitan areas such as Central target an ethically-diverse customer base, therefore the symbolic meaning of the language on signs would be different based on the reader (Leeman & Modan, 351). For example, Landmark Atrium showcases major fashion brands and restaurants, however a great majority of these are international and most of the products have few cultural similarities with Hong Kong styles. However, the sign at the top of the mall still has Chinese characters beside it, in part to provoke the sense that it is distinctive due to its locale (Leeman & Modan, 354). 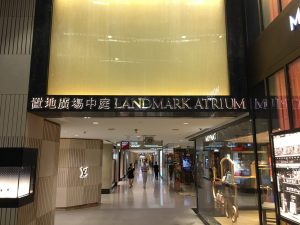 The neighborhood of the area we live in emphasizes the differentiation between very urban neighborhoods and very locale-friendly neighborhoods. Many Hong Kong locals are attracted towards local Chinese-oriented businesses, such as the kinds that do not offer an English translation along with their menu. Such businesses and restaurants, for example, the one shown below, post Chinese-language advertisements to attract customers from the neighborhood. This Chinese sign shows that the establishment is closely connected to the interactional order that would take place inside the restaurant (Leeman & Modan, 350). For example, it might suggest how people in the restaurant order food, ask about employment, and more. 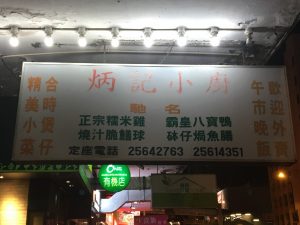 The signs also support the multilingual nature of the area, such as the information given on the parking spot. As seen, about half of the words are in Chinese, and the other half is the English translation. The reading mentions that solely employing Chinese writing for its aesthetic value does not help the strengthening of community in public spaces (Leeman & Modan, 357). This sign’s purpose, however, is to provide information for Chinese people, since tourists would not own private cars in Hong Kong and would often take taxis to get around. Therefore, although both Chinese and English speakers can gain the same information from the same sign, the Chinese locals reap the most benefits. Overall, it seems that the linguistic landscape of Hong Kong consists of bilingual signs that express symbolic meaning to both the local people and visitors. 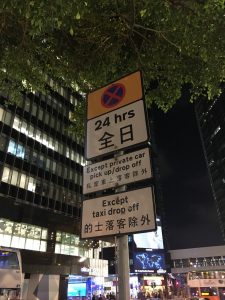 Leeman, Jennifer, and Gabriella Modan. “Commodified Language in Chinatown: A Contextualized Approach to Linguistic Landscape.” Journal of Sociolinguistics, vol. 13, no. 3, 2009.