Living in Singapore, has provided me with a firsthand vantage point of a confluence of people from different cultures living together peacefully. Singapore is one of the most unique countries in the world because although the main official language is English, there are many other languages that are spoken and widely used as well due to the high diversity of the country. The other three languages include Malay, Mandarin and Tamil. Although English is the language that is spoken the most and is used in both school and work, Singapore does a great job incorporating the other 3 languages especially in common things like street signs and instructions on using the MRT, which is Singapore’s public transportation system.

Although English is not a language of a major ethnic group in Singapore, it was adopted as the main language solely to unify the multicultural community who all speak their own native languages. Therefore, since most Singaporeans speak two languages English, and another language corresponding to their race, most public and even individual signs around Singapore are written in 4 different languages to support the multilingual communities as you can see in this example picture. 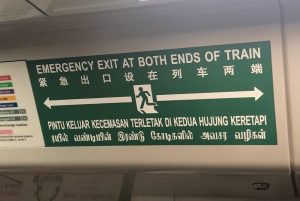 While walking around the mall or down the streets in Singapore you are constantly hearing a plethora of different languages. Some are speaking in English while others are speaking in Mandarin, which is the largest spoken mother tongue language. In fact, often times when I’m with Singaporeans they will still communicate in Mandarin and often keep switching back and forth from Mandarin to English. Although Singlish is not an official language, it is also widely spoken especially in informal settings by Singaporeans. The best way to describe Singlish is that it is a colloquial form of English that has a distinct accent, most often times ignoring standard English grammar. It’s a mix of vocabulary from both local slang and a combination of expressions from the assortment of languages and dialects spoken in Singapore. However, whenever something is publicly written it is written in proper British English using the correct grammar unlike what Singlish is.

Since Singapore is such a diverse country representing many different ethnic groups, multiple cultural neighborhoods exist allowing you to be able to immerse yourself in the full cultural scope of Asia. These ethnic districts represent different places in Asia that comprise the most populated groups of people in Singapore going from Chinatown to Arabtown to even Little India. Each district makes you feel like you’re in a whole new country from the language that is being spoken to the food that is served and lastly the signs that are written in the languages that are specific to the neighborhood like seen in this example of signs that were taken in Chinatown. 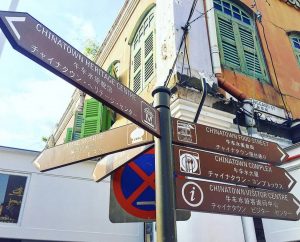 Like Landry and Bourhis stated in their article published in 1997, “the language of public road signs, advertising, billboards, street names, place names, commercial shop signs, and public signs on government buildings combines to form the linguistic landscape of a given territory, region, or urban agglomeration,” (p.333) the multitude of different languages that make up the signs within Singapore are what make Singapore so unique. The 4 different languages that are also displayed on these signs everywhere around the country, or even the signs that are specific to certain ethnic districts carry sociosyomblic importance as it is used as a tool to identify and serve as a symbol of different communities and societies.