Prior to coming to Singapore for my internship, I did some research on the language of the region. I was surprised to learn that Singapore had a not one, but four official languages; English, Malay, Tamil, and Mandarin. I was shocked and interested to experience firsthand how a small country with such a diverse group of languages and cultures could exist together and efficiently communicate between the different cultural groups. After arriving in Singapore, I have since come to the conclusion that Singapore operates using English as a universal language, understood by all major ethnic groups and used when communicating interculturally. In contrast, when speaking to a member of the same ethnic group, the shared native language is preferred over English. This theory is also applicable to signage and documents, with all official road signs being written in English usually with subtitles in Mandarin, the language of the largest ethnic group in Singapore. In neighborhoods dedicated to a specific ethnicity (Little India, Arab Street, etc.), the heritage language replaces Mandarin as a subtitle.

As previously stated, all verbal communication between ethnicities is in English. I would attribute this to Singapore’s education system, which officially teaches only in English. As such, nearly all individuals have been taught, or at least exposed to, English throughout the majority of their lives. Nearly all of my interactions with native Singaporeans have been in English, with comprehension on both sides of the dialogue. The exception is when I encounter older people, who I assume were not raised with the Singaporean education system due to the country’s young age (only 53). However these individuals only constitute a minority of the population. I found this surprising, as there is a large number of migrants who came from other East Asian countries who were not taught English, but it appears they gain enough everyday exposure to the language that they quickly pick it up. It is notable to say that Singaporeans speak a slight variation of English called “Singlish”, but the differences are minute enough that I can easily understand without any confusion. 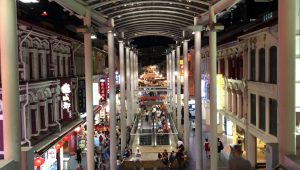 Communication between members of the same ethnicity, on the other hand, is quite different. In these cases, both individuals prefer to speak their native language over English or Singlish. Knowing that both parties speak English, this is evident of language being used as an sign of culture, with the use of a shared native language highlighting a shared history and cultural background between the two individuals. It is for this reason that a shared second language is prefered in this context over the standard English communication. Again, there exists an exception to this rule; young people. Through my observations, I have noticed that young people (aged 15-30) generally speak English to one another, even when members of the same ethnic group. This is a sign of westernization of culture in Singapore, with younger Singaporeans being increasingly exposed to western media (movies, television, etc.) as well as social media. It would appear that due to globalization, that many younger Singaporeans are opting for the language of “pop culture” over the language of their native culture.

Written language and signage shares a similar system. All official signs, whether it be road signs, subway maps, or official documents, are written in English. This is likely intentional on the part of the Singaporean government, similar to the Leeman and Modan argument of linguistic landscape as  “ideologically charged constructions”. Singapore wants to appear as a hub of business and trade, on par with the western world. They also want to attract western businesses, acting as the business hub of Southeast Asia. For this reason, they use English as a construction to appear more western and accomplish their goals. However, they still must cater to their main Chinese ethnic group, and use Mandarin subtitles on most printed text. In the ethnic neighborhoods, the previously mentioned subtitles are replaced with the language of the respective ethnic group. 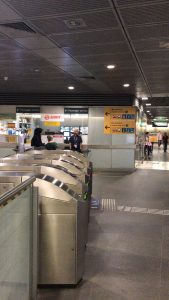 Taking into account both verbal and written landscape I would make the argument that Singapore acts as a great case study for the Leeman and Modan paper. In the majority of cases, the use of language is intentionally constructed, meant to convey a specific meaning through its use of language. Unfortunately, I am not proficient in any languages other than English to make a comparison of the other factors Leemand and Modan cited as aspects of linguistic landscape such as “communicative force.” I can only assume that the different languages provide a similar tone and ideational meaning to one another.

One Reply to “Linguistic Landscape – Singapore”