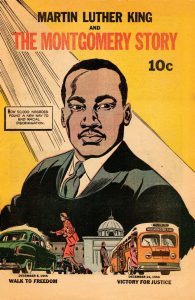 A 1957 comic that inspired John Lewis to create his “March” graphic novel series.

Black History Month, also known as African-American History Month, reflects on the struggles, historical figures, and movements that have occurred within the history of those of African lineage. While many people around the world celebrate figures like Malcolm X and Martin Luther King Jr., most do not know the history behind this observance, which is celebrated annually in February in the United States and Canada.

It all began with a historian named Carter G. Woodson. Woodson was passionate about representing black culture and when he teamed up with the Association for the Study of Negro Life and History, they declared the second week of February “Negro History Week.” They specifically chose the second week of February because Frederick Douglass and Abraham Lincoln were both born during this time. Their birthdays have been celebrated since the late 19th century and Woodson believed that this would be the perfect time for all members of society to not only reflect on Douglas and Lincoln’s legacy but also to reflect on the struggles and victories that are associated with black culture. As Negro History Week began to spread, it was adopted by public schools nationwide. Eventually its name was changed from Negro History Week to Black History Week to Black History Month.

If you want to know more about Black History Month, check out the display at Oxford College Library! We partnered with Oxford’s Black Student Association (BSA) to select our favorite books celebrating African-American history and culture. A highlight is a signed edition of the March graphic novel series by Georgia Congressman John Lewis.