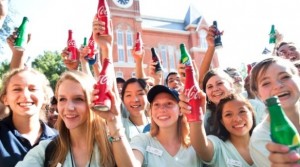 One of the many traditions help here at Oxford College of Emory University is the prestigious Coke Toast. However, many do not know how it came to be. While the Emory University has had this long standing tradition longer, Oxford adopted this tradition in 2009.

On the first day of orientation, Oxford College begins with the Coke Toast celebrating the beginning of a new year. “’As first-year students, it’s important that they have this common bond and this tradition to kick off the next four years,’ says Rhiannon Hubert, director of orientation at Emory University’s Atlanta campus” (Priselac, 2014).

This tradition began through Emory’s close ties to The Coca-Cola Company that has lasted over 150 years. These ties began through one of Emory’s first presidents, Warren Candler (whom Candler Hall is named after). Warren Chandler’s brother, Asa Chandler, was the founder of The Coca Cola Company, and through the insistence of the his brother, Asa donated $1 million and 72 acres of land to Emory University. It was through his generous donation that Emory University moved from Oxford to Atlanta.

Over the years, this Coke Toast had become an integral part of both Main Campus and Oxford College’s traditions. Especially the year where it broke a Guinness World Record. On June 2, 1982, over 2,000 community members of Emory University came together and broke the Guinness World Record for the largest non-alcoholic toast in Guinness history. While this record has been broken since, Emory students have not been able to meet this number yet. 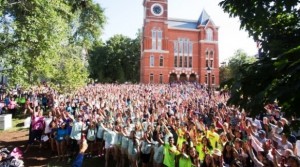