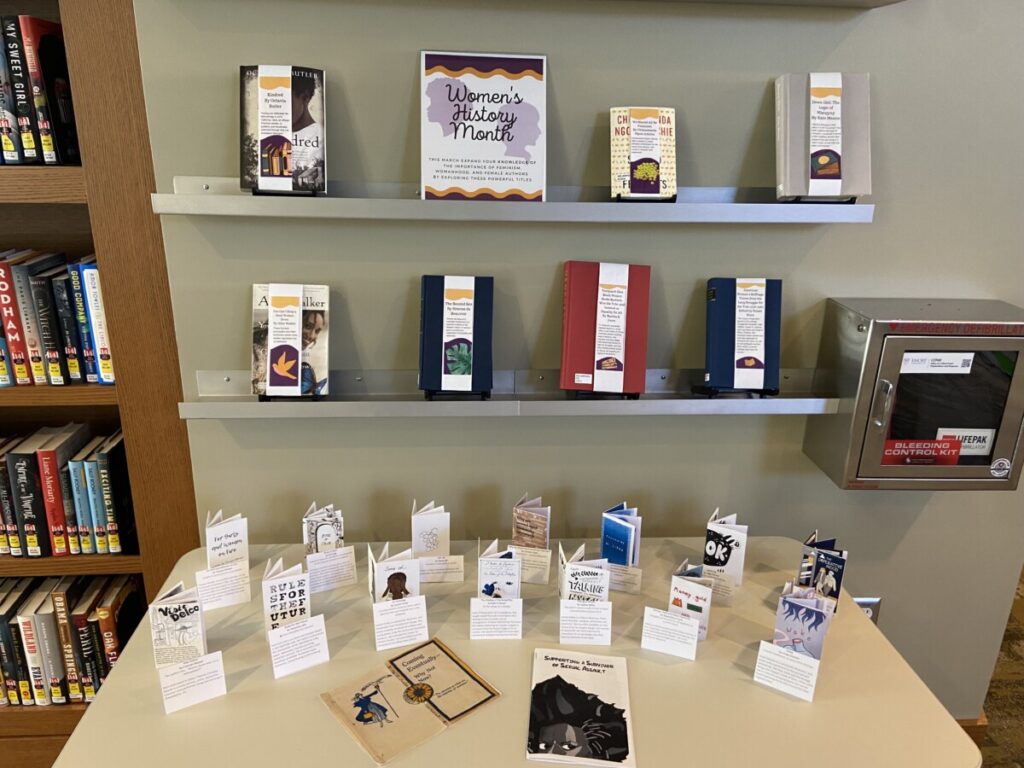 As we enter Women’s History Month this year, it is incredibly important to recognize the female authors and writers who have shaped our literary world. Though it may be hard to believe, less than one-third of the winners of the Pulitzer Prize for Fiction in all its history have been women. Even more disparaging, women constitute just a mere 16 of the 117 Nobel prize winners in literature. To help emphasize the underrated impact women have on literature, we have compiled a diverse selection of novels, memoirs, essays, and zines that highlight the diversity and expansive influence that women have on what we read.

For the Women in Fiction section of our display, we chose to include selections from a wide array of genres and time periods. First is The Girl with the Louding Voice, a contemporary novel by Abi Daré that tells the unforgettable coming of age story of Adunni, a teenage girl living in a rural Nigeria, as she finds her voice and fights for her dreams. Our second selection is Kindred by Octavia Butler, the first science fiction written by a Black woman. This powerful novel combines topics of slavery, fantasy, and historical fiction to tell the compelling story of Dana Franklin as she travels back and forth through time.

Our display also contains a section titled From Her Life, devoted to inspirational memoirs and autobiographies written by women. In this section, we have included Reading Lolita in Tehran by Azar Nafisi, in which Nafisi, a teacher, recounts her experiences returning to Iran during the revolution, her refusal to submit to the strictures of Iranian society, and the liberating power of literature. Along with this is Know My Name by Chanel Miller, a transformative story of trauma, healing, and what words can do written by the initially anonymous victim in the Brock Turner sexual assault case.

The third section of our display, On Feminism, includes striking  essays and philosophical arguments on the topic of feminism. In We Should All Be Feminists by Chimamanda Ngozi Adichie, one of the selections for this section, readers are given a humorous but informative take on what feminism means in the twenty-first century. Our second selection, Down Girl: The Logic of Misogyny by Kate Manne, explores the impact of misogyny in public life and politics.

This March, expand your knowledge of the importance of feminism, womanhood, and female authors on literature by exploring the powerful titles featured in our Women’s History Month display.