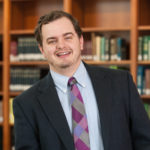 Reading recommendations this week come from the shelves and playlists of Pitts’ Reference & Instruction Librarian, Brady Alan Beard! Brady not only manages Pitts’ reference services for the Candler and Emory communities, but is also finishing his dissertation as a candidate in Emory’s Graduate Division of Religion Hebrew Bible program. When he’s not writing, you’ll probably find him leading instructional sessions, conducting research consultations, or searching for access to remote resources for Emory faculty, students, and staff.

Brady’s first recommendation falls in line with his doctoral discipline, Dress and Clothing in the Hebrew Bible: For All Her Household are Clothed in Crimson, edited by Antonios Finitsis (T&T Clark, 2019). This book explores one of the most basic and fundamental aspects of human life in the Bible, clothing. Brady explains that until he read this book, he “hadn’t fully realized the importance of clothing in the Bible.” The essays in this collection bring together “dress studies” and biblical studies to help readers understand how dress and clothing impact biblical narrative. This book represents a growing area of biblical studies, and Brady recommends it to anyone interested in a fresh scholarly conversation. Readers can find this book at Emory, other academic libraries, or for purchase online.

Take a break from the books with Bradys next suggestion, I Am Not Your Negro (Madmen Entertainment, 2016), an Oscar-nominated film based on a 1979 letter that James Baldwin, the eminent Black writer, sent to his book agent. The letter describes what would have been his next project, “Remember This House,” which would have explored the assassinations of  Medgar Evers, Malcolm X, and Martin Luther King, Jr., all three, close friends of Baldwin. The film, narrated by Samuel L. Jackson, places Baldwin’s letter alongside video clips and images from Baldwin’s life and time, juxtaposed against contemporary images and clips. Brady remarks that the result is a “compelling and insightful essay-like film that depicts Baldwin’s piercing cultural and historical analysis at its best.” Emory users can view this film online, and others can stream it for free at pbs.org.

Brady’s last recommendation is Dolly Parton’s America. This podcast, hosted by Jad Abumrad and produced by Shima Oliaee at WNYC Studies, is a nine-part series documenting the life of Dolly Parton and her lasting impact on American culture and music. The podcast opens a window not just into Dolly’s life, music, and enormous personality, but also into Southern culture, religion, and politics. Each episode includes interviews with friends, relatives, “Dolly scholars,” and the woman herself. As you might expect, Brady calls this podcast “as fun as it is insightful!” Listen for free online at www.wnycstudios.org or on Apple Podcasts.