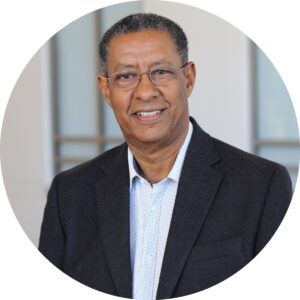 After 32 years of service, Fesseha Nega is retiring from the Cataloging Department at Pitts Theology Library. First hired in May 1989, Fesseha has been the longest serving staff member of the Theology Library. He has served under 3 Library Directors (Channing Jeschke, Pat Graham, Bo Adams), 4 Seminary Deans (James Waits, Kevin LaGree, Russ Richey and Jan Love) and 5 University Presidents (James Laney, William Chace, James Wagner, Claire Sterk and Gregory Fenves). During this time, he has also seen and met some remarkable people who have passed through the seminary in one capacity or another, including Archbishop Desmond Tutu and Stacey Abrams, who used to visit the library as a child while her parents were pursuing degrees at Candler.

Fesseha was born in Ethiopia and grew up in Addis Ababa. He first came to the United States in 1973 to study Mathematics and Economics at Northeastern University in Boston. The following year, Ethiopia was plunged into turmoil when the country’s log serving Emperor Haile Selassie was deposed by a Communist putsch and replaced by the Derg military junta of Mengistu Haile Mariam. Rather than returning home to political and economic uncertainty, Fesseha decided to stay in the United States, first in Boston and eventually in Atlanta. 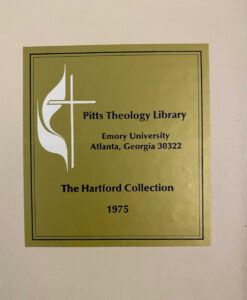 Fesseha’s contribution to the library in general and to the cataloging department in particular can hardly be overstated. When he began his tenure at Pitts, the library had a card catalog and one dedicated computer where catalogers would take turns entering bibliographic records in OCLC. A source of deep institutional memory, Fesseha cataloged materials in English, French, German, Latin and several other languages and has processed countless books, pamphlets and microfiches. For years he watched over the physical quality of the library’s collection by examining books in the stacks or donations for brittleness and stability and he has supervised numerous student assistants charged with marking and processing books before they are placed on the shelf. Fesseha was also pivotal in processing Emory’s purchase of over 200,000 volumes from Hartford Theological Seminary, which was at the time one of the most significant theology collections in America. Throughout all this, Fesseha has been one of the most collegial and congenial co-workers anyone could wish for. He was dedicated to his work and even more to his family, at times working a second job at DeKalb Public Libraries in order to afford a private school education for his children.

When asked about Fesseha, former Pitts Library Director Pat Graham reminisces fondly: “I remember when Fesseha was hired as a cataloging assistant, and so for the next two years he and I both learned cataloging under the tutelage of David Chen. He became an expert cataloger (and I moved to Reference), on whom the department depended for African acquisitions and consultations regarding some Ethiopian materials that lay beyond the ken of us all.  In addition, Fesseha’s productivity was a delight to see each month, when cataloging statistics were reported–in terms of items processed, I believe he set records for the library that have never been surpassed. Finally, Fesseha’s kind and courteous demeanor, his calmness and subtle sense of humor, and his constant friendship nourished all who knew him at Pitts. We were all honored to call him ‘colleague.’” Former Periodicals Librarian Cindy Runyon echoes these sentiments, saying that Fesseha “has indeed been a valued team member …  plugging along in his modest way.”

Fesseha will be missed by everyone at the library, but we all wish him the very best for his well-deserved retirement.