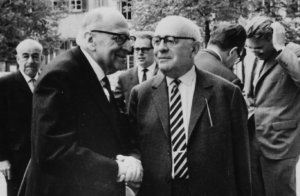 Theodor Adorno was a philosopher, critic, and theorist who generated a vast body of works on many aspects of society and culture. His interests ranged from classical philosophy to psychology to music to sociology.  He wrote on topics as far-flung as Beethoven, antisemitism, and film.

Adorno is best known as a member of the Frankfurt School, the informal name for a group of thinkers employed by the Institute for Social Research in Frankfurt, Germany. These intellectuals developed and practiced a mode of understanding called critical theory (see key terms below). Other famous members of the Frankfurt School include Max Horkheimer, Walter Benjamin, and Herbert Marcuse. The Frankfurt School theorists all shared a profound indebtedness to the work of Karl Marx. Adorno was also influenced by Hegel, Kant, Heidegger and Lukacs.

Adorno’s writing is notoriously difficult to understand, and he has occasionally been criticized on this account. But, as is the case with deconstructionists such as Gayatri Spivak or Jacques Derrida, Adorno’s form enacts his content. Those unfamiliar with Adorno’s work are encouraged to take up the challenge; careful reading is rewarded with immense richness of theoretical and critical material.

On September 11, 1903, Theodor Ludwig Wiesengrund was born in Frankfurt am Main. The son of a Jewish wine merchant, Oskar Wiesengrund, and a Catholic from Corsica, Maria Calvelli-Adorno, Adorno adopted his mother’s surname during the late 1930s while in exile from Nazi Germany. Adorno began studying music and philosophy at a young age. His mother was a professional singer, and his aunt, who lived with the family, was an accomplished pianist. As a teenager, Adorno studied Kant with a family friend, Siegfried Kracauer, who later became a noted cultural critic and film theorist in Weimar, Germany. Adorno attended the University of Frankfurt, where he took courses in philosophy, sociology, psychology and music. At age 21, he submitted a critique of Husserl entitled, “The Transcendence of the Real and the Noematic in Husserl’s Phenomenology” as his doctoral dissertation. From 1925-1928, Adorno studied music in Vienna under Alban Berg with hopes of becoming a composer. He retained an interest in music for the rest of his life.

During the mid to late 1920s, Adorno formed a network of acquaintances with whom he would collaborate for the rest of his life. Through his friend Max Horkheimer, Adorno met the members of the Institute for Social Research and other leading thinkers of the day, including Leo Lowenthal, Friedrich Pollack, Ernst Bloch, Bertolt Brecht, Kurt Weill, Walter Benjamin, and Herbert Marcuse. Adorno was an unofficial member of the Institute, contributing articles to its journal. In 1931, Adorno assumed a teaching position at the University of Frankfurt, but just two years later was forced to resign by the Nazi regime. The Institute, under Horkheimer’s direction, immediately left Germany, settling briefly in Geneva and then eventually in New York. Adorno, who was not officially employed by the Institute, was left behind. He enrolled at Oxford as a means of leaving the country.

By 1938, Horkheimer had arranged a job for Adorno working under Paul Lazarsfeld at the Princeton Radio Project. Adorno reluctantly left Europe at Horkheimer’s urging. Adorno contributed to a number of Institute projects; most notably, Adorno collaborated with Horkheimer on the book Dialectic of Enlightenment, a classic text of critical theory, and Adorno developed the F-scale, an analytic tool used to identify personality types amenable to fascism. Despite Adorno’s professional success, he was never completely happy in the United States. In 1949, Adorno, Horkheimer and Pollack returned to Frankfurt to reestablish the Institute. The next twenty years were an amazingly prolific period for Adorno. He wrote dozens of books, essays, and articles on a variety of topics. Perhaps two of the most important books were Negative Dialectics (1966) and the posthumously published Aesthetic Theory (1970).

The political climate of the university during the 1960s placed Adorno in an awkward position. Activist student groups initially embraced his works for what they perceived to be a rejection of bourgeois values, but became infuriated by Adorno’s reluctance to support sit-ins and demonstrations. In the introduction to Negative Dialectics (1966), Adorno revealed the incompatibility of his theory with political praxis. He claimed that “praxis must be a response to a correct and indeed contemporary interpretation of experience,” an interpretation that was (and is always) still awaited (O’Connor 54). Students condemned his theories as impotent and outdated; they disrupted Adorno’s lectures and humiliated him with flowers and kisses. Embarrassment and distress at this sort of public reception caused a strain on Adorno toward the end of his life. He died of a heart attack in 1969.

AESTHETIC THEORY: Adorno asserts the “priority of the object in art,” or what is called a materialist aesthetic, in contrast to the idealist aesthetic of Kant which privileges the subject over the object (Jarvis 99). For Kant, the experience of art is a product of the perceptions of the subject. For Adorno, the art object and the aesthetic experience of the art object contain a truth-content. Truth-content is a cognitive content “which is not exhausted either by the subjective intentions of its producers or by the subjective responses of its consumers,” and that may be revealed through analysis (Jarvis 98). Whereas Kant conceives of beauty as a subjective experience, Adorno suggests that beauty mediates between subject and object. Beauty is contained in the cognitive or truth-content of works of art. As Adorno writes in Aesthetic Theory: “All beauty reveals itself to persistent analysis” (69). But works of art “are not merely inert objects, valued or known by the subject; rather, they have themselves a subjective moment because they are themselves cognitive” (Jarvis 96). It is in the shared experience of object and subject, the joint analysis, that beauty is revealed.

CONSTELLATION: Adorno borrowed this term from Benjamin. It signifies “a juxtaposed rather than integrated cluster of changing elements that resist reduction to a common denominator, essential core, or generative first principle” (Jay 14-15). This concept can be seen in Adorno’s writing style. Adorno seeks to enact a negative dialectic, in which concepts are not reduced to categorical understandings. By preserving the contradictory and irreconcilable differences of arguments and observations in his work, Adorno maintains the tension between the universal and the particular, between essentialism and nominalism.

CRITICAL THEORY: This is a descriptive term for the philosophical and methodological bases underlying the type of sociology practiced by Adorno and other members of the Frankfurt School. Critical theory is based on the understanding of society as a dialectical entity, and the conviction that “teaching about society can only be developed in the most tightly integrated connection of disciplines; above all, economics, psychology, history and philosophy” (O’Connor 7). It is perhaps easiest to understand what critical theory is by articulating its opposite. During the sixties, the two dominant sociological theories, critical theory and critical rationalism, faced off in what is called the positivist dispute. Adorno’s book The Positivist Dispute in German Sociology is about this debate. Whereas critical rationalism views society as a collection of autonomously determined individuals, critical theory views society as a dialectical totality in which each individual “is determined by its mediation within that totality” (O’Connor 174). These two theories of sociology disagree over the use of empirical research techniques. Critical rationalists believe that identifying and analyzing the opinions of individuals within a society leads to an understanding of the society; critical theorists believe that empirical research techniques cannot give insight into society because they will merely reflect the ideologies that society imposes on individuals. Individuals do not choose ideology; ideology is organically suffused into individuals by the society in which they mature (see Hegemony in Gramsci).

NEGATIVE DIALECTICS: Adorno believes that the standard mode of human understanding is identity thinking, which means that a particular object is understood in terms of a universal concept. The meaning of an object is grasped when it has been categorized, subsumed under a general concept heading. In opposition to identity thinking, Adorno posits negative dialectics, or non-identity thinking. He seeks to reveal the falseness of claims of identity thinking by enacting a critical consciousness which perceives that a concept cannot identify its true object. The critic will “assess the relation between concept and object, between the set of properties implied by the concept and the object’s actuality” (Held 215). The consciousness of non-identity thinking reconciles particular and universal without reducing qualities to categories.

UTOPIA: The concept of utopia represents potential. In Adorno’s work, utopia’s “perennial aim is to resist the liquidation of the possibility of really new experience” (Jarvis 222). This is evident in Adorno’s discussion of utopia in relation to art in Aesthetic Theory. What is “new” is only one concretized potential that by its manifestation indicates the existence of the other potentials that have not been realized. Adorno uses the metaphor of a child sitting at a piano “searching for a chord never previously heard. This chord, however, was always there; the possible combinations are limited and actually everything that can be played on it is implicitly given in the keyboard. The new is the longing for the new, not the new itself” (Hullot-Kentor 32). Utopia is the negation of what exists, so that a certain utopia depends upon utopia not actually existing. Once utopia is captured, it can no longer be utopia.

Some Books and Essay Collections Available in English