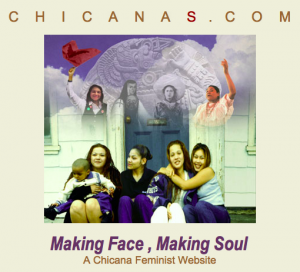 “Chicana” refers to women of Mexican descent who are born and/or raised in the United States. Although the term is widely used by Chicana activists and scholars today, many Chicana women debate the term’s origin and early connotations. Some believe that the term originated with the indigenous Mexica (Meh-sheik-a) tribes of Mesoamerica while others claim that the word was originally used by colonizers as a racial slur. During the 1960s and 1970s Chicano Nationalist Movement, Mexican-American women reclaimed the term Chicana (www.chicanas.com).

Chicana women embrace a long and complicated political activist history, dating as early as the US-Mexico War of 1848 and the Mexican Revolution in 1910.  Both events drove Mexican families to settle in U.S. colonized territories, such as El Paso, San Antonio, San Diego, Los Angeles, and Santa Barbara  (see Mora and Del Castillo, Ruiz, and García). The Chicana Feminist Movement formally began to take shape in the 1970s during the height of the Chicano Nationalist Movement. Ironically, as Chicana women were fighting along side Chicano men in their struggle to rid U.S. political and social structures of inequalities, they began to realize the gender inequalities that existed within and outside of the movement (see Gender and Nation). During this time, Chicana women found a collective voice through feminism and began to question machismo (sexist) attitudes, articulating their own criticisms and concerns involving issues of gender and sexuality, and organizing around these issues (Garcia) (see Gloria Anzaldúa). In May, 1971, over 600 Chicana women gathered together in Houston, Texas, for The First National Chicana Conference. Chicana women gathered successfully in support of several resolutions, including calls for legalization of abortion; equal access to education; the establishment of child-care centers; and the abolition of traditional marriages. Despite their efforts, Chicana feminists did not find their voices welcome within the Chicano National Movement or the larger “White” Feminist Movement (Saldivar-Hull 31). Chicana Feminists found themselves on the border (see Third World and Third World Women).

Since its organization in the 1970s, the Chicana Feminist Movement has expanded to include a wide range of theoretical, literary, and activist discourses. Incorporating postcolonial theories, Chicana feminists deconstruct and challenge dominant racist, sexist, classist, and heterosexist paradigms. Chicana theorists analyze how the effects of colonialism continue to thrive within US borders in new and more complicated and invisible forms. In her pivotal work Borderlands/LaFrontera: The New Mestiza, Gloria Anzaldúa writes that dominant colonial discourse creates borders that divide geographic as well as theoretical space, placing those considered as Others on the margins. Chicana women are constantly on the border between their American and Mexican heritage.  Although this border was set up by colonizers to divide, Anzaldúa reclaims the border as a transitional space where a new mestiza consciousness can be formed and enacted. Chicana women can, then, claim both their Mexican and American identities (see Mimicry, Ambivalence and Hybridity).  An important process in this reclamation and recovery of identities is the rewriting of history so that it includes Chicana women’s experiences.  In The Decolonial Imaginary:  Writing Chicanas into History, Emma Pérez draws upon Michel Foucault and Homi Bhabha’s theories of silence, translation, and negotiation to create a theory of decolonial imaginary. This theory exists in the time lag between the colonial and postcolonial and offers a vital space for rethinking history in a way that makes Chicana/o agency transformative as opposed to traditional colonial histories within which the voices of Others are silenced.

Chicana literature has become vital to Chicana feminists’ efforts to challenge dominant stereotypes of Chicana culture. This literature allows Chicana authors the space to share their varied experiences. Many Chicana authors have experienced success within and outside of the Chicana community. Some of the most prominent authors include Sandra Cisneros, Ana Castillo, Denise Chavez, Lorna Dee Cervantes, Cherríe Moraga, and Gloria Anzaldúa.  Chicana feminist literary theory has also become an essential part of both Chicano/a and literary studies. Several texts, such as Infinite Divisions:  An Anthology of Chicana Literature, Women Singing in the Snow, Chicana Ways, and Chicana Creativity and Criticism, highlight Chicana literary theory and texts.