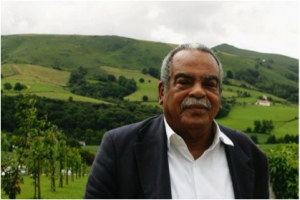 Edouard Glissant was born in Saint-Marie, Martinique in 1928 to a family of five children. His father was working as an agricultural manager, or ‘géreur d’Habitation’[1], and directly exposed the young Edward to the colonial reality. During childhood, he moved to Lamentin, the second most populated city in Martinique, where Glissant discovered primary school and the strictness of the third republic school system, where children were forbidden to speak Creole. Being the brilliant student he was, Glissant received a scholarship in 1938, allowing him to attend the prestigious Schoelcher[2] High School in Fort-de-France, the capital of Martinique, where the famous Aimé Césaire[3] studied before him.

In 1946, Glissant, determined to continue his studies, left his natal island for the first time and set out for Paris. There, he studied at La Sorbonne and bonded with several ‘Antillais,’ or West Indians, most notably Frantz Fanon. He graduated with a Bachelor’s degree in philosophy and a graduate degree in ethnology under the supervision of French philosopher Jean Wahl. Upon his return to Martinique in 1953, he mainly published his works in the journal of a close friend, Maurice Nadeau, called Les Lettres Nouvelles (The New Arts).

Glissant’s popularity rose in 1958 when he published La Lézarde (The Ripening) and won a prestigious French literary award, the Renaudot Prize. With his literary career flourishing, the young writer chose to participate politically in the anti-colonialist movement, working specifically withinin the black writers and artists movements. After this experience, Glissant founded Le Front Antillo-Guyanais (The Antillean-Guyanese Front) with other writers, such as Béville and Corsnay Marie-Joseph, and fought for the independence of the French West Indies and Guiana from France’s rule. The difficult situation of 1961, notably the start of Algerian war of independence, commanded the dissolution of the group. By order of the French president, General De Gaulle, Glissant was arrested, forbidden to reside in the West Indies, and was sentenced to administrative detention in France until the situation in the colonies calmed down.

In 1965, Glissant returned to Martinique and devoted his time to writing novels, poetry and plays. In 1981, he published one of his most famous essais, Le Discours Antillais, in which Glissant discusses the Antillean reality from multiple approaches—literary, sociological, historical, and anthropological. In the same year, he was appointed Director of the UNESCO Courier, a magazine which publishes current events such as education, development, and climate change, and economic and political crises.

1988 marked the beginning of his American career; Glissant accepted a distinguished professor position at Louisiana State University (LSU). Louisiana gave Glissant the opportunity to see the expansion of creole cultures in the United States. In 1990, he published his most recognized essay, Poètique de la Relation (Poetics of Relation), wherein his philosophy towards languages and cultures lies. In 1992, Glissant was chosen as finalist for the Nobel Prize in Literature; unfortunately for him, the writer Derek Walcott won by one vote. After this, Glissant moved to New York City, where he took a new position as chair of the French department at CUNY. Here, he received numerous Doctorat Honoris Causa from universities around the world as well as several literary prices. In 1993 and in 1997, Glissant respectively published one essay and one novel called Tout-monde and Traité du Tout-monde, in which he described the consequences of globalization. In 2007, Glissant created L’institut du Tout-monde in Paris, which exposed his notions of Relation and Tout-Monde – two principles of openness. In 2011, Glissant died at the age of eighty-two in Paris.

Born in the 1960s, Antillanité was a movement that aimed to restitute a West Indian identity to the Antilles. The concept was created from a general discontent with the French system of assimilation, which did not allow differences within a national sameness. It also intended to distance Césaire, Damas and Senghor’s Négritude, which advocated the return of black heritage to the French colonial system. Antillanité recognized a diverse mixture in cultures that composed the Antillean identity – an openness that gathered different civilizations to create a creole individual. Eight years after Glissant’s Discours Antillais, Patrick Chamoiseau, Raphaél Confiant and Jean Barnabé published Eloge à la Créolité (In Praise of Creoleness), a literary tribute to Glissant in which they expand the concept of hybridity.

“Neither Europeans, nor Africans, nor Asians, we proclaim ourselves Creoles.” (Barnabé et al).

This concept is an evolution in the thought of Glissant on Antillanité. Creolization is the result of relations between cultures or several elements resulting in different identities. Glissant added one essential notion to this formation—unpredictability. This singular element distances hybridization from creolization; the former indicates an expectable effect contrary to the latter. Céry explains that “Creolization is hybridization with an added value which is unpredictability” (Edouard Glissant: Une Pensée Archipélique). It is necessary to note that Glissant uses the word ‘creolization’ rather than ‘creoleness’ to emphasize the continuous process of this mixture.

“Creolization, one of the ways of forming a complex mix, and not merely a linguistic result, is only exemplified by its processes and certainly not by the ‘contents’on which these operate. This is where we depart from the concept of Creoleness” (Glissant 89).

“What I call Tout-Monde is our universe—the way it changes and lasts by exchanging and, at the same time, the ‘vision’ we have of it” (Glissant, Treatise on the Tout-Monde, 176, translated by Charly Verstraet). Treatise on the Tout-monde underlines the notion of relation, which recognizes and accepts diversity in the global world we live in today. In this specific term coined by Glissant, Tout-monde quantifies all the differences present in the world.

Glissant advocates the multiplicity of cultural identities in an individual and borrows Deleuze and Guattari’s expression of “rhizome” (rhizomatic) to expose the complexity of the creole identity. The Rhizome is a plant that grows underground and has roots that grow around other roots. Glissant applies it to creolization where roots meet and share cultural bounds to form an identity.

“Rhizomatic thought is the principle behind what I call the Poetics of Relation, in which each and every identity is extended through a relationship with the Other” (Glissant, 11).

In 1981, Glissant published one of his most preeminent essays, where he discusses the Antillean culture as a whole. He exposes a historical analysis of the islands through the system of plantations, the social scale with whites at the top and Africans and Hindus at the very bottom; through this analysis, Glissant aims to reduce the impact of assimilation to give “voice” to the Antillean culture. He notably discusses the language of compromise, the creole, and the composite of civilizations that are part of the Antillean culture. This essay embodies the return of a culture, history, and literature of which the Antillean people have been deprived. Glissant, however, replaces this concept by introducing a new idea of relation, indicating the evolution of the writer’s reflection.

Poetics of Relation is Glissant’s most acclaimed essay and marks the significant turning point in the writer’s way of thinking. His entire essay centers on this idea of Relation in creole cultures. He advocates the openness to the unknown, to the unpredictability. In his essay, Glissant tackles the questions of orality and literacy; translated texts and original texts; transparency and opacity; the relative and chaos; and creolization and rhizome identity among many others. Although this essay uses the creole approach to determine these terms, Glissant expands “creolization” to the world in his 2007 essay, Traité du Tout-monde (Treatise on the Tout-monde).

[1] Géreur d’Habitation was the individual who was managing agricultural properties and making management decisions in regards to the farming. It was a profession used during the colonial time of the Caribbean and it was usually a béké (a Martiniquean from white lineage).

[2] Schoelcher was a 19th-century abolitionist writer who worked for the abolition of slavery, notably in the French West Indies.

[3] In 1940, Césaire was appointed professor of philosophy in the Schoelcher High School but did not have Glissant as a student.

The Postcritical Turn and Postcolonial Studies