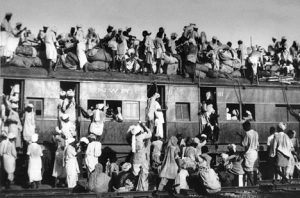 He got down to work, to the task of settling the fate
Of millions. The maps at his disposal were out of date
And the Census Returns almost certainly incorrect,
But there was no time to check them, no time to inspect
Contested areas. The weather was frightfully hot,
And a bout of dysentery kept him constantly on the trot,
But in seven weeks it was done, the frontiers decided,
A continent for better or worse divided.

While history books debate the political reasons for Partition (see Partition of India), attempts at writing a social history are relatively recent. Feminist historiographers like Ritu Menon, Kamla Bhasin, and Urvashi Butalia were some of the first to attempt such a history where they tried to write women’s experiences of Partition back into the archive by recording and analyzing oral histories in Borders and Boundaries and The Other Side of Silence respectively. Though memory can be as an unreliable witness, as these authors note, it also provides a window into the “human dimensions” of history.

The interview excerpts and audio clips included on this page represent one such attempt to record and understand the events around Partition as experienced by people who have since moved to the greater Atlanta area. These interviews were conducted by Emory students as part of their coursework for an undergraduate course on “The Partition in Literature” taught by Deepika Bahri in 2004.

Excerpts have been organized around thematic clusters.

On the Enemy and if Partition could have been avoided:

Message for the future generations: