Based on their low concentrations in mammalian brain, octopamine, β–phenylethylamine, tyramine, and tryptamine are classified as “trace” amines (TAs) and viewed as metabolic by-products. TAs are related to the classical monoamine transmitters and are synthesized from the same precursor aromatic amino acids. The recent discovery of a family of G protein-coupled receptors preferentially activated by TAs rekindled interest in TAs, but without a known circuitry, their function remains elusive and understudied. We now have anatomical evidence of an endogenous TA system in spinal cord, and show that the TAs recruit locomotor circuits and modulate ongoing locomotion. Our newest evidence suggest the TAs represent a parallel biochemical modulatory system that alters circuit function via a membrane transporter shuttling system that operates independent of synaptic actions. The long-term goal is to understand the physiological relevance of the TAs as an intrinsic modulatory system for subsequent therapeutic manipulation of spinal circuit function. 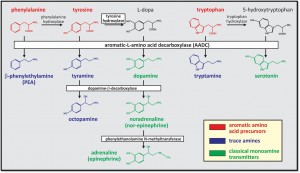 Comparison of monoamine synthesis pathways. The trace amines (TAs) are a group of endogenous monoamines that include tryptamine, tyramine, octopamine and β-phenylethylamine (PEA; blue). The TAs have structural, metabolic, physiologic, and pharmacologic similarities to the classical monoamine transmitters (green) and are synthesized from the same precursor aromatic amino acids (red). Unlike the classical monoamines, aromatic-L-amino acid decarboxylase (AADC; also called dopa decarboxylase) is the only enzyme required to produce them. Conversion from the TAs to the monoamines does not appear to occur. 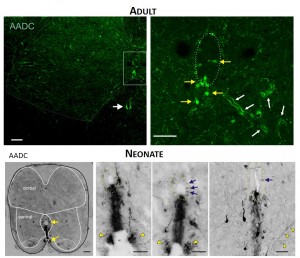 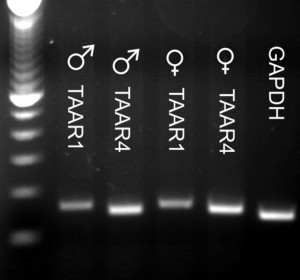 LEFT. Examples of continuous locomotor rhythms generated in the presence of 5-HT and the TAs. Shown are smoothed activity pattern envelopes reporting activity for right (blue) and left flexors (red). RIGHT. Episodic bouts of locomotor-like rhythms are shown for tyramine and PEA at slow (left) and expanded time scales (right). Bar over epochs at left identified expanded waveform at right. Proposed circuit locations for TA-induced modulatory actions in the emergence of continuous and episodic locomotor rhythms. TA-induced slower activity rhythms on neurons that drive the CPG could lead to the episodic waxing and waning of CPG output to motor neurons. Candidate neurons are the lamina X AADC+ D cells. 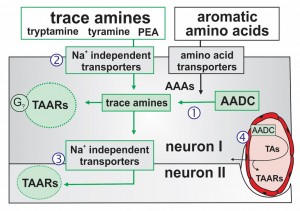