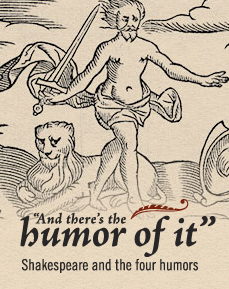 Shakespeare created some of the most memorable characters in literature.  His understanding of human nature and personality was influenced by humorism, an ancient medical theory about how bodily fluids determined a person’s physical and mental health, as well as personality.  The National Library of Medicine’s exhibit, “And there’s the humor of it”: Shakespeare and the four humors, explores the Bard’s allusions to this medical theory in his work and is on view at the Woodruff Health Sciences Center Library through April 22.

As part of the exhibit, Dr. Sheila Cavanagh, Professor of English at Emory University and Founding Director of the World Shakespeare Project, will talk about the exhibit, providing her expert commentary on the four humors and their place in Shakespeare’s writings.  The talk will be held in the Robert W. Woodruff Library, Jones Room, at 11:30 am on April 11, 2017.

A Scavenger Hunt- Now through April 22

Emory students, staff, and faculty are eligible to participate in a scavenger hunt about the exhibit.  Forms are available at the WHSC Library Information Desk and at Dr. Cavanagh’s talk.  Learn about Shakespeare and the four humors while answering eight questions for a chance to win one of four Barnes & Noble gift cards (1 for $30, 1 for $10, and 2 for $5). A drawing from correctly submitted forms will be held after the exhibit closes on April 22, and winners will be notified by email.