After reading the ending paragraphs of the section, it was almost obvious that I formed a relation to the metaphor of the bondsmen in Hegel, to the role of the proletariat in Marxist Theory.  In Hegel, the bondsmen are dominated by the lord, and toil under his vision. Later in the text, the bondsmen use find work as their source of identity, “Work…is desire held in check, fleetingness staved off; in other words, work forms and shapes the thing”(195). It is from work that the bondsmen are able to then form their own identity, one distinct from the role of the lord, “…the bondsman realizes that it is precisely in his work…that he acquires a mind of his own”(196).

Marx, in much the same way, draws inspiration from the work of Hegel. He writes in “The Communist Manifesto” the relationship of the underclass proletariat and their societal struggle with the bourgeoisie, the upper-class that profit from the work of the bondsmen. In his introduction to the Manifesto, Marx even pays homage to the struggle of lords and serfs,

“The History of Society in the past is the history of class struggles. Freemen and slaves, patricians and plebians, nobles and serfs, guild members and journeymen-in short oppressors and oppressed…” (Marx).

For more information about Marx’s work, I accessed, http://www.bl.uk/learning/histcitizen/21cc/utopia/methods1/bourgeoisie1/bourgeoisie.html 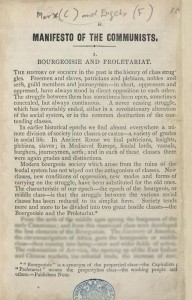 This entry was posted in Identity and tagged hegel, knowledge, Marx, society, Work. Bookmark the permalink.

One response to “Proletariat=Modern-day Bondsman?”