Freire and the Truman Show

While reading Paulo Freire’s, The Pedagogy of the Oppressed, I couldn’t help but relate his depiction of the narrative style of education to the life of Jim Carrey’s character, Truman Burbank, in the satirical film, The Truman Show.

Freire characterizes the “‘banking’ concept of education” as a form of education where the oppressors from the outside world control those who are ignorantly following their orders in the inside world (72). Freire even goes so far as to describe that people in his scenario are simply “in the world, not with the world or with others,” they are merely controlled by those in higher positions within the hierarchy of their society (75). Where this concept directly relates to The Truman Show is when Freire describes how the person in this world is “an empty ‘mind’ passively open to the reception of deposits of reality from the world outside,” indicating that unless someone is part of the higher levels of society, he or she is forever destined to being controlled by those who are, and he or she only receives the “deposits” of information that those in higher positions decide to “deposit” to him or her (75).

Similarly, in The Truman Show, Truman Burbank is the unsuspecting victim who’s life is merely a television show controlled by the producers of the show. Throughout his entire life Truman Burbank went through his daily routine and his life struggles thinking everything was normal, but in actuality he is living in a dome that is manipulated and controlled by the producers of the show. The producers of the show act as the “deposit[ers]” of information and they have the power to control what occurs in Truman’s life as a means of generating more viewers. This directly links to Freire’s point of those inside the world (or in this case the dome) being mindless beings who are controlled by those from the outside world without even knowing it. It further perpetuates Freire’s description of education through Truman eventually figuring out about the artificiality of his life and his quest for revenge and normality. This final quest in the movie is similar to Freire’s discussion of the revolution from the banking style of education to the “‘problem-posing'” form of education (79).

I find it interesting that the principles discussed in Freire’s text are not only applicable to education and to the discussion of society as a whole, but that the same type of critique he makes about the control of unsuspecting victims by oppressive elites is also made in pop-culture. This demonstrates that the principles of philosophy extend far beyond the realm of the classroom and are clearly recognized by people in different positions in society as discussions that need to be had.

Below is a picture of Truman Burbank on the T.V. screen being viewed by the rest of the world. 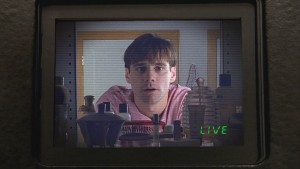 One response to “Freire and the Truman Show”