Sociocultural and Psychological Perspectives on Bilingualism

Posted on March 7, 2017 by Elika Pourbohloul 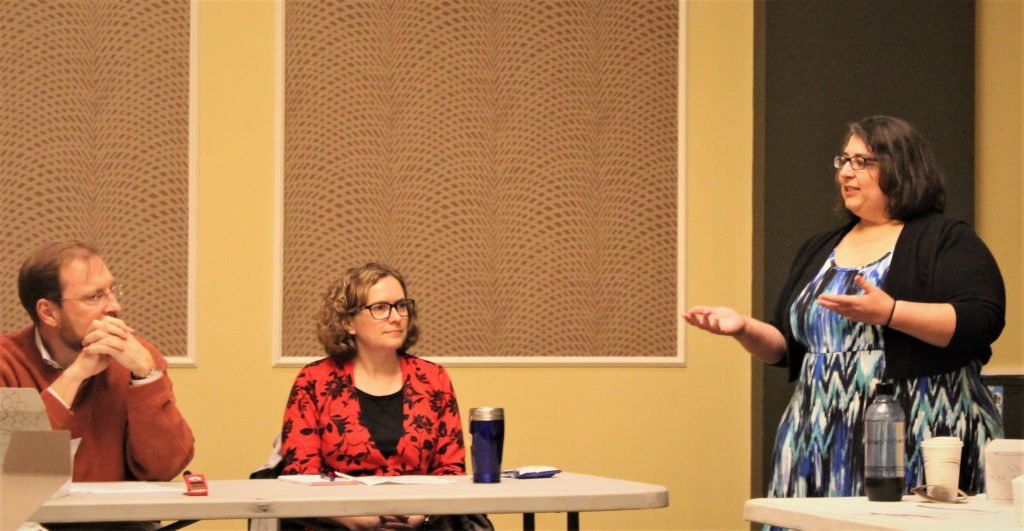 What does “bilingualism” mean as a cognitive process and a sociocultural phenomenon? Last year, Dr. Donald Tuten and Dr. Alena Esposito introduced students to this interdisciplinary topic through a course at Emory sponsored by the CMBC. The course covered different perspectives on bilingualism, including the social contexts that shape (and are shaped by) how speakers use language as well as the relation of bilingualism to neural networks in the brain. It also explored how educational systems may enhance the process of bilingual and cognitive development. A CMBC lunch discussion on January 24, 2017 touched on several of these issues, and highlighted that bilingualism continues to be the subject of popular and scholarly debate.

Their discussion of bilingualism began with the question of ideological framing, or how cultures “think about” language and languages. Dr. Tuten commented on the impact of standard language ideology, which claims that only one language variety is superior and “correct” within a given speech community. In conjunction with nationalism, this leads to the ideology of monolingualism, which holds that use of one language is both superior and “unmarked” or “normal” within a given community or nation-state– an idea that may be summarized in the formula “one state = one nation = one language”. The ideology of monolingualism is reinforced through schooling, media, and other modes of cultural transmission, and affects both popular and scholarly views of language.

The ideologies of the standard and monolingualism favor a view of bilingualism as subversive. Dr. Tuten discussed the usage of Spanish in the United States as an example of collective suspicion towards a non-dominant language, and a common belief that Hispanics refuse to learn English. In reality, and like other bilingual immigrants, Hispanics and Latinos show a generational decline in Spanish-speaking ability as English becomes increasing dominant amongst the second and third generations.

Language ideologies have a demonstrable impact on schooling. Dr. Esposito, for instance, first became interested in studying language as an educator. She observed that training in a child’s non-dominant language had no detrimental effect on test scores in the dominant language. In contrast to myths about second language learning that claimed it would slow cognitive growth in children, recent research demonstrates that there may be cognitive benefit for adults and children alike. In a conversation with the audience about elevating the usage of minority languages in school, Dr. Esposito also mentioned that children in dual language programs have increased appreciation of minority cultures, and children speaking minority languages are empowered by the fact that a teacher is speaking their language.

As a student of anthropology, I am part of a community that studies culture, language, and human evolution. Standard language ideologies are rooted in cultural practices in which some cultures position themselves as oppositional and dominant to others, enabling control of ideas and resources. This has consequences for everyone in a language community, especially minority language speakers: they are always using language according to power imbalances and changing social contexts. Our discussion of how cultural exchange between English speakers and Spanish speaking minorities in America has facilitated a decline in the usage of the formal “you” in Spanish is a prime example. As anthropologists have demonstrated, the ideas that we have about language matter. These ideas are also complex in that they change over time.

Recent debates about bilingual education including whether and how to teach children second languages alongside English are affected by language ideologies. From an anthropological perspective, dual language education not only provides children with economic benefit and cognitive advantage, but also ensures that non-dominant languages and cultures are represented, understood, and preserved.

Ellie is the former blog editor and assistant program coordinator at the Emory Center for Mind, Brain, and Culture. She holds a Bachelor's degree in Psychology and Comparative Literature from Emory and a Master's degree in Sociocultural Anthropology from UCLA. Ellie has also served as a a teacher through the Fulbright program in Turkey. Prior to her work at the CMBC, Ellie worked as a clinical research coordinator at the Emory University School of Medicine.
View all posts by Elika Pourbohloul →
This entry was posted in Uncategorized. Bookmark the permalink.