Laughter: An Example of Human Complexity 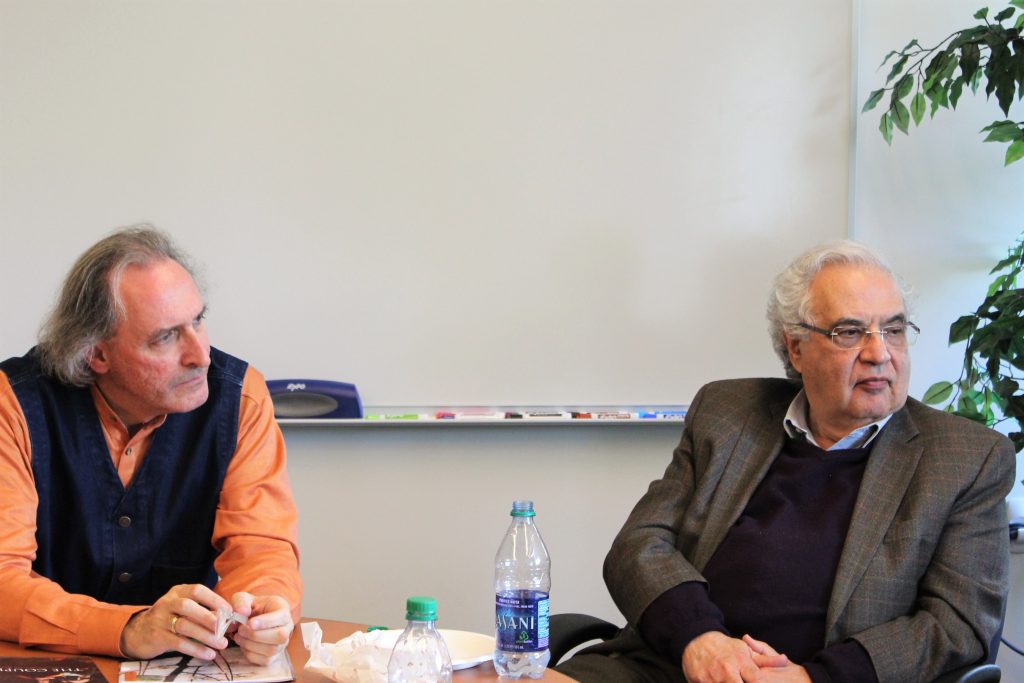 Eric Smadja opened his talk on laughter with a joke. As the discussion participants laughed together, Dr. Smadja gestured towards one of them and asked: “You are laughing— but why, and how?” Laugher is an aspect of human behavior that Dr. Smadja has studied in his career as a psychoanalyst, anthropologist, and psychiatrist. During a CMBC lunch discussion on April 6, 2017, Dr. Smadja discussed this complex and fascinating question with lunch participants from a variety of academic perspectives.

According to Dr. Smadja, all human behavior, including laughter, must be analyzed from a variety of perspectives, including anthropology, medicine, psychology, history, and sociology. This is because laughter includes both psychological and social factors.

Humans are genetically primed for laughter, which can express complex and variable emotions including joy, surprise, disgust, sadness, anger, and surprise. On the physical level, laughter has motor functions expressed by smiling and vocalization, and provides benefits such as muscle relaxation and the release of endorphins (“feel-good” chemicals) in the brain.

Laughter is an interaction between individuals and depends on collective interpersonal agreement on acceptable topics of humor. This cultural and social dimension is important because it reassures group members that they can identify with the humor expressed, removing guilt, shame, and other inhibitory mechanisms. Laughter also serves to maintain homeostasis within society and is prescribed in institutional settings such as cinema, theatre, and public ceremonies. Although there is some cultural variability, there are also rules and prohibitions on laughter in situations relating to trauma, illness, and death.

Laughter creates mental representations in the human brain, which may evoke repressed subjects. This is especially evident with dark humor, which portrays obscenity and deviance. An established political authority can become the subject of transformation through laughter using techniques such as hyperbole, metaphor, metonymy, satire, and parody. Dr. Smadja and lunch participants discussed whether laughter can be truly subversive in light of its function to integrate social norms. Laughter encourages ritualized role reversal in settings such as Carnival in which a clown portrays the role of a king. It is paradoxical because it is simultaneously transgressive and supportive of the social order. Dr. Robert Paul suggested laughter is a form of socially permitted transgression.

In today’s world, how much freedom do individuals have to transgress social norms through laughter? Dr. Shlomit Finkelstein posited that there are fewer risks to subversive humor than in past societies and less need for social sanctions. Dr. Smadja agreed, but suggested that although our current society offers us greater freedom, it is also more fragile.  He cited French sociologist Emile Durkheim’s work on the increase of suicide in modernity as a primary example.

I think it is also important to consider the current role of democratic institutions in providing free and open avenues of expression, which certain countries enjoy more than others. Speaking about laughter and its various forms opens the door to speaking about a host of related cultural performances, such as burlesque, theatre, parades, and other kinds of socially prescribed rituals. Cultural anthropologists such as Victor Turner describe these unique performances as events that collapse conventional binaries such as human/animal, man/woman, and adult/child, breaking with everyday life and routine and providing an opportunity to disrupt the normative social order. The ability of laughter and comedy to open doors to new kinds of social formations is a continual process of exchange between individuals and the societies they inhabit.

Ellie is the former blog editor and assistant program coordinator at the Emory Center for Mind, Brain, and Culture. She holds a Bachelor's degree in Psychology and Comparative Literature from Emory and a Master's degree in Sociocultural Anthropology from UCLA. Ellie has also served as a a teacher through the Fulbright program in Turkey. Prior to her work at the CMBC, Ellie worked as a clinical research coordinator at the Emory University School of Medicine.
View all posts by Elika Pourbohloul →
This entry was posted in Uncategorized. Bookmark the permalink.