“Mother to Son” by Langston Hughes 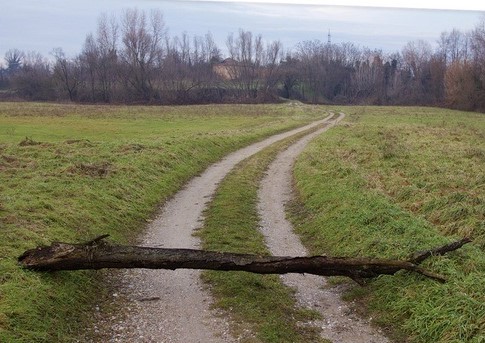 Well son, I’ll tell you
My life hasn’t been an easy bridge
But one weakly strewn from rope and wood
No iron foundations to be found
Held together precariously
Constantly buckling and writhing
Making me lose my grip
As I walk,
Planks fall off the bridge
The ropes stretch under my weight
Moving across takes time
But I keep faith in the bridge
Pray to it every day and believe in it
The rope will either break or it will not
All I can do it to keep walking
I tread carefully
Doing whatever I must,
To stay on the bridge
This ain’t no golden gate bridge
But only one I got

My son, I’ll tell you
Life is like a sport
Like Basketball,
You don’t start with anything
No points,
No rebounds,
No assists
No wins
But you need to earn them
No one will score for you
Or run for you
Or alleviate your burning lungs
I’ve missed shots
I’ve slipped
I’ve fallen
I’ve lost
But you got to keep trying
Keep running
Keeping taking those shots
No else will take them for you

Success, my son
Isn’t a paved highway
With a clear path
It’s more of a winding dirt path
Along the way
There will be a fallen oak
Rocks that bust your toes
Dirt in your socks
With my thighs burning
I braved through the terrain
Kept my head on straight
Learned to jump over the fallen tree
Learned to ignore the sting of the rocks
I made my own road
Converted the dirt
To a paved highway
I took the obstacles of my road
And learned how to make success
Your journey will never start as the highway
You got to run the through the dirt first

For my Final Project I decided to build upon the drafting as translation assignment we did earlier in the year. In that assignment, we had to write an essay regarding different drafts of the same poem. It was all about looking at the changes between the drafts and deciphering why the author made those changes. For the final project, I wanted to do my own translation of drafts. Instead of changing the medium, I wanted to work within poetry. I decided to take a poem that I had selected for analysis earlier in the semester, and make my own new drafts of the poem. My selected poem was “Mother to Son”, which was written in 1922 by the prominent African American Poet, Langston Hughes. This poem is from the perspective of a mother who uses the metaphor of stairs to describe her life to her son. I decided to make this poem my perpetual first draft and develop the poem through a set of three more drafts. The goal was to see how I could make the new drafts fit different molds but still implement many of the aspects from the original. This brought the question, “To what extent is it translation?” What I mean is that to what extent is a change too much? Can a draft still be considered translation if it retains absolutely nothing from the previous one? These are the questions I explored regarding translation as I did my drafts.

I found the Mother’s use of a metaphor to be very successful in conveying her hardships to her son. This use of a metaphor throughout the whole pome is what drew me to select it. The mother says that she has many obstacles that stand in her way but she always continues to climb. She goes from describing how tough her climb is and then transitions into how you got to keep climbing. What I wanted to do was create a new version of the poem that also used a metaphor in the same way however I wanted a different metaphor. According to Octavio Paz in his book, Translation: Literature and Letters, the process of translation, “…consists of producing analogous effects with different implements.” (Paz, 160) What he’s saying is that translation has several variances but maintains key components. Subsequently, I decided to write my first draft using the metaphor of a bridge. Like stairs, the bridge is a way to get from one place to another. I maintained many aspects from the original such as I kept it to the same number of lines (20), it was parent to son, and it used a metaphor. My first draft was a parent describing their journey in life through the metaphor of a weak, rope bridge. The main idea is that life isn’t an easy bridge but rather a difficult one to cross. The meager rope bridge is a common image usually seen in movies. It’s always over a treacherous fall and the characters usually have difficulties crossing, if they even are so lucky not to fall off. The rope bridge metaphor allowed me give a very similar message as the original poem. The bridge, like life, is precariously positioned and writhes with uncertainty. After writing the draft, I do believe that the metaphor fit well but there was an issue. That issue was that the rope bridge, in my opinion, didn’t provide enough concrete obstacles for my liking.  In the original, the stairs provided many obstacles such as no carpet, tacks, splinters, and boards torn up. These were all powerful and I felt as if the rope bridge didn’t have those powerful obstacles. I found myself writing about how it was unstable and planks would fall from under you. To me, this wasn’t successful translation because I wasn’t maintaining the idea of opposition. With the stairs, there was a heavy vertical and obstacle-based opposition to the mother’s success and I didn’t feel that with the rope bridge.

Going into my next draft, I was content with how I had progressed so far. I had been able to maintain the general idea of the original poem in my first draft and successfully implemented a different metaphor. This was a good start but I wanted to find a new metaphor that could fit better. I changed the metaphor from the bridge to a basketball game, a complete switch. I’ve participated in athletics throughout my whole life so I chose the basketball metaphor because I felt like I could relate to it. I’ve played basketball for a while and I remember that nothing was ever gifted to me. I never had a guaranteed spot on the team and every game I had to work hard to get points, rebounds, and assists. I felt like the idea of a basketball game was a very different metaphor than stairs but delivered a similar message. Since the bridge metaphor didn’t pan out exactly how I wanted, I decided to try something completely different. The draft also was from a parent’s perspective to a son and the basketball game allowed me to write about how everything has to be earned. I wrote that the other team is constantly trying to block your progress but you must keep playing. My favorite part about this metaphor is that it gave me good lines to use. In the original poem, Hughes is able to use phrases such as  “keep climbing” which fit well with the idea of stairs. Similarly, basketball allowed me to use lines such as “no one will take the shots for you.” This showed me that selection metaphors can sometimes effect what literary strategies you can use. Metaphors such as sports allow much more literary wit than that of bridge. However, as much as I liked the new metaphor, it didn’t have the effect I desired. The perpetual opposition in this new draft was the other team, meaning other players trying to limit your progress. For me, this made the opposition human when in fact, Hughes’ poem focused more around life being the difficulty. With my first draft, I was able to make the situation the opposition instead of other people. I felt like I wanted to revert back to my first draft where it was the person versus their environment.

For my final draft, I decide to use the metaphor of a dirt path. Stairs are a means of transport and getting from one point to another. A path is similar and I felt that it paralleled the initial metaphor well. The basis of this draft was that life isn’t a paved highway but rather a dirt path full of obstacles and pains. But through those obstacles, you learn how to maneuver them and create a “paved highway” for yourself. I felt that this maintained the integrity of the initial poem as I kept it at twenty lines, I used the total metaphor, and I was able to give a positive message at the end. I used a completely different metaphor and I changed the focus of the poem slightly. In the initial poem, the moral at the end was more implied than directly said. The mother says that she always keeps climbing but that’s about it. In my first two drafts I had maybe one line or so with a message. In this last draft, I dedicated several lines to explain how the lesson is learned. Instead of saying that I kept walking along the path, I described how I learned to jump over the fallen trees and ignore the pain of the rocks. I tried to make the draft a fifty-fifty split between the hardships and the learning process. I feel like an important part of literature in general is being able to have a positive impact on the reader or at least try to teach lessons.  I believe that Langston Hughes, when writing this poem, was more focused on the struggle itself. I wanted to take his idea of the metaphor, which describes the struggle, but also make a more powerful message. Going back to the Paz quote, I was able to produce “analogous effects” by maintaining the description of struggle through a metaphor of a non-living thing. I was also able to use “different implements” through changing what metaphor I used, which had a subsequent effect on how struggle was described. I found that the life struggle found in the original poem wasn’t reflected as much as I wanted in my first two drafts. I don’t think my final draft was perfect but I believe that I captured the idea of everything being against you and I feel like I switched the meaning of the poem.