“Sing About Me, I’m Dying of Thirst” by Kendrick Lamar 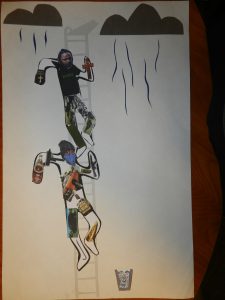 Poetry is a significant way to express emotion, but poetry is not limited to traditional means such as Shakespeare’s sonnets or Whitman’s free verse styles. This extends also to music, and when these lyrics are a focus of the artist, excellent work can also be found within it. For my piece to translate, I chose a specific section – the “Dying of Thirst Portion – of Kendrick Lamar’s song “Sing About Me, I’m Dying of Thirst”. This stood out to me because I am more interested in the poetic aspects of music than traditional poetry, and the album which contains this song is what helped me listen more closely in music for substantive lyrics; I thought the section I chose to use was most relevant because I felt it felt more poetic than other songs I explored. For the translation, I decided to create a collage-inspired image and focus on the thematic aspect of the work and the narrative it was painting. I found this to be the most important aspect of the song, as the formal aspects serve as a vehicle for the thematic aspects to be conveyed. It is mostly intended to tell a narrative rather than display those formal aspects.

The song fits into an entire story told on the album “Good Kid, M.A.A.D City”, which is the story of K-Dot (Kendrick) falling into and attempting to climb out of the cycle or drugs, alcohol, and violence that has plagued the city he grew up in, Compton. Throughout the album, Kendrick uses skits of tape recordings and voicemails to tell the story as it progresses, and the music complements these skits by either filling in other details or diving into the internal struggles that Kendrick is experiencing throughout. “Sing About Me, I’m Dying of Thirst” is the second to last track which is telling this story, and thus has had the preceding tracks to lead to this buildup of internal strife. The “Dying of Thirst” part of the song follows a skit in which K-Dot’s friend is lamenting over the death of his brother, and sick of this cycle; this is the last line of the skit: “Fuck! I’m tired of this shit! I’m tired of fuckin’ runnin’, I’m tired of this shit! My brother, homie!” Ominous background vocals introduce this part of the song, adding to the dark tone set by prior events, and it’s paired with an upbeat bassline that sets up the accumulation and subsequent climax of K-Dot’s internal struggle. The only relevant formal/structural aspect of the song is the triplet of “dying of thirst” at the end of each verse. This aspect, just as the rest of the internal conflict described throughout the album, is representative of the desire to escape his current lifestyle and adopt a new one, the one he really wants. This cycle is broken as the conflict is resolved in the song; in the final verse, instead of a third “dying of thirst”, he adds “so hop in that water, and pray that it works”. This is the last utterance in the song, and is followed by a skit in which K-Dot and his friends – almost as a last-ditch effort – are enticed by an old woman to accept Jesus into their lives and finally leave behind the crime and mischief.

In my translation, I chose to focus on what I felt was the most important aspect to take away from the song without going into a full-depth analysis. This aspect was the struggle of escaping the life he had been leading throughout the album, and that last hope of diving into holy water of the Lord; willing to do anything to get out of the deadly cycle, no matter how little of a chance he had. The collage-style images were my best shot at displaying these many different facets of K-Dot’s troubles in a simple image, because with this I could deliberately choose images and words within the bodies and objects that accurately depicted those facets. For example, to me, the focal point of the image is not Kendrick, it is the person chasing after him. He represents everything Kendrick is trying to escape and is the cause of all of Kendrick’s conflict to this point; each image was chosen to represent a specific characteristic of the struggle. Gang activity, burglary, marijuana, alcohol, and drive-by shootings are all explicitly chosen to be depicted in the person’s image. Other than the bible and cross, Kendrick’s images are less carefully chosen and I only chose the others because they were relevant to him and his future successes. The diving board was chosen to represent the leap of faith he was making, as it is a long shot that he will make it into the small bucket of water, but he goes for it because of everything the (holy) water represents, noted by the words contained in the bucket. Other tracks that were considered when creating this image and would be useful for further context are “The Art of Peer Pressure”, “Swimming Pools (Drank)”, and “Real”. Now some shortcomings of the style of translation I chose. Motion would have been very effective in adding to the feeling of trying to escape and being held back (perhaps an animated version of my abstract art translation plus the themes addressed in this one). Also, due to my artistic ability and struggle of portraying depth in a two-dimensional piece, three dimensions or better detail in the diving board/bucket combination would have provided a better depiction of my vision for this piece. In a similar sense to the animation idea, a digital storytelling/music video would have been able to properly describe the entirety of the story described in the song. Overall though, I am very pleased with this translation and I feel it accurately reflects what I wanted to achieve.