“Now, here, you see, it takes all the running you can do, to keep in the same place.”

– Lewis Carroll, Through the Looking-Glass

In this quote from Through the Looking-Glass by Lewis Carroll, The Red Queen gives Alice this explanation for the peculiarities of the land she has just entered. Scientists have used this interpretation, where Alice must “run” in order to stay alive, in order to represent certain scenarios found in nature. In the wild, situations occur where the fates of two species are intertwined. The Red Queen Hypothesis is an instance of coevolution, when two species evolve over time in response to one another.

It is a common misconception that life evolves randomly or by chance. While it is true that randomness is a factor, evolution is also impacted by non-random events. In a situation where the fates of predator and prey are closely linked, the two species become engaged in a deadly arms race, and this is one of the factors that can impact evolution. Prey are constantly evolving novel mechanisms to avoid their predators. In response to this, predators will need to evolve their own mechanisms to identify prey. Many times, this cycle repeats itself, causing both predator and prey to evolve together.

Red Queen and Fruit Flies. A good model of the Red Queen Hypothesis can be seen in the way the fruit fly Drosophila melanogaster evolves when it is infected by a parasite. Recently, researchers found that a phenomenon occurred in the first generation of infected flies where the parents’ genes became shuffled in their offspring: a process known as recombination. Genetic changes like this make it more likely that the mother’s offspring will not be recognizable by the same type of pathogen that attacked her. 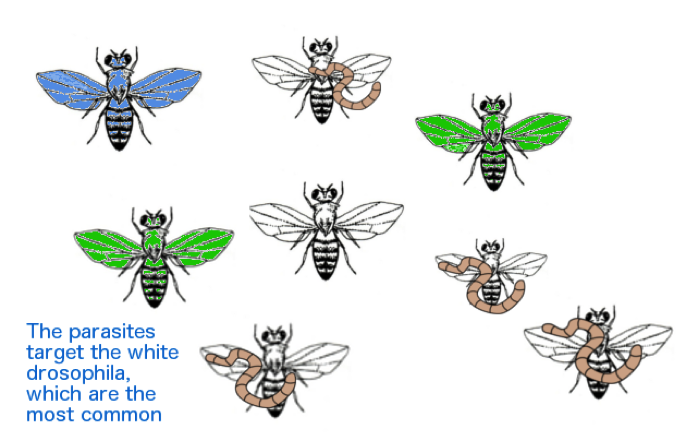 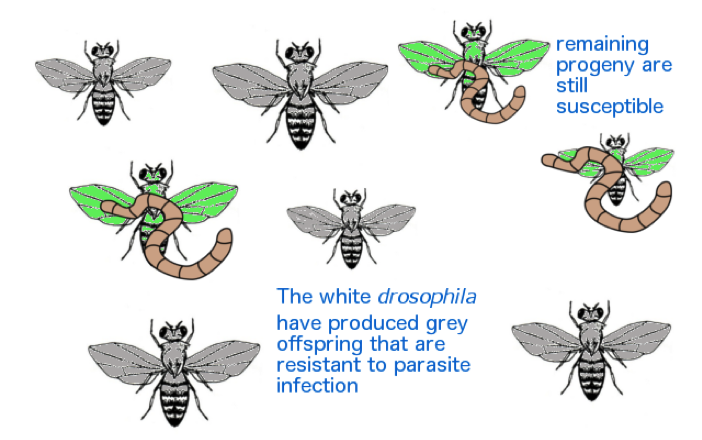 The relationship between Drosophila and parasites is a classic example of the Red Queen Hypothesis, where two species evolve together in order to reach some sort of balance. In this case, the host is trying to outpace the parasite by altering the genes of its offspring so that the parasite can’t detect it. Soon enough, the parasite in turn develops new mechanisms to detect the novel prey. These species are engaged in a constant arms race that will never find a perfect balance, and just like Alice in Through the Looking-Glass, must keep running in order to stay alive.

For more information, check out these papers:

Shinn, C., Blanchet, S., Loot, G., Lek, S., and G. Grenouillet. 2015. Phenotypic variation as an indicator of pesticide stress in gudgeon: Accounting for confounding factors in the wild. Science of the Total Environment. 538: 733-742