Have you ever wondered where modern humans originated?

Well, if you have, you’re not alone. Many scholars in the past, and even the present, have asked the same question and debated many hypotheses. The universally accepted theory credits Africa, specifically East Africa, as being the recent single origin of anatomically modern humans. Charles Darwin, who is arguably the most essential figure in evolutionary biology, first hypothesized that humans descended from apes, and he believed those apes were African, leading him to assume that our ancestors lived on the African continent. Almost half a decade later, his assumption was supported when anthropologists began to find fossils as evidence. This theory is supported by numerous genetic studies and fossil evidence found in Africa that show archaic Homo sapiens evolved to anatomically modern humans between 200,000 and 600,000 years ago.

As interesting as that theory is, I’m sure you’re wondering how modern day humans are so diverse if we all originated from a common ancestor. There are a few factors that contribute to the diversification of humans. For example, the founder effect, which is when a decrease in genetic variation occurs after a few individuals leave a larger population to create their own colony, played a major role. In the case of humans migrating out of Africa, there was a serial founder effect that occurred causing genetic differentiation to increase with geographic distance. Africa is known to have the highest degree of genetic diversity followed by the Indian subcontinent. This supports the Out of Africa theory, because the initial migration from Africa was to India. In addition to the founder effect, natural selection also played a major role in the diversification of humans as they spread from Africa. Natural selection refers to the progressive process where biological traits become more or less common based on the effect that they have on reproductive success. The environment in which an organism lives plays a major role in what traits will increase or decrease reproductive fitness. As humans migrated out of Africa, their genomes interacted with their environment to cause variation in specific traits that would help the individuals to survive and reproduce more. This is a large contributing factor to the genetic variation seen in modern day humans; as humans migrated out of Africa, different genomic features, which arose through random mutations, allowed them survive in their new environments, causing them to be different, genetically and phenotypically. Lastly, genetic drift, or random changes in the frequency of alleles, played a major role, as well. Similar to natural selection, these random changes that occurred caused genetic variation, but unlike natural selection, this process is not controlled and is completely random.

Check out the map below showing the suggested paths humans used to migrate out of Africa and approximate years before today! 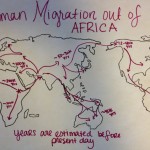 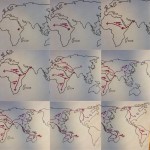 A common misconception is that humans are done evolving, but this is far from the truth.  In an article by Jay T. Stock in Science and Society, he asks whether the technological advances and unique biological characteristics that help us adapt to environmental stress are stopping genetic evolution. He acknowledges the fact that it is difficult to clearly see the continuous evolution of humans because we are a long-lived, slow-reproducing species with long (20+ yrs) generation times, but he still provides a strong argument supporting the continuous evolution of humans. One example that he provides for more recent evolution in humans is the strong selection that occurs on the gene that controls lactase production. The gene that allows humans to digest lactose used to shut down after humans were weaned off of their mother’s breast milk, but as the domestication of cows, sheep, and goats became more prominent, the ability to drink milk became nutritionally advantageous and those with the genetic mutation allowing them to digest lactose as adults were better able to pass on their genes.  Cool, huh? For more on this, check out the post on the evolution of lactase.

If you’re interested in reading more, feel free to check out a few of the articles listed below! 🙂