Misconception: It is commonly perceived that cancer is hereditary, and one can either not have cancer in their family, thinking they are fine or have family members diagnosed and think it is a matter of time before they contract the disease.

Truth: Both of these notions grossly overlook the fact that most cancers are sporadic, meaning their onset is not due to family history, but rather due to gen 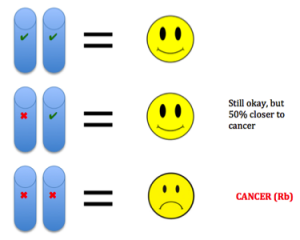 etic mutations and environmental exposures during one’s lifetime. Cancer is not heritable, but a predisposition to the disease can be (Peltomaki, 2012). For example, in our DNA we have two copies of each tumor suppressor gene, one from each parent. These genes keep cells from growing uncontrollably. So to lose function, one has to have mutations in both copies. Unfortunately, one can be born with a mutation in one copy, such as in Retinoblastoma (Rb). This means the gene is still expressed using the normal copy, but this confers a 50% increased predisposition for the disease bringing cells halfway closer to being cancer cells (Price et al., 2014).

Misconception: It takes one bad mutation in one cell to get cancer, and cancer is one disease with all of cells in a tumor being equal.

Truth: Population biology is used to describe tumor growth and spread (metastasis), rather than arising from a single “bad” cell. Actually, it takes on average six to seven cumulative mutations (less in pediatric cancers) to confer disease, each one having been selected for during the previous cell generation. When mutations happen and build upon each other, the combination of changes can lead to cancer. (Yamamoto, Nakamura, & Haeno, 2015). Illustrated below. This supports cancer mostly being a disease of old age, as mutations take time to accumulate. Cancer essentially consists of many diseases that continue to harass the brains of researchers. Essentially, doctors have been able to treat for certain mutations, but once one important mutation is treated, another one can take over to drive relapse (Landau et al., 2015). Also, in tumors there ar

e different environments around cells fostering different mutations in various areas of the same tumor (Hardiman et al., 2015). Cancer is adapting to therapies that target mutations, making it so difficult to control.

Misconception: DNA damage is rare, and we have little protection against it. Most cancer-causing agents (carcinogens) are processed chemicals not naturally found in nature.

Truth: DNA damage happens many times per day and our bodies have also evolved repair mechanisms in response to the need to correct such damage. In addition, the vast majority of cancer causin 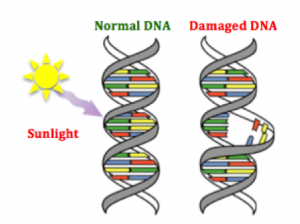