The Puck Project: A Shakespeare Performance and Ethics Program for Kids 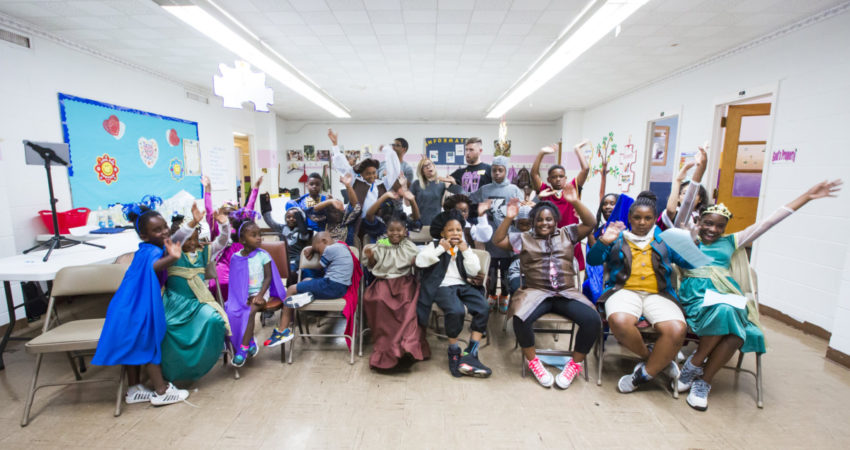 A couple summers ago, I joined with two other PhD students in developing a performance-based learning program for kids named The Puck Project. The idea came to us when, as luck would have it, we were having dinner with Sammie Byron. Sammie was visiting Emory as the keynote speaker for a screening of Shakespeare Behind Bars, the documentary about a Shakespeare program in the prison system of La Grange, Kentucky and where Sammie was incarcerated during the filming of the documentary. (He played Triculo in that year’s production of The Tempest, and if you haven’t seen the documentary before, I recommend putting this read on pause and getting your hands on it ASAP.) Since that dinner, we have met with and trained under Curt Tofland, the founder of Shakespeare Behind Bars as well as with the founders of Feast of Crispian, an organization that uses many of the same strategies but with U.S. veterans.

In these connections, we saw the opportunity for interdisciplinary scholarship with an eye towards public engagement and artistic expression. For three PhD students in English, it also provided quite the challenge in experimenting with what it means to do academic work more broadly. Within a few short months, we had designed the program, secured funding through Emory’s Jones Program in Ethics, and developed a partnership with Nicholas House, a truly wonderful non-profit in metro Atlanta serving homeless families in and around the city. Our first iteration of the program was cast across a summer camp Nicholas House hosts each year called Camp Nicholas. We met with the campers twice a day for about a month, one hour in the morning and one in the afternoon. Our purpose can be distilled into a three-part goal: first, taking seriously the ethical toolkit one acquires when embarking upon a journey of performance, actors are then invited to practice empathetic imagination, which translates into emotional intelligence. In this, we wanted to be participants alongside the campers, inviting them to test and experiment through performance rather than to offer any type of instruction, formal or otherwise. Since then, we did a shortened, “bootcamp” version of the program the following summer (2019). In both cases we learned quite a lot about public scholarship and the importance of expanding one’s sense of community as academics.

Shakespeare accesses different kinds of literacy (Embodied, Emotional, Visual, and Verbal) through acts of Translation, Adaptation, Mediation, Pantomime, and Performance. These links became guiding principles for the design and implementation—we wondered: how can we encourage and support play in/on/through these bridges?

[Shakespeare’s language] is more varied in its syntax, full of more colorful, expressive and metaphorical language than everyday modern speech, frequently employs rhetorical structures which we are more familiar with from sermons or political speeches than in having conversation, and most pervasively and apparently it’s poetry; rhythmic, sometimes rhymed, highly structured thoughts. ​

The Feast of Crispian ​

For example, iambic pentameter, is the type of metric line Shakespeare wrote in, and as Kristin Linklater famously noted years ago, the rhythm of the iamb echoes a single heartbeat and we average ten syllables in a single breath when speaking. The meter is already embodied in this way: Not just speaking words, you are talking whole body as you speak, and transferring the contents of your own body to the body of the audience.

To achieve our goals associated with empathetic imagination and emotional intelligence, we drew from the field of Bioethics.

“The academic discipline of performance studies offers a paradigm not only for teaching doctors how to ‘act’ in a more truly empathetic and compassionate manner but also for analyzing, and thus evaluating and improving, human interactions in the medical environment.”​

Gretchen Case and Daniel Brauner, “The Doctor as Performer: A Proposal for Change Based on a Performance Studies Paradigm,” Academic Medicine 85.1 (2010)​

These bioethics objectives—comfortably housed under a rubric of performance–helped us to imagine a program where children were enabled to search and try out behaviors on their own terms:

The theatrical component provided campers with a space of relative safety, where intense emotions and playful response would be applauded rather than disciplined. It’s also a space which inherently demands a sense of community. We followed in the experimental theory and praxis of Dwight Conquergood, who has argued that, “in everyday communication, people reconstitute culture as they articulate or imply the premises upon which they predicate, and the value by which they assess, their own social performances as well as those of their co-actors.” After performing scenes, the campers would reflect on how they felt, what they would’ve done differently or the same in their real lives, and where those same actions and feelings might be found outside the performance-based community we developed with them.

I feel really great.  I get to perform on my own with my friend. It’s a lot of fun. Sometimes I’m sensitive… When I get on stage and people stare at me, I get shy.  I say calm down, don’t be afraid. Do your thing and enjoy yourself.

Relying on and reflecting with each other, the campers would discover insights about themselves and others through modulated “rehearsals” of scenes from various Shakespeare plays. We saw the reflection elements–which occurred at every level, including the for ourselves–to be an experiment in auto-ethnography. On the one hand, the campers had the opportunity to revise and reproduce their own experience in various, multimodal and performative outlets and, on the other, the art practitioners facilitating the program reflected on their various roles in day-to-day activities. We had hoped this might cultivate the kind of coproduction in anthropological knowledge Emory’s own Dr. Debra Vidali has recently written about. After a month of training and a whole lot of play, the campers invited their friends and families to a final performance of an abridged version of A Midsummer Night’s Dream. The campers who were too young to read from the script performed as our “rude mechanicals,” utilizing their bodies and sound effects to pantomime and bring to life The Story of Pyramus and Thisbe, Midsummer’s play-within-a-play.

The program itself is ever-changing and designed to be transportable for different communities. Due to the circumstances of 2020, we have not been able to do the program this year, but we are looking forward to the future of the project in 2021!

What is at stake when documenting state violence and political resistance? How do aesthetics bear on political practice, and what role do different forms of media play?