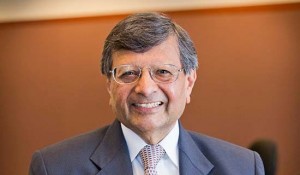 Jagdish Sheth is Charles H. Kellstadt Professor of Marketing at Goizueta Business School, and in his over 50 years of scholarship, he published hundreds of research papers and books, including the 1969 marketing classic The Theory of Buyer Behavior (with John A. Howard). Professor Sheth took time to speak with Business Librarian Saira Raza about his inspiring autobiography The Accidental Scholar, which is available to borrow at the Goizueta Business Library. This is Part 2 of the interview. Be sure to check out Part 1.

Goizueta Business Library: When you first came to Goizueta in 1991, you described it as up and coming. What would you say have been the key factors that have helped Goizueta mature into the institution it is today?

Jagdish Sheth: Because Goizueta was up and coming at that time and because it had a strong aspiration to be like the top 10 private universities, the school had the opportunity to experiment rather than remain status quo. Just like in a chemistry lab, experiments have failures. Sometimes you blow up the lab. But there have been about three positive experiments.

The first major experiment that worked was to put a leadership program around the 2-year students. So when the students come, you do a personality and psychological assessment like the Birkman. Then you help them go through a bonding mechanism – the team. It bonds the students much closer than any other mechanism. If you’re just attending classes, you bond with people more accidentally. You like somebody, and you get together as two buddies, and you bond. Here, the bonding is institutionalized. It’s an institutional intervention that creates the bond from the beginning. It creates a leadership phenomenon outside of the curriculum. And it’s very nice to find students from different cultures and countries learn to support each other quite a lot.

The second major experiment was going after working professionals as well as creating a shorter 1-year program, and most of them have worked pretty well. The 1-year program has been very successful. With the evening and executive programs, there was some skepticism that we could not attract working managers, but it has also been a very successful program.

The third one, which we are reinstituting at the school-wide level now, was the experiments we did in marketing. We did two key experiments – one was to do live consulting, which became the Goizueta Marketing Strategy Consultancy (GMSC). It began in 1993, and really ramped up to the level of excellence it’s known for today under the leadership of Reshma Shah. She put her energy behind it, and it’s in a league by itself. I think it’s become a role model across all five disciplines. The next experiment is to take this experiential learning platform to the other areas.

Another thing I’ve seen here is how well we have increased the size of the faculty. When I first arrived, this school was very small and boutique. We have added very strong faculty over the years. And we need to recognize and advertise this much more. It’s wonderful to see how the next generation of scholars have made this their home.

I also think the school has learned how to institutionalize itself. So instead of an “ad-hocracy” where we make decisions as we go, things are more streamlined. There is more predictability, transparency, and accountability. This is very important. This means also getting great professional staff. I think we are under-expressing our gratitude towards professional staff. Susan Klopper and the other business librarians, for example, comes from backgrounds that are different from the other academic librarians. We all know they are a great resource.

There’s one more thing that has happened. In most universities which are liberal arts oriented or engineering oriented, the business schools don’t gain acceptability or respectability. They’re perceived as a “money-maker,” but they don’t contribute to the discipline and the science. Business school faculty are not incentivized to go for research grants. Humanities does it. Social sciences does it. Physical sciences does it. We don’t have that kind of thing in place. Because of that, we don’t go applying to the government or the NSF for grants, or even to corporations. Because that’s the culture we have, the rest of the university doesn’t feel like you’re really scholarly. I think now I see that changing for the first time. When I meet my colleagues across the aisle, after their initial shock of learning that I’m a business professor, they say “Oh! He’s an interesting guy! He sounds very scholarly!” We don’t do enough internal marketing to gain that acceptance of business as a discipline within the college. The image is different from the reality. That is the next step.

GBL: You’ve pursued many philanthropic endeavors over the years. You met your wife at a literary club that you founded. There’s the Sheth Foundation, the Sheth Lecture Series, and the Sheth Fellowship. You do a lot! What inspires you to give back to the community in this way?

JS: When I reflect back and think, “Who made you?” I realize that a community invested in me, not just my family. An institution invested in me. A good mentor invested in me. And I feel like if I can do it there’s a lot of potential for others to do it too. So the giving back comes from really getting a sense of gratitude. You need to have that. To me, most passion and purpose comes from gratitude. Giving back is a natural thing for someone who has struggled to survive and has done well. Whether it’s a rag to riches story or as an academic, it doesn’t make any difference. In this country, rags to riches stories are more common among immigrants, although it’s not limited to them. I’ve gone through it.

There’s a second reason. I come from a faith that believes that the accumulation of material possessions is actually self-destructive. It will create more problems for you, then for the society. So given this value system, giving back is a good thing for your own self-interest. And that has stuck in my mind. As an early child, you socialize without literacy or cognitive reasoning. You simply accept what the family tells you and what the priest tells you. You accept it as a belief system and it stays with you until you refute it or until somebody questions you. So that has been another anchor. Giving back has become the norm. And it’s true for my wife also. She has given back to our faith community, The Jain Society. To us, it’s a natural thing.

We support the Emory University Emeritus College with the Sheth Lecture, and we’ve had many great speakers such as President Jimmy Carter and Atlanta Symphony Orchestra Conductor Robert Spano. My belief is that the sign of the strength of a good university is not just the loyalty of the students and alumni, but also the loyalty of the faculty and staff. I learned that from AT&T’s program called Pioneers, which engages retirees of the company. By creating these lectures, we wanted to motivate retired faculty and staff to come back to the campus. They are your best ambassadors. So that was the intent of the lectures for the Emeritus College.

We also have Sheth Lecture on Indian Studies as well as the International Award. International students do extraordinary things in their countries, but nobody knows on their campus. So I thought why not create this program where we recognize the most distinguished alumni. And then similarly, we have an award for a faculty member that has internationalized the curriculum. We’ve given these awards at University of Illinois, Emory, Kennesaw State, University of Pittsburgh, and I’m thinking about endowing this at other places as well.

GBL: Favorite business book and why?

JS: There are two or three, I’m struggling! I would say Peter Drucker’s Practice of Management. Drucker is a unique individual who knew how to see the picture, synthesize it, and write it so everybody can understand. I think he’s the only thought leader that has been able to see the future most accurately. My back-up favorite would be a book called Megatrends, by John Nesbitt. He was a CIA spy, and had a lot of great insights on society. Not a business book, but very good.

GBL: What are three words that come to mind when you think of the business library?

JS: Treasure – a great library is the sign of a great institution.

It’s a place for meditation and contemplation. It just calms you down. I don’t know what happens. Maybe the books or the physical environment or the other people. You suddenly become calmer.

One more word if I can – it’s a great place for exploring. That’s what I’ve found. No agenda. Just explore.