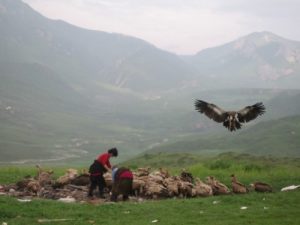 Sky burials (or celestial burials, as they are also called) are the burial rites of choice for the Tibetans. After a member of the community has died, the body is cut into pieces by a Burial Master, and then taken to a selected site, usually in an area of high elevation. This is because the corpse is then supposed to be eaten by vultures, who tend to congregate at higher altitudes. After the vultures have consumed the body, the belief is that they take the body away to heavens where the soul of the deceased person remains until they are ready for their next reincarnation. This practice is believed to have been practiced for as many as 11,000 years, but there is little written evidence, or physical evidence, due to the fact that the remains are ingested by the vultures or other animals.

For Tibetans, the sky burial serves both practical and spiritual functions. Often, the ground is frozen, making it difficult to dig graves, making sky burials an appealing alterative. Also, some of the central values in Tibetan culture revolve around being humble, generous, and honoring of nature; sky burials allow the physical bodies of Tibetans to be returned to the earth in a way that generously provides a meal for the vultures and very minimally disturbs the earth. Because of their belief in reincarnation, death is seen as more of a transition as opposed to an ending. They believe the soul moves on from the body at the very instant of death, leaving very little room for attachment to the physical body after death. In fact, in order for the soul of the person to have an easy transition into their next life, the Tibetans believe there should be no trace left of the physical body after death, providing another advantage of this practice.

This entry was posted in cadaver, ritual, Uncategorized. Bookmark the permalink.