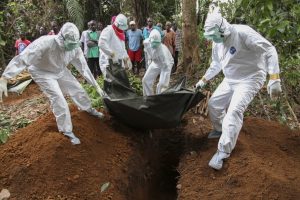 The 2014 Ebola Outbreak claimed about 11,000 lives and transcended country borders. Ebola presents with frightening symptoms: more frightening was that it kept spreading. Thanks to Anthropologists, health officials knew why: local burial practices endangered the lives of those partaking in burial rituals. We will look at how those practices influenced Ebola policies and procedures:

When the first responders to Ebola came to Guinea, Sierra Leone and Liberia, they were determined to stop Ebola’s transmission at any cost. The Ebola virus is transferred through infectious bodily fluids, so foreign health officials took over disposing of the dead and developed a procedure to handle mass casualties. The African locals did not respond well to this practice, often resisting health officials’ efforts to bury the dead.

Anthropologists realized that in isolating deceased Ebola victims, the health officials were dishonoring locals’ culture and beliefs. Anthropologists relayed these findings to policymakers, who formed coalitions with government officials, tribal and religious leaders in order to come up with burial techniques that would honor the dead and living while halting Ebola.  As a result, locals allowed their leaders and foreign officials to assist and Ebola transmission slowed. It was one of the first times that foreign health officials recognized that religious and cultural practices and political beliefs strongly influence health promotion techniques on an epidemic level. They adjusted their procedures accordingly.

It was important to recognize the cultural factors at play, but was recognition and adjustment too late? How many have to die before world aid organizations adjust their policies and procedures to accommodate many different cultures and societies? Although these organizations are powerful, they sometimes adopt a “savior” mentality, and forget that they can still learn. Another outbreak could happen: public safety is of great importance, but so is cultural relativism.

This entry was posted in cadaver, grief and mourning, mass death, ritual. Bookmark the permalink.