Right to die groups over the year have tried to portray death as a positive experience. They want to desensitize the general public to death, removing the negative connotations of assisted suicide. Dr. Philip Nitschke is looking to revolutionize the controversial topic of euthanasia with his death machine, the Sarco. 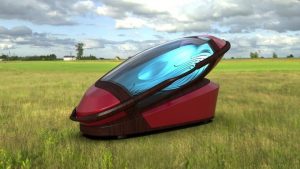 In 1997, Nitschke founded Exit International, a nonprofit that advocates for the legislation of euthanasia. This followed him administering the first legal, lethal, voluntary injection to a terminally ill patient in history. This occurred under the short-lived Australian Rights of Terminally Ill Act, but it shifted his perspective of self-inflicted suicide. Rather than being a concept reserved for the terminally ill, he believed that any rational adult should be allowed to experience a “good” death. Modern medicine can keep individuals alive for far longer than previously possible, leaving people in deteriorating states.

The majority of Exit Internationals members are the elderly, providing them with information on how to die with dignity. What Nitschke is currently striving for is to provide individuals with a death that is more than just “dignified.” He wants the passing into the afterlife to be a euphoric experience. Therefore, the Sarco was designed to have a spaceship-like aesthetic to make it seem as if an individual is “journeying to the great beyond.” This would remove the stigma that was often associated with the doctor’s prior machines. The previous inventions tended to reinforce the macabre stereotype of death, which served to put people off. Rather than dying strapped to a plastic bag, an individual can choose where and when to initiate the procedure.

The main draw behind the Sarco is that in concept it can be transported anywhere. No longer will people be restricted to hospitals to administer the euthanasia, they will have the opportunity to take into account the critical factor of where you die. The process is also painless and provides one of the most soothing feelings before death. The machine euthanizes individuals through hypoxia, where the oxygen level is lowered to the point that a person can still breath easily to receive the intoxicating sensation. The user then subsequently looses consciousness and dies.

The process to utilize the machine is also very personal, limiting outside interventions. A user has to fill out a survey which declares if they are mentally fit to make the decision, and they then receive a 24-hour access code to use at any Sarco machine in the world. When the code is entered at a device, the process commences. It’s an exciting concept, providing individuals with a possible alternative that could make their experience more personal and unique. In the end, it allows individuals the opportunity to achieve what they could consider being a “good” death on their own terms.

Posted in ritual, suicide, the process of death

Death of the Northern White Rhino

This week, the last male northern white rhino, Sudan, finally died from age-related complications along with a newly developed infection on the back of his right leg. To prevent the complete death of the species, Sudan had been kept under the protection of armed guards at the Ol Pejeta Conservancy in Kenya. Conservationists expected his death, but regardless, his passing still shocked the world.

Though most news outlets have reported that Sudan died at the age of 45, most chose to omit the fact that he was euthanized. Would it be that the news agencies are trying to steer the public perception of Sudan’s death away from the conceptual “bad” death? The problem with this is that according to Michael C. Kearl, Sudan died according to the predetermined scripture. By definition, his passing should be considered good as it was an “on time” and those closest to him had felt the warning of his death. This serves to bring up the idea that his putting down might have been left out of major news stories due to the negative stigma associated with human euthanasia. The putting down of animals is something that has garnered near universal support over the past couple of decades, even receiving approval from PETA (People for the Ethical Treatment of Animals). Though Sudan is not considered a human being, the status he had garnered before his death on social media and in the news granted him the title of essentially a celebrity. Therefore, due to the social stigma associated with assisted suicide and euthanasia for human beings, certain news outlets might have chosen to omit this information due to Sudan’s transcendence of status.

The dismay felt by the world is not solely directed at his death but the “death” of the northern white rhino species as a whole. The issue that arises with Sudan’s death is while it should serve as the species’ death warrant, the intervention of medical practices and technologies are complicating the process. Similar to an extent to the case of Terri Schiavo, developing technologies are making individuals question whether this truly means the end for the species. The Schindler’s experienced the same confusion when doctors provided information on unproven therapies and treatments that could restore brain function to their daughter. What the general public is currently dealing with is the initiative by scientists to attempt to take sex cells harvested from northern white rhinos and use them through the method of IVF (In Vitro Fertilization) to impregnate southern white rhino surrogates. Though the technology is experimental, it leaves the general public in a state of uncertainty similar to that of Terri Schiavo’s parents, unsure of whether to mourn the death of the species or not.

Posted in ritual, suicide, the process of death