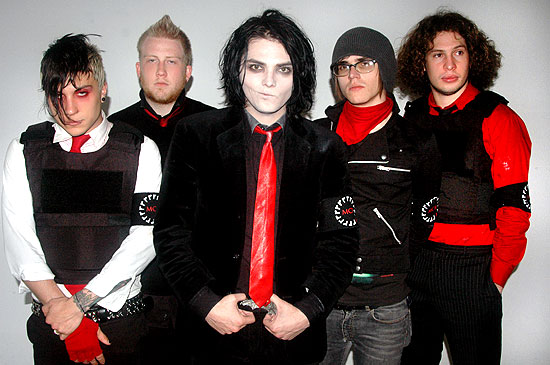 Today in discussion, our group talked about how the school shooting article addressed music choices as a predicting factor for aggression.  While I personally don’t believe that what people listen to indicate their actions, it makes me listen to the lyrics of songs more closely. We said that the mention of music was a weak part of the article, but it may have a valid point in some aspects. If listening to something for an extended period of time, people can become numb to the graphic images presented in some lyrics.

One of my favorite bands from middle school and high school, My Chemical Romance, features graphic lyrics in their songs. One that I really starting thinking about today after our class is called Teenagers; these are the lyrics:

“They’re gonna clean up your looks with all the lies in the books to make a citizen out of you. Because they sleep with a gun, and keep an eye on you, son, so they can watch all the things you do. Because the drugs never work, they gonna give you a smirk’, cause they got methods of keeping you clean. They gonna rip up your heads, your aspirations to shreds. Another cog in the murder machine. They say that teenagers scare the living **** out of me. They could care less as long as someone’ll bleed. So darken your clothes or strike a violent pose, maybe they’ll leave you alone, but not me. The boys and girls in the clique, the awful names that they stick, you’re never gonna fit in much, kid. But if you’re troubled and hurt, what you got under your shirt, we’ll make them pay for the things that they did.”

In these particular lines, there’s mention of drugs, bullying, and retaliation through aggression (with a gun possibly). Through listening through lines such as these, it could be possible that people see these images as less unimaginable and actually come to the point where they can visualize the scenes. In this way, they can come closer to actually committing crimes like school shootings; maybe the paper did have a point about music and aggression after all.

In our society, death is thought of as something that needs to be overcome.  If someone dies, others ask what they could have done to prevent it.  If someone commits suicide, they say “I should have helped before it was too late”, if someone dies in a car wreck: “I shouldn’t have let them go out that night”, if someone dies of lung cancer: “they shouldn’t have smoked so much” or “if only they had gotten a new lung in time”.  Because of all these wishes and beliefs towards death, it becomes difficult to see what constitutes as a “good” death in our current society.  One would think that with all the prevention techniques, or aspirations for cures, that a good death can no longer occur; all death is now considered bad.  This becomes a problem for the sick and dying, which can no longer aspire to die with dignity.

In seeing and hearing ads, I notice that this concept is everywhere.

As an organ donor, I was initially proud to make the decision to “donate life” to others after my own death.  I saw people who chose not to get the red heart on their license as unnecessarily greedy and as people who didn’t care about the needs of strangers.  But after talking about the position on organ transplants in other countries, I realized valid reasons to not donate.  Who are we to say who should get new, life-saving organs and who shouldn’t? Should young mother receive an organ before an old man? Should a smoker be refused lungs before a non-smoker? Who has the right to answer these questions in order to make life-changing choices? The organization Donate Life supports the donations of skin, eye, blood, and organs.  I commonly hear their commercials on the radio, with inspiring stories such as mothers who wouldn’t have had children without a new heart.  They encourage you to help this person who needs a new organ in order to live.  At which point are we helping someone at the sake of another?

Click here to explore a video about the need for organ donations.

Another common theme I see in ads all the time is the idea of working together in some way to discover cures to many types of cancers.  People walk to end breast cancer and donate money for all kinds of other terminal conditions.  Everyone wants to live in a world in which they don’t have to worry about their parents and grandparents getting Alzheimer’s.  But deaths caused by cancer are very common.  Without these, how will people die?

All of these hopeful preventions want to create a world in which there is no death caused by “bad” or “unfortunate” means.  But without them, how will we die? How do we want to die? Will we become like the elderly in The Giver and have programmed deaths before we become too old and lose our place in society? Although this is an interesting perspective and does provide for a “good death” in which every person gets a happy and proper send off, it is hard to imagine this being accepted in a culture that will not accept physician assisted suicide.

Many of our recent readings have dealt with the advancement of medicine and technology and how it has affected the length of life.  In America, we see this triumph over death as a great accomplishment and therefore strive to keep increasing the length of life.  However, are we raising quality of life as well, or just delaying the inevitable processes of nature? As we age and become more feeble and sickly, technology that preserves our lives becomes more increasingly present.  It is used to keep our heart pumping when the heart has stopped doing so on its own, to keep us breathing, and to replace body parts that can no longer perform correctly.  These actions can prolong life, but they also commonly leave patients in a state of non-life, non-death; comas, forms of social death after living longer than family and peers, and failed organ transplants.  For these reasons we can wonder not only how beneficial these actions are, but also when should we plan to stop technology advancements.  After a point, extended life is no longer a beneficial thing if all other important aspects of life are absent.

This argument is presented in the book/movie Tuck Everlasting. The Tucks have lived for over a hundred years after drinking from a stream that gave them eternal life.  Winnie Foster falls in love with one of the Tuck sons and eventually learns their secret of immortality; he tries to convince her to drink from the stream and wait for him so that they can share the rest of time together.  The father, Angus Tuck has a conversation with Winnie in which he tries to convince her otherwise (see video link).  It is here that the concept of longevity versus quality of life is incorporated into this fantasy film.  Angus establishes the idea that living forever is not such a great gift; they become a being in a world in which everything around them passes by throughout time.  They no longer have an importance as an individual since they exist outside the boundaries of normal functioning life.  He believes that Winnie, as a mortal, is able to live a true life of meaning and social connections with the world she lives in.  Taking  Tuck’s advice, Winnie decides not to drink from the spring and we see that she dies after a long and fulfilling life; the film shows us that if given the choice, opting for a natural life is more meaningful and rewarding than “living forever”.  Maybe this should be considered as we continue along our path of forever advancing science and technology.

Winnie Foster at the immortal spring