Can I please have a look at the coffin with the hot chick black reaper? 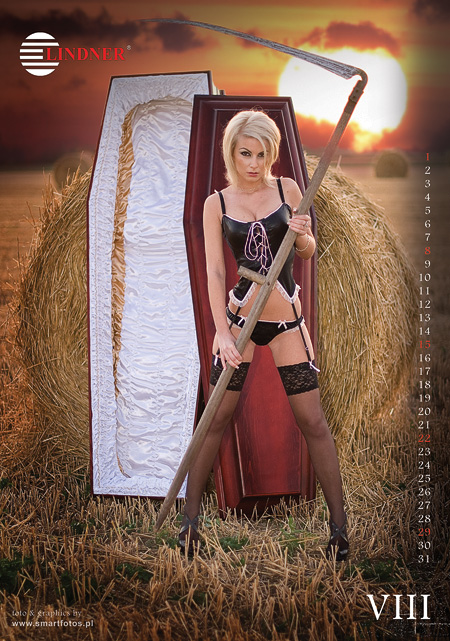 The good people at Polish coffin manufacturer Lidner do not hold back when it comes to marketing their products. After all, funerals are a business, and to make it in a cut-throat world, you may have to find your niche. Lidner decided to spice things up. With a calendar. But not any old calendar – one with semi-naked ladies posing with the coffins. This is quite a leap from the way the company presents itself and its products on their restrained website emphasizing tradition, craftmanship and quality. How would you feel about buying a coffin from a company that markets their products with a well endowed Oktoberfest girl straddling the product, a black lingerie + military hat wearing vixen breaking into the coffin with a sledge hammer to retrieve booze, or simply with a classic make out shot (but on a coffin)? Classy!

“We wanted to show that a coffin isn’t a religious symbol. Its a product” says Zbigniew Lindner, the firm’s owner in an interview published by the Daily Mail. That sex sells is not news for most of us, but it is very forward in the coffin business. And while Lidner’s choice of marketing has caused outrage in the Catholic Church, it may actually be good for business. 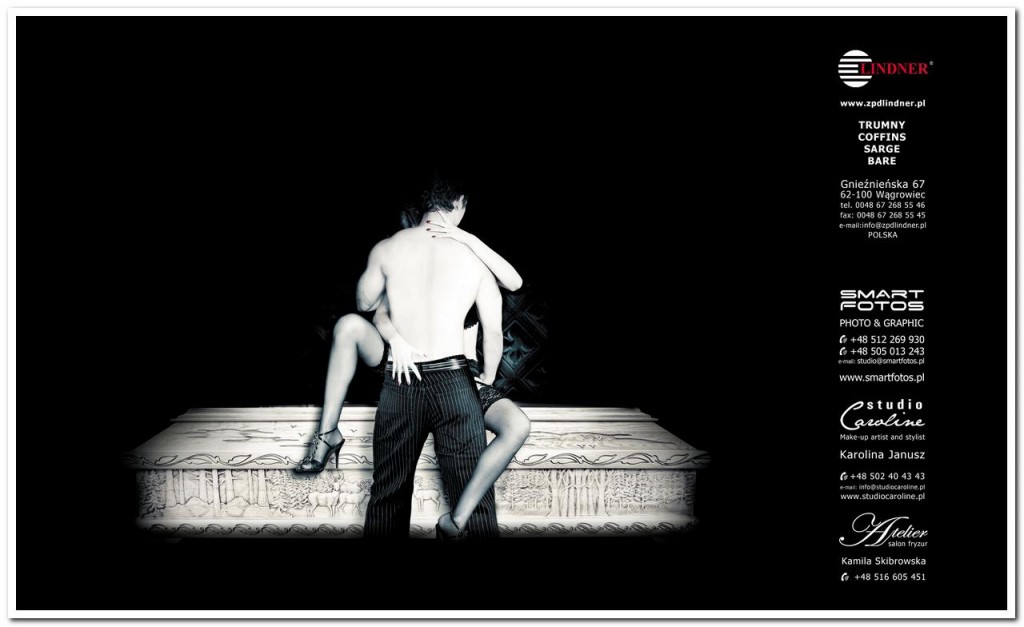 This is one of the most fascinating and tasteless products I have seen in years. Yet – and maybe because of it – it raises very interesting questions. We agree that while funerals are important rituals, they are also a business. Every step of the way the people who make a living burying our dead must make some kind of profit. So while we prefer not to think about that aspect of the service, we all know about it and agree to accept it. So why does this upset us? Feminist critique aside (and while I have plenty of it, I will hold my fire this time), is it worse to market a coffin with sex than it is to sell any other product that way?

We expect the business of dealing with our dead to be dignified, respectful…and definitively asexual. But if you want to market a product, sex may actually appeal to customers. The associations of death and sex are well documented in art and literature since at least the 17th century, and in folk tales that are even older (think Snow White). Marquis de Sade may be the most notorious of writers exploring this field, but as intentionally provocative as his writing was, his work found a readership in a cultural context that accepted the exploration of these connections we today find so repulsive. Our culture no longer dwells on intercourse with the dead, but sex and marketing may never have been more explicitly connected. In a sexualized capitalist society, can we really expect death to be protected from eroticized marketing strategies?

When one dies, the conservation of the integrity of the body is practiced in our culture.  Many times when a person dies, we still have an emotional attachment to the body because the body and identity of the person are intertwined.   Although the person has died, the body is still treated with respect through the conduction of certain rites and rituals at funerals.  The treatment of the dead body is related with mortuary practices.  The way cadavers are controlled, is the way the family copes with the death of their loved one. In other words, the way the cadaver is handled is the way we indirectly handle and define death.  Thus, funerals provide a sense of closure, and introduce the initial process of peaceful detachment. However, for a Muslim family in London, this was not the case.

On Friday April 18, 2003, a Muslim woman’s body was found in the hospital morgue covered with pieces of bacon, as it was being arranged for the viewing. In Islam, the consumption of pork is prohibited.  Thus, the act of having bacon put on the body is not only disrespectful to the body, but also to the religion, the family, and the Muslim community at large. One of the family members said, “ ‘I witnessed her passing away and then for me to witness that again, it’s traumatic. I feel emotionally raped.’ ”  The person who committed this crime was attacking the religious beliefs of the deceased, by performing this traumatizing act. As a Muslim myself, I was awfully disturbed and repulsed. Even if the person who died wasn’t Muslim, it is such a grotesque thing to do in general!  But because the family is Muslim, a deeper meaning is behind it.  Somebody symbolically put what is forbidden in Islam on the dead body as “a slap in the face”.   This incident reflects on how cadavers are located in a liminal phase, of being between a subject and an object.   The dead body is just an object, but is the main subject of this issue.  This hate crime just shows that people are capable of doing anything and everything they possibly can to make a point.

As mentioned earlier, funerals provide a sense of closure for the family members.  However, this upsetting act made it a lot worse for the family to cope with their grandmother’s death. As a result, there is a cash value prize to whoever comes forward on who may have committed this racial hate crime.  The article can be found in the link below: