Finally about the Walking Dead

The Walking Dead has been a hit TV show for the past four years. While I have watched it religiously, the theme of death in the show never stood out to me before. There have always been themes of staying alive and sticking together as a group, but the zombie as a character had never been discussed. The show is based around the main character, Rick Grimes; an ex-sheriff who wakes up as a patient in an abandoned hospital and quickly learns that he is in the middle of the zombie apocalypse. For three full seasons, Rick has lead his group into different battles and through a variety of adventures while simultaneously trying to avoid being bitten by a zombie. Although at least one zombie has been present in each episode, these undead characters and their hunger for human flesh have been a side-story to the drama and strife between “survivors.”

The episode that aired this past Sunday was the season premiere for Season 4. In one of the opening scenes, a bunch of the children from the group are standing by the chain-link fence that encloses the group’s camp. As they stand and giggle at the zombies struggling against the fence to get in, one girl starts to name the zombies and encourages the other children to remember the names. At the same time, Rick’s son, Carl, storms up to the group of children and yells at them for naming the zombies. He states that they can’t have names because they aren’t people anymore. They are dead. The young girl replies that they are still people because they walk and are hungry but they are just different types of people now. This is the FIRST time during the show that the zombies have been discussed in a non-violent and contemplative manner.

A bit later in the episode, a few individuals from the group decide to go on a grocery run at the nearest corner shop. While they are there, several zombies break in to the building and start attacking them. The cinematography during this scene is unlike any that has been used in the show before. Instead of filming different shots far enough to include the zombie and the “living” person it is attacking, the camera focuses on the zombie’s missing limbs as they move to illustrate their animated death. I believe that this focus on the animation of an incomplete and rotting corpse forces the viewer to re-evaluate what it means to be “living.”

The past three seasons, which have been marked by drama between the “survivors,”  has included infidelity, murder, racism and deception… But has always seemed a bit average. However, this new focus on the zombies as the “living dead” instead of soulless animals is sure to bring a new layer to the show that will make the fourth season new and inventive. 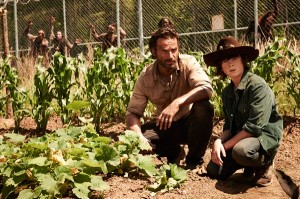 Posted on October 19, 2013 by Bridget Maureen Cashman in cadaver, Uncategorized

Tagged Bridget Cashman, the living dead, what is death