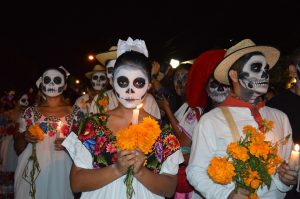 Dia de los Muertos, or Day of the Dead, is a tradition and holiday that originates in Mexico, but is celebrated across Latin America. On November 1st, individuals come together and partake in festivals and parades in order to both honor and celebrate loved ones that have passed. As seen in the picture above,  prominent symbols of this holiday are skulls and skeletal depictions, complemented by festive and lively dress, flowers, and light. Family and friends prepare the favorite foods of the deceased, which serves as an invitation for the dead to awake and join in the celebration of their lives. I have always found Dia de los Muertos to be a very respectable and insightful tradition, one that represents the perception of death more as an inevitable occurrence that should acknowledge the lives of the deceased in a positive, communal way. Its believed that the dead would be insulted by grief and mourning, and as such, the dead should rather be honored with a lively celebration that commemorates those that have passed.

When comparing Dia de los Muertos to Halloween, obviously very different in their origin and practice presently, death is represented in ways that starkly contrast the other. Halloween seems to follow the idea that death is scary and gruesome (imagine how skeletons and the dead are made to look), whereas during Dia de los Muertos, the dead are depicted more beautifully, often with colorful skulls and clothing. In my opinion, the latter depiction helps, especially with children, to better normalize the occurrence of death in a way that is not feared or avoided. In fact, during this holiday, death is seemingly transformed into a human experience that is natural and beautiful; a time where the dead can be remembered in a lively and festive manner, in which their lives are honored through food and activities that bring everyone together.

The holiday actually occurs over two days, on November 1st and 2nd, in which children and the elderly have respective days that they honored through different symbols and activities. Ultimately the holiday as a whole commemorates those that have passed, but continue to be loved and celebrated.