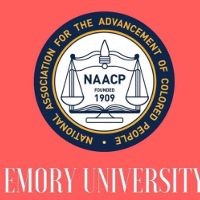 The Emory NAACP organized a trip to the Center for Civil and Human Rights on November 4th. From an all too realistic interactive exhibit of the Woolworth Lunch Counter Sit-Ins to alarmingly graphic photos at the Lorraine motel of the assassination of Martin Luther King, Jr., the Center for Civil and Human Rights Museum is nothing short of an intense experience. Upon arrival, there is a beautiful mural that depicts messages throughout the history of human rights. 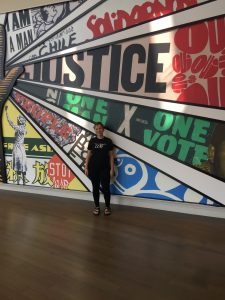 The museum is divided into multiple exhibits. The first floor is home to the Morehouse College Martin Luther King, Jr. Collection. The second floor is always an exhibit to the American Civil Rights Movement and also, the gift shop. The third floor is an ode to the Global Human Rights Movement. “The exact focus of these exhibits generally change every 4 to 6 months.” stated our opening tour guide.

This exhibit is a “no photography zone,” because of the original documents of MLK, Jr. but I still have a couple covertly snapped pictures of some of the women included.

This one is the most intense, popular, and thorough exhibit in the museum. The Civil Rights Movement gallery presents the brave fight for equality in The American Civil Rights Movement of the 1950s and 1960s. There are multiple interactive displays depicting the courageous struggles of individuals working to transform the United States from Jim Crow laws to equal rights for all. The most intense and visceral part of the museum is the interactive Woolworth’s Lunch Counter. Visitors put on noise cancelling headphones and sit in a red chair as a timer starts, “Let’s see how long you last” starts the recording. This daunting statement is followed by voices of racist, whites taunting and cursing at you while the chair is kicked and shaken from all angles. Time after time, people left the exhibit in tears. The museum’s exhibits, particularly this one, tell stories in ways that promote empathy and understanding.

The Human Rights Movement gallery enables visitors to make connections to the world of human rights. The gallery features interactive technology intended for all audiences to help visitors gain a deeper understanding of human rights and how they affect the lives of every person. With interactive stories of people who have been stripped of their human rights, this exhibit is extremely interactive and attracts international visitors year round.

Quite naturally, there was a large focus on states in the South. Whenever there was a button to press for “Louisiana” or “New Orleans,” y’all know I pressed it. Although I was proud to see New Orleans native Mahalia Jackson be featured largely in the women’s exhibit, every other time my home was mentioned I was jarred. I say jarred in a way that is not synonymous with shocked or surprised though, for I am no longer shocked by many things when it comes to the ongoing fight for civil rights in America. I say jarred in a way that evinces my unpleasant or disturbed reaction to Louisiana’s heavy involvement in pushing back against civil rights progress. The headquarters for the Ku Klux Klan was in Shreveport, Louisiana. People were beaten on Freedom Rides to New Orleans. While New Orleans, a cultural and social enclave, is pushing daily to right our wrongs, the state of Louisiana as a whole is decades behind. I hope that as more museums like this promote empathy in the hearts of people nationwide, maybe we will be closer to a more humane society.