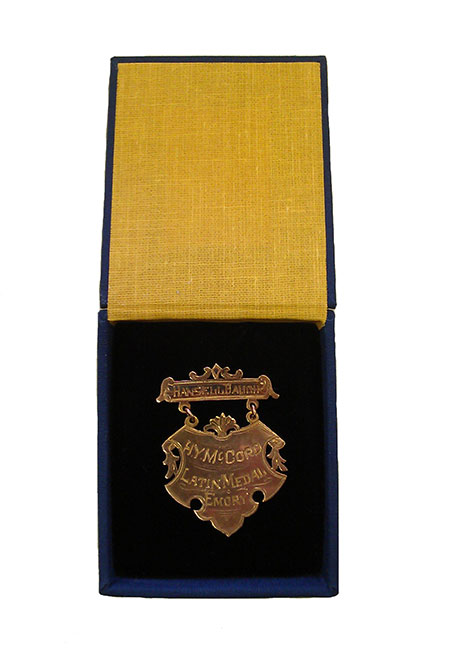 Part of the Memorabilia collection (Series 74) in the Emory University Archives, this McCord Latin Prize medal was given to Hansell Baugh in 1922 for achievement in the study of Latin. The McCord Latin Prize and the Reppard Greek Prize were given out to undergraduates for achievement in the study of Greek and Latin in the beginning half of the twentieth century. The tradition of giving out these two prizes was slowly forgotten until Professor Peter Bing of the Classics Department came to MARBL looking for information about the awards. There  he discovered the existence of this original McCord Prize medal in the University Archives. Alumnus James Passamano ’85C happened upon the medal and its tradition at Emory when Bing posted a picture of it on the Classics Department website.

Passamano, himself interested in ancient Greece and Rome, decided to revive the tradition of these two prizes and financially support the department in minting new ones. At an event on April 29, 2013, the first round of the new medals were given out to undergraduates for achievement in Latin and Greek. You can read more about the event and recipients here: http://news.emory.edu/stories/2013/05/er_classics_medals/campus.html