MARBL is pairing with Southern Spaces, a peer-reviewed, multimedia, open-access journal published in collaboration with the Robert W. Woodruff Library of Emory University, to publish short features on MARBL collections, events, and exhibits that tell the history of spaces and places in the US South. These posts investigate the geographical, historical, and cultural study of real and imagined southern spaces and are featured here and on the Southern Spaces Blog.

Imagine you are facing north from the main quadrangle of Emory University in Atlanta. Rising from the foreground of Emory’s gray-pink marble halls and terra cotta roofs, shimmering against a limpid Georgia sky, the glassy towers of the Centers for Disease Control and Prevention (CDC) hover into focus. Surrounded by fences and walls, the CDC campus appears impenetrable. Imposing security gates and high modern façades add a sense of permanence that belies the agency’s earliest beginnings in rural South Georgia. Assimilating diverse research agendas, the CDC has worked to eradicate innumerable diseases in the postwar period and its mandate has assumed an international scope. But the CDC’s broad mission and glimmering campus were preceded in the early twentieth century by a simple headquarters of wooden frame buildings and one highly localized disease endemic to the Lowland South: malaria.

Housed in Emory University’s Manuscript, Archives, and Rare Book Library, the papers of epidemiologist, educator, and early CDC administrator Melvin Harris Goodwin (1917–2004) narrate the movement of malaria research from Georgia’s southern hinterlands to its capital in Atlanta—and the eventual consolidation of that research under the auspices of a sprawling federal agency devoted to disease control and eradication. 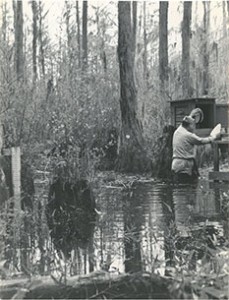 Melvin Goodwin’s career began in 1936 when he became the summertime assistant to Roy A. Hill, a South Georgia physician who specialized in the treatment of malaria. Hill contracted with regional drug companies that had begun synthesizing new antimalarials like Atabrine. Using these products alongside quinine—the centuries-old fever reducer now mainly recognized for the bitter taste it gives to tonic water—Hill canvassed the farmlands between Thomasville and Tallahassee providing medical care to malaria-carrying rural laborers. Chronic and ubiquitous, malaria not only affected the health of laborers, but sapped the region’s production capacity as well. Goodwin would recall the staggering prevalence of malaria throughout the South in an interview nearly thirty years later:

. . . Every commercial and educational activity had to plan on living with malaria. For instance . . . the Brooks-Scanlon Lumber Company in Taylor County, Florida, where we worked in 1936–1937 employed about 700 people to maintain a working force of 300. More than half of the crew was ill with malaria at all times during the malaria season. The workers would actually plan to work in anticipation of their malarial attacks . . . This was expected as a way of life. (Melvin H. Goodwin, Interview with Boisfeuillet Jones and Hunter Bell, August 10, 1966, Box 1, Folder 7, Melvin H. Goodwin papers, Manuscripts, Archives, and Rare Book Library, Emory University.) 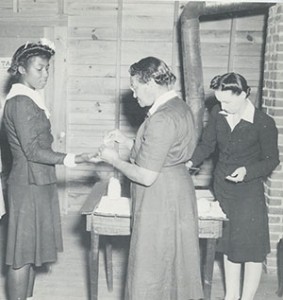 In the summer of 1938, Hill began administering treatments at Ichauway Plantation in Baker County, Georgia. It was here that the young Goodwin, still an undergraduate at Emory College, met Ichauway owner and Coca-Cola executive Robert W. Woodruff. Woodruff had attended Emory College prior to its relocation to Atlanta from the original Oxford campus and remained a loyal supporter of the university as it began developing graduate and professional programs, including a School of Medicine in 1915. Woodruff understood malaria as a major impediment to social and economic development in the southern states and suggested the creation of an epidemiological research center to be headquartered at Ichauway. In a meeting with Goodwin and several university administrators, Woodruff arranged institutional support for an Emory-run epidemiological research station to be overseen and staffed by Emory’s medical school. With Goodwin as its assistant director, this research center was established as the Emory University Field Station in April 1939. Its first offices were located in a vacant polling station owned by the county, but its facilities expanded alongside research activity, with several new buildings being erected by the mid-1940s. Shaded by live oaks and Spanish moss, the field station’s wooden frame laboratories dotted one corner of the vast rural estate.

As the United States entered the Second World War, operations at the field station were temporarily suspended. More importantly, the declaration of war would transform the priorities and architecture of epidemiological research in America for decades to come. Just months before Pearl Harbor, Goodwin could still speak of malaria as a regional issue:

. . . it is proper to state that malaria has assumed an important role in the social and economic retardation of the South. To make the affected area attractive to the outside capitol [sic] necessary for industrial and agricultural exploitation, malaria must be controlled. To control malaria economically and efficiently, more fundamental knowledge about it is required. This is both the reason and the objective of malaria research. (Melvin H. Goodwin, Briefing Memorandum on Emory University Field Station, 1941, Box 1, Folder 7, Melvin H. Goodwin papers, Manuscript, Archives, and Rare Book Library, Emory University.)

Almost immediately upon Congress’s declarations of war in December 1941, however,malaria emerged as a paramount international health concern for the United States military. Deployment of American soldiers to the Pacific theater, where malarious conditions prevailed, made the disease a matter of national urgency. No longer could Americans ignore malaria as the peculiar scourge of rural southern laborers.

The exigencies of war demanded cooperation and consolidation in various industries; epidemiological research was no exception. Shortly after America’s entry into the war, the United States Public Health Service (USPHS) absorbed the Emory University Field Station at Ichauway. A commissioned officer in the USPHS, Goodwin split time between the Field Station in Baker County and the recently established Office of Malaria Control in War Areas (MCWA) in Atlanta. Organized in 1942, the MCWA was the direct institutional predecessor to the modern CDC. Incorporating previously independent endeavors, it served as the umbrella organization for all research aimed at malaria treatment and prevention among American soldiers. If Goodwin’s own résumé is representative, Emory University, the USPHS, and the MCWA shared staff unquestioningly. 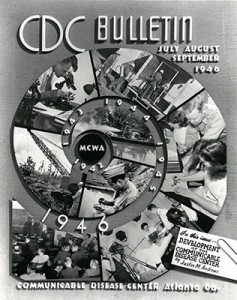 Goodwin’s papers in the Emory University Archives illumine his, and the Emory University Field Station’s, centrality to the early project of disease control in America and cast light on the importance of malaria in the creation of a national disease control apparatus. They also conjure a deeply personal foundation of the CDC whose future, like its past, extends far beyond its glistening Atlanta laboratories. Like the war, however, the MCWA did not last forever. The long-awaited peace in 1945 required its own set of reorganizational efforts, leading to the dissolution of the MCWA the following year. Based in Atlanta, the CDC was born as its successor—first as the Communicable Disease Center and only later, in 1970, renamed the Center for Disease Control. As an early cover of the CDC Bulletin indicates, it is difficult to overestimate the centrality of malaria research, treatment, and eradication to the early history of the organization that became the CDC. Much like Goodwin—who would direct the CDC’s satellite at Ichauway until 1957 before leaving to direct a new CDC facility in Arizona—the Emory University Field Station had been absorbed as a foundational component of an increasingly vast national agency. Both Goodwin and the Ichauway station would remain operational, at least temporarily. As the CDC began to consolidate itself, administratively and geographically, around a few central buildings in Atlanta, both the South Georgia station and its longtime director became increasingly peripheral to the operations of a burgeoning federal agency.