Mary Dalton Howard collected and preserved newspaper and magazine articles as well as other printed materials related to the 1950s and 1960s phase of the Civil Rights Movement in the United States. Her scrapbook encompasses many events of the movement leading up to and as a result of the 1963 March on Washington for Jobs and Freedom, one of the largest political rallies in United States history. Hundreds of thousands of marchers travelled to Washington, D.C. in August of 1963 to call for civil and economic rights for African Americans. It was during this event that Martin Luther King, Jr. gave his extraordinary “I Have A Dream” speech.

Howard’s scrapbook was identified as a good candidate for the SAT grant project because her papers have been well used by researchers, but her scrapbook has been restricted from use due to its poor condition. MARBL staff sometimes restrict the use of items due to privacy concerns, either stipulated by the item’s donor or such as with medical records protected by HIPPA laws, or because the items are too fragile to handle. One of the main objectives of the SAT grant is to preserve and protect items, both in physical form and by digital imaging, in order to make them available for patron use.

The binding of this scrapbook was relatively intact upon arrival in that the pages were all still attached at the spine, but the book was overstuffed with the clippings from magazines and newspaper articles. 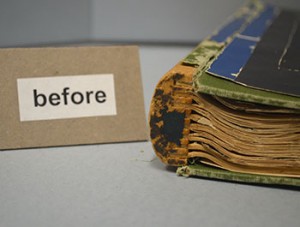 Detail of wooden spine prior to repair.

One section in the back of the scrapbook was blank, so those pages were removed in order to relieve the stress on the binding and reduce the amount of swell caused by so many items added between the pages.

The pages were quite brittle and had significant usage tears at the fore-edge and along the tail edge where a reader might grasp to turn the page. Extensive mending was necessary throughout the text block. A thin, strong tissue was used to mend the tears and in some cases to fill significant gaps along the edges. 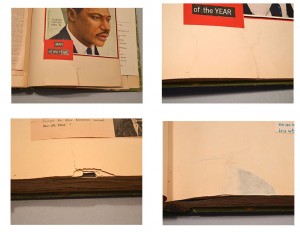 Top Left: There were extensive tears along the tail and fore edges of the pages. Top Right: Tears were mended with a strong, thin tissue and very dry wheat paste.Bottom Left: In some cases, the pages were missing pieces due to the brittle nature of the paper. Right: For pages missing larger sections, mending tissue was used to fill the gaps and add strength.

A few items needed flattening due to curled or folded parts. Other items needed to be reattached or tipped in to the substrate pages. Tape and staples had to be removed in several places and the staples were replaced with linen thread.

Left: In some cases, pieces of the brittle pages needed to be reattached. Right: Many items needed flattening.

The first several pages of the scrapbook were detached from the binding, so those pages were mended, guarded as necessary, and a Sekishu paper (thin but strong Japanese tissue) hinge was added to each spine edge. The pages were then sewn together as a section, which will remain separate from the main text block but still inside the front cover. This allows the pages to remain in the correct order with subsequent pages, but with little disruption to the existing binding.

The spine fabric had been completely detached from the wooden spine. A layer of super was applied to the wooden spine followed by a layer of book cloth, and then the spine was secured to the covers by delaminating and lifting the edge of the book cloth on the cover and slipping the new book cloth and super underneath. 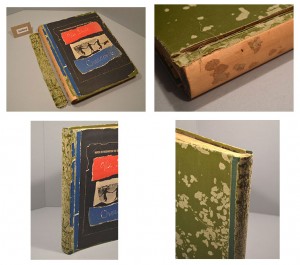 Top Left: The spine cloth was completely detached from the wooden spine upon arrival to Preservation. Top Right: The covers were still attached but needed reinforcing.Bottom: Views of the scrapbook after the spine repair.

Throughout this scrapbook, Mary Dalton Howard found many ways to creatively express the content. In the very last spread, she composed a collage of faces in perspective coming out of the distance – marchers – starting with Martin Luther King, Jr. and including the images of many other freedom fighters, even an image of Abraham Lincoln’s likeness at the Lincoln Memorial. The last page (the left half of the collage) was detached from the binding, so it was mended and a hinge was created to secure it to the spine and realign it with the other half of the collage.

Before and after the final page of the scrapbook was reattached to reunite the two halves of Howard’s collage.

It was difficult to determine where some items found tucked within the pages had originally belonged, so those items will be stored in a folder along with the scrapbook in a custom-fitted archival box. Loose items were encapsulated in Mylar if they were quite fragile and in danger of damage from future handling. The Howard scrapbook is creatively constructed and its content is a powerfully impactful record of the Civil Rights Era of the 1950s and 1960s. It is now housed in MARBL and available for patron use. 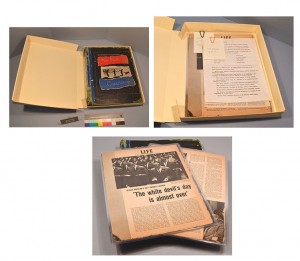 The scrapbook housed in its custom-fitted archival box with loose items, of which the original location within the scrapbook was unknown, and examples of some items that have been encapsulated in Mylar for extra protection.