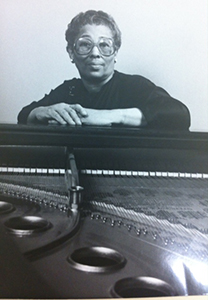 For the past few months, our team has been working with the collection of papers and materials of musician and educator Geneva Southall.  A native of New Orleans, Louisiana, Southall earned her PhD in Piano Performance and Music Literature from the University of Iowa. She was a professor at South Carolina State University and the University of Minnesota, where she taught for twenty years and was one of the founding faculty members of the African American Studies department.

For this collection, I took on Southall’s research and writing files. Southall’s wide-ranging academic interests are evident throughout the collection, but the project that occupies most of the series is her three-part biography of a blind piano prodigy born into slavery named “Blind Tom” Wiggins. Southall’s initial discovery of “Blind Tom” came in a textbook on African American composers while she was working at the University of Iowa. The mention of Tom was brief and portrayed him as a sideshow attraction with  little musical ability. Yet this description (especially if he was really was as un-talented as it suggested) piqued Southall’s interest, and she began to investigate. Through careful background research that included contextual information about the nation during Blind Tom’s life, clippings of reviews and notices in newspapers about performances he gave, and other articles and original sources, Southall compiled the story of a truly extraordinary life.

Born in 1849 on a plantation in Georgia, “Blind Tom” was blind at birth. He and his parents were sold to the Columbus, Georgia lawyer (and later Civil War General) James Neil Bethune a year after Tom’s birth. At Bethune’s plantation, Tom’s blindness shielded him from labor, and he was allowed to explore the plantation. At an early age he showed great promise on the piano. He taught himself to play through imitation by the age of four. The Bethune family recognized his skills, and he was moved into the house to continue working on his piano skills. By the time he turned eight Tom was sent around the country by Bethune and the promoter Perry Oliver to perform for eager audiences. With up to four shows a day, Tom earned a large payday for Bethune and Oliver.

Even after Emancipation, Tom continued to perform.  Bethune, acting as Tom’s manager and custodian, took him around the country and to Europe. Eventually, Bethune’s son John became Tom’s custodian. After John’s unexpected death in a railway accident, a protracted legal battle ensued and resulted in John’s estranged wife becoming Tom’s custodian. In a circumstance similar to the slavery from which he was supposed to be free, she forced him to perform whenever told, and he retained none of the profits from his shows. Tom was never able to live a truly free life until his final years. Too sick to continue touring, he settled down in Hoboken, New Jersey where he died of a stroke.

Southall’s research and writing series is comprised almost entirely of material that tells this story. From the show reviews to sheet music written by “Blind Tom” himself, Southall uncovers a tragic story of a man with boundless talent and potential who was oppressed by terrible injustice.