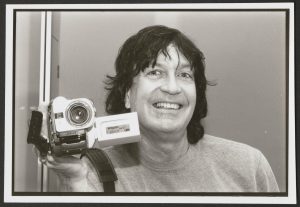 Shortly after writing this first blog post, I was, along with the rest of the Rose Library, deeply saddened to hear of the passing of Dick Richards, one of the founders and producers of The American Music Show, on September 13th, 2018. Richards’s dedication to this program incomparably enriched Atlanta’s queer community for over 20 years. He was also largely responsible for preserving this show, alongside other pieces of queer history, so that we have them today. More about Richards’s life and work can be found here.

Soon, our collection of The American Music Show will be publicly available at the Rose Library for anyone interested in viewing it. We sincerely hope that the collection will serve to expand Dick Richards’s legacy in queer Southern history, and that it will increase the viewership of his historic program well into the future. The post below is the first of a series that will document this collection and the process of archiving its many recordings, letters, photographs, and works of art.

…there are essential reasons for which a concept in the process of being formed always remains inadequate relative to what it ought to be, divided, disjointed between two forces. And this disjointedness has a necessary relationship with the structure of archivization.

I felt somewhat disjointed during my first few days in the archive—caught between an identity as a reader of texts, and my occupation this year of making texts readable. The boxes and manila folders there form a sort of quicksand into which one could sink at any moment.

I should introduce myself. My name is Andrew Kingston. I’m a humanities scholar, currently finishing up a PhD in Emory’s Department of Comparative Literature. I teach and write about literature and questions in philosophy, music history, and theories of sexuality. Right now my work deals a lot with opera and the concept of decadence. But don’t worry, I won’t talk about that here. I am also the 2018-2019 Woodruff Fellow at Emory’s Rose Library, where I am just beginning work on the Rose’s collection of The American Music Show, an Atlanta public access TV show that ran from 1981 to 2005. Even if it isn’t explicitly LGBTQ-themed, the show is an audiovisual monument to the Atlanta queer scene. Its fragmented aesthetic is characterized by low-budget camp, shifting between music and improvised comedy, political satire and drag, always between the dry and the excessive. As with any performance-based art, it has its lulls, too; but even in the few episodes I’ve seen thus far, at its best it can be a tour de force of libidinal surrealism and queer suggestion. Case in point: check out these videos of a young RuPaul—who was a frequent guest and performer on the show—in which he “goes fishing,” and then rescues the president’s son as a secret agent named Starbooty. They’re two of my favorites so far.

I’ve now finished processing the collection, which entails organizing its VHS tapes (over 700 of them) and recording information like their dates and segment titles. These are titles like “Halloween Special with Silly Satan, “Saddam Hussein in Outer Space,” “A Mime,” “Special guest star Drunk Girl presents a do-rag fashion show,” or “Shades of Shame.” As someone interested in the idea of decadence, I’m naturally quite drawn to some of these. And it’s here that I’m finding myself a little disjointed, and caught between two responsibilities. The literary scholar in me feels a pull to theorize these titles and bring out their potential meanings or ironies, to relate them to my research questions, perhaps to bring them to bear on the contemporary American political climate—about which they could teach us quite a bit. But I also have to restrain this urge to jump into the quicksand of The American Music Show (at least for now), because of an ethical burden that weighs upon the archival worker. It is this: when making information available for researchers, one can’t pre-interpret it, or decide what is supposedly significant about it beforehand. And in this sense there is something of an obligation to remove oneself from the organization and presentation of material. Such an obligation reminds me, in a different way, of what the poet Stéphane Mallarmé says about the role of the writer in relation to poetry: “The pure work implies the elocutionary disappearance of the poet, who cedes the initiative to words.” Like the poet, in other words, the archivist disappears in the face of the archive, so that unforeseeable future connections can be made and new ideas can be allowed emerge.

But of course it is never possible to disappear completely, and all archival choices have political consequences for cultural memory. Certainly, as I remember seeing written on the face of a coffee mug here, “archives are always political.” And so certainly it is not by accident that Emory has acquired, of all public access TV, this series in particular, this absurdist, bold and boldly queer music-comedy show. It’s a serious job to process this funny show, then, working somewhere divided between disappearance and politicization. But once the collection is more fully put together, researchers in different fields of culture, performance art, gender and sexuality studies, and others will be able to disseminate this important material. In doing so, they will help to considerably broaden our understanding of Southern LGBTQ history. But not only history: The American Music Show’s complex aesthetic speaks (or sings) to our world today, too, and to its futures.

During my fellowship, I will be writing more of these blog posts, detailing this collection and my experiences working with it. A part of the collection is already available to watch in our reading room, and there is a lot more on the way.