In June 2019, Dr. Jeremy McMillan conducted research at Emory’s Rose Library as a recipient of our Short-Term Fellowship Program. Dr. McMillan is a pianist who currently serves as a visiting professor of music at Stillman College in Tuscaloosa, Alabama.

It was a pleasure to spend a week in the Stuart A. Rose Manuscript, Archives and Rare Book Library at Emory University to conduct research for my research project Négrophilie.  The research project is a spin-off from a chapter of my doctoral thesis, Cinq Études de Jazz: A Study of Jazz and Modernism.  It profiles Czech composer Erwin Schulhoff and his piano composition Cinq Études de Jazz, a set of five etudes (short study pieces) named for the popular social dances that were in vogue during the Roaring Twenties.  I posited that Schulhoff used the study pieces in an attempt to recreate the nightclub and cabaret scene in Paris and the district of Montmartre during the Jazz Age, a time when the Parisian audience was spellbound by the fresh and spontaneous form of expression of black entertainers.  The French had a desire to regain a sense of normalcy after World War I.  The image of their beloved Republic had been turned on its head following the carnage of war.  The war-weary patrons found relief and healing in the sights and sounds of jazz.  Even though the Parisians were awed by this fresh mode of expression, this fascination came on the heels of a long and complicated history of European colonialism and the resulting objectification and fascination with the “cultural other” (exoticism). By the 1920s, however, négrophilie had swept France and the Continent at large.

“Négrophilie” is the French term for negrophilia which, as its name implies, is the act of exoticizing people of African descent.  Negrophilia is a complex phenomenon with two sides that tend to morph into one another over the course of time and ever-changing cultural influences.  Carole Sweeney in her book From Fetish to Subject: Race, Modernism and Primitivism (1919-1935), expounds upon a theory that one side of negrophilia—the obsession and fetishization of the black entertainer’s body, kinesthetic awareness, charisma, and perceived libidinous energy—is an “inversion of the essentialist taxonomies of earlier derogatory stereotypes”.  This theory explains how France— the same country that once objectified indigenous African people by exhibiting them in “Human Zoos” at its World Fairs—had become obsessed with the sexually-charged kinesthetics of black entertainers who danced the Charleston before the lustful gaze of European men. It is evident from the cabaret scene of Montmartre that black entertainers—who had been marginalized and oppressed on their native soil—duly exploited these inverted essentialist taxonomies.  For this reason, I thought it necessary to focus on the phenomenon of Josephine Baker and the long and successful career of nightclub owner Ada “Bricktop” Smith.  Josephine Baker was the emblem of European fantasy and fetish.  When I completed the research for my dissertation, I realized that Baker was the summation of all I was trying to describe.  She held the 9th arrondissiment of Paris captive by the spontaneity and erotic undertones of her performances.  She was at once beheld as both an icon of modernist art and pop culture. These performances not only played into the sexual fetishes of European men, but—for all the reasons listed above— resonated with the ethos of modernist artists who sought fresh inspiration for their work.  Bricktop owned nightclubs in France, Italy, and Mexico City over the course of her long career.  Her charisma endeared her to royalty and celebrities from around the world and she, like Josephine Baker, taught the Charleston dance to enthusiastic patrons from all walks of life. 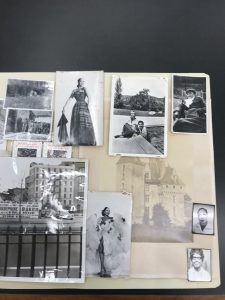 The fact that Baker’s enduring stardom (she was no objectified “one hit wonder”) along with the overwhelming success of Bricktop, reveals a need to get to know these multifaceted figures on a more intimate level.  As serendipity would have it, a few months after I successfully defended my thesis, I received an email about the Richard Long HBCU Fellowship and discovered that the personal correspondences of Baker and Smith are housed in the Rose Collections.  These correspondences include business transactions, fan mail, personal scrapbooks and photos.

The Josephine Baker letters span a period between 1938 and 1968.  By the time of these correspondences, Baker’s breakout performance at the Champs-Élysées  was a distant-but celebrated memory.  She had married her fourth husband, Jo Bouillon, and had acquired Château des Milandes (acquired in 1947), a castle in southwestern France. 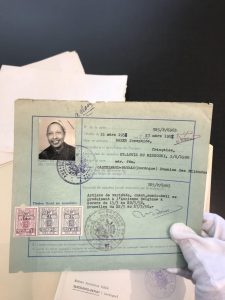 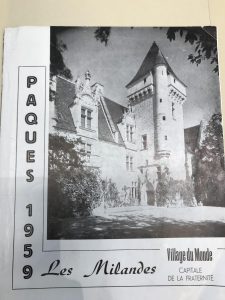 These personal correspondences gave me the opportunity to veer beyond the persona created by the image that Parisian pop culture bestowed upon these icons.  It reveals—especially in the letters of Baker—how they assimilated into the culture and absorbed the language.  It also offers clues on the personality traits that helped them soar beyond novelty status—a seemingly insurmountable feat considering that Paris had its share of black performers who did not become icons.  One such example is a June 1959 correspondence between Josephine Baker and Abner Kenon, a struggling black artist who came to Europe on his own.  At the time of the correspondence, he was in Belgium. 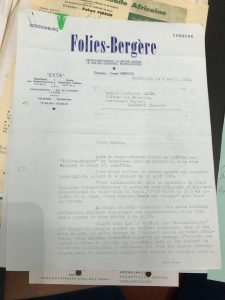 In addition to requesting an autographed photo, he wanted assistance in finding gigs.  Baker replied that she was “too occupied in the moment to assist”.  The letters and business transactions duly corroborate Baker’s reply to Kenon.  Among the items in the folders were contracts that show an overwhelmingly busy performance schedule throughout Europe.  There were also business cards that possibly reveal her spending habits and expensive tastes in furniture, clothes, and china.

The Bricktop papers are archived in two collections: the correspondence between Bricktop and Jodi Desmond (1958-1972) and five boxes of papers, the bulk of which date between 1950 and 1967.  I was able to gather that Jodi Desmond was possibly involved in film production.  Bricktop’s consistent salutation to Desmond (“Jodi, Darling!”) had a mysterious way of evoking her charisma.  Bricktop’s collections were extremely fun to peruse.  The photos in particular reveal a magnetic personality that helps one understand how her patrons were drawn—not necessarily to her nightclubs—but to Bricktop herself. 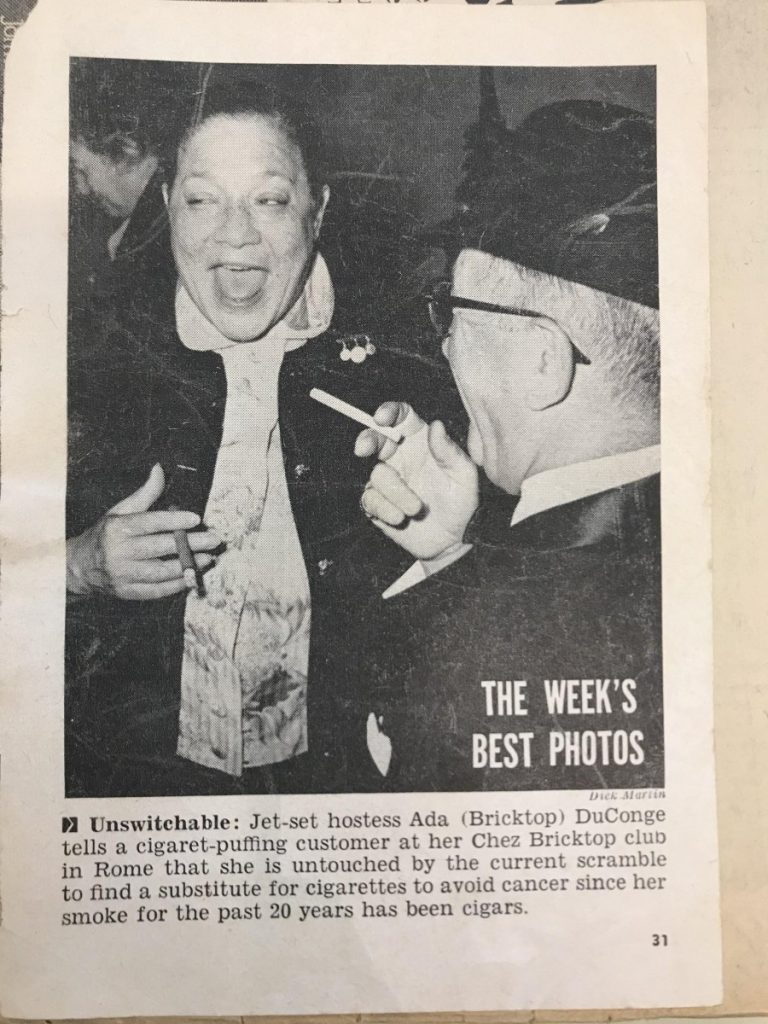 In my personal observation, the photos reveal that she was an emblem of black female spirituality and social graces—that even though she enjoyed the high life, she loved the Lord. 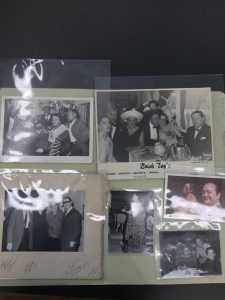 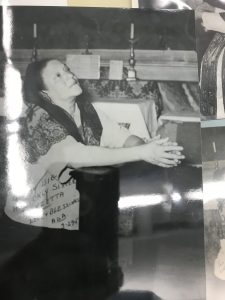 Image inscribed by Bricktop to her sister, Bricltop papers.

This personality trait is a recurring theme among many celebrated female black entertainers and icons.  There is this combination of charisma, spirituality, and strength that draws them to their fans.  Furthermore, this strength and oftentimes motherly persona tends to come on the heels of suffering.  These traits are what make their exploitation of European essentialism so interesting.  It invites one to delve into the mechanics of how these women, Baker in particular, forged an opportunity from the gaze of negrophilia.

In an era tainted by the oppression and marginalization of black people in the United States, the social condition was not favorable for the rise of an icon with Baker’s unique persona.  However, the term “unique persona” leads me to ask a question: was Josephine Baker simply an anomaly; a woman with a special charisma that allowed her to transcend the negrophilia of interwar Paris?  The evidence of her brilliantly calculated exploitation thereof: having led a lavish lifestyle replete with an active sex life (supposedly with many male and female lovers), her devotion to family (she adopted a family of 12 multiracial kids that she called the Rainbow Tribe), along with her ability to somehow evoke a wholesome persona makes me think so.  With Josephine Baker, I personally feel there exists this dichotomy of wholesomeness and eroticism. 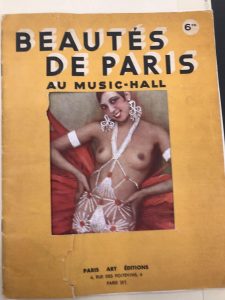 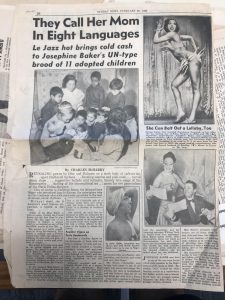 Today’s world is replete with entertainers who act as influencers who fight for equality on all fronts.  These two women, however, were the true trailblazers and visionaries.  There is a scripture in the KJV Bible that says “A prophet is not without honour, but in his own country…and he could there do no mighty work”.  This scripture aptly describes these two women: the way they championed LGBTQ and civil rights by how they lived their lives, along with the fact that they had to leave their native soil for a better social climate in order to carry out their life’s work.   My research aims to use their lives as one of many examples that demonstrate the importance of the black woman— her ability to overcome adversity and marginalization—as a devastatingly effective weapon in the struggle against inequality.  History shows that this is in her DNA.  Wynton Marsalis, a noted jazz trumpeter, once mentioned that it was the African slaves’ propensity to improvise that helped them to survive and navigate an unfamiliar landscape, language, religion, and way of life.  They survived by any means necessary—even if it meant taking something meant to be derogatory and gloriously exploiting it.  All struggling artists should take note.  These women are teaching the craft.