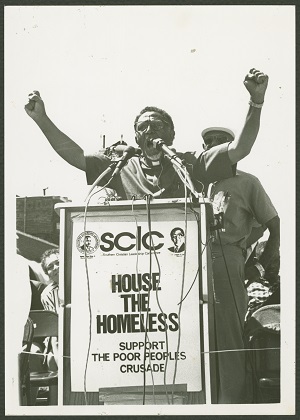 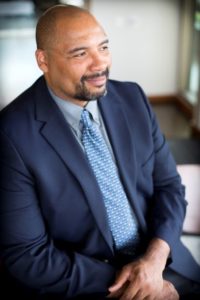 The recent passing of Reverend Doctor Joseph Echols Lowery on March 27, 2020 has been sobering to say the least.  The fiery minister, civil rights pioneer, human rights advocate, and challenger of injustice everywhere was not only a truth speaker, he demonstrated and encouraged the necessary actions that could and did lead to the necessary societal changes.  Behind his words and actions were experiences, wisdom, and focused intent.  A co-founder of the Southern Christian Leadership Conference (SCLC), his life is not only worth accounting for because of what he represents to the history of the African American community’s struggles and resistance to segregation and injustice, but his lifelong commitment to the future of humanity as well.  Dr. Lowery is a firm example of someone fully committed to eradicating injustice everywhere, regardless of the potential costs to himself.

Dr. Lowery was, and will remain, a powerful symbol as a man who chose to live and give his life to the cause of freedom.  While he was a contemporary of Dr. Martin Luther King Jr., Ralph Abernathy, and Wyatt T. Walker, Lowery was different.  From the start of his career in the pulpit, his presence and style of presentation resonated in sonic tones both above and below the common audible frequencies used by those in leadership.  In other words, Lowery’s approach to leadership was in alignment and resonated with the masses attuned to the needs of the socially, economically, and politically isolated and marginalized. 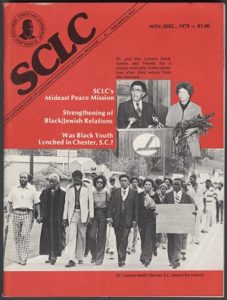 In a 2007 interview, Dr. Lowery defined what leadership meant to him.  “Leadership,” he argued, “is being empowered by certain principles and goals to inspire others to share those principles and goals, and to work with you towards them.  It’s not being perfect…. It’s not driving or pulling; it’s inspiring people, convincing, urging, cajoling, leading people to share your vision and to work with you to realize [it].[1]

In the eyes of Dr. Lowery, to be a leader meant to win people over to your side based on principles and goals that could be adopted and supported by all.  How one conveys and realizes a vision that can inspire is based on the confidence of the individual in the position of leadership.[2]  Because he had proven himself as a man of principle as well as a man of God, who was committed to justice for the racially marginalized, the impoverished, isolated, ostracized, and demoralized, Dr. Lowery was respected by a range of “folk” within the African American community.  From the farmer to pharmacist, to school children and politicians, he was recognized as the voice that meant business. He also won over white allies, who saw the Methodist minister as someone who was not to be fooled with but supported.  If Joseph Echols Lowery was attending to a matter, it was important to him, and he wasn’t going away until it was resolved. Period. 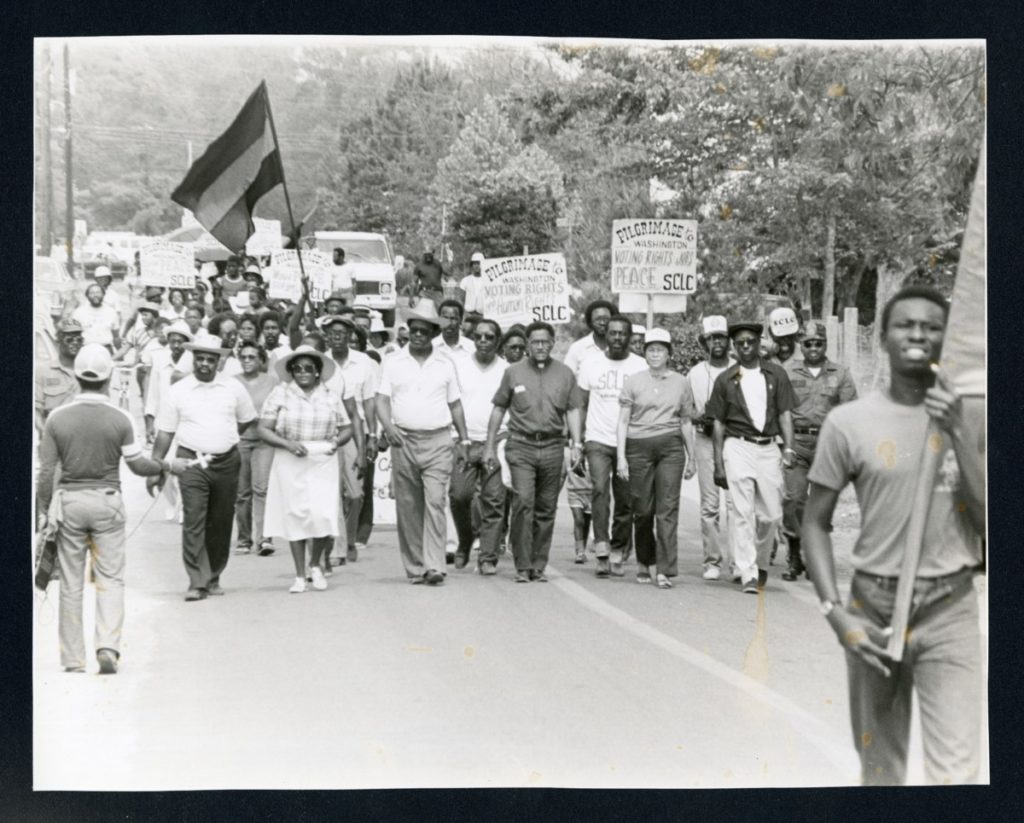 Pilgrimage to Washington for Voting rights

On the front lines, Dr. Lowery reaffirmed his faith, the faith of the faithful, and most importantly, he inspired faith in the faithless.  A prerequisite for implementing his vision as a leader were his humble beginnings, training, and recognition of what was right and just.  He learned from his observations that individuals needed to commit to changing the unfavorable outcomes experienced by communities, through challenging the circumstances under which people were forced to live.   He recognized the need for “people who stand up to oppression.  People who are not afraid to take risks…, [b]ecause unless somebody rocks the boat, the boat’s going to always leak on your end.”[3] For Dr. Lowery, the way towards justice was to rock the boat.  As he grew into his calling as a preacher, teacher, and man of action, he learned how to impart valuable lessons strategically and lovingly. 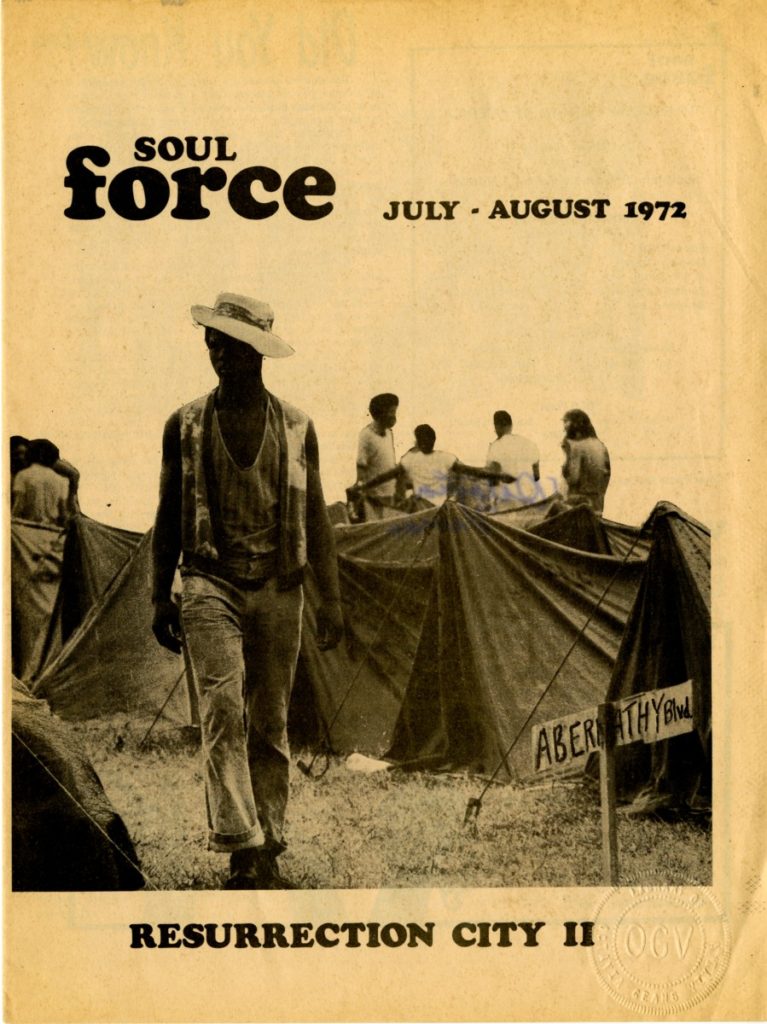 The Poor People’s Campaign and Resurrection City In 1968, Dr. Martin Luther King, Jr. initiated the Poor People’s Campaign to advocate for a coalition of people from across the country that would “demand federal funding for full employment, a guaranteed annual income, anti-poverty programs, and housing for the poor.” After his assassination on April 4, 1968, tens of thousands of Americans of all races descended on Washington, DC to protest the challenges faced by 34 million Americans. From May 15 to June 24, 1968, the unified protestors lived on the Mall in tents made of wood. The makeshift community became known as “Resurrection City.”

In 1968, after the assassination of Dr. King, the Poor People’s Campaign brought attention to the millions of Americans suffering from the economic injustices supported by the Federal government, industrialists, and politicians benefitting from the inequality promoted by American capitalism.  The participants included African Americans, white Americans, Asian Americans, Latino Americans, and Native Americans.  Dr. Lowery, like King, believed that in the richest nation in the world the evil of poverty was directly linked to the grotesque capitalism practiced by the wealthy and the system that supported them.  The focus of the wealthy was on profits not people, because they have refused to see the humanity of those who are economically and socially beneath them. 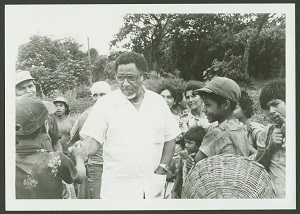 “America,” Dr. Lowery reminds us, has to hear the message that “we cannot exist comfortably as an isle of plenty in the midst of a sea of depravation and want.”[4]  Lowery’s stinging commentary is especially important today in the wake of COVID-19, and the ways in which the wealthy are continuing to demand the working class and working poor sacrifice themselves for capitalism.  Indeed, politicians are leveraging and weighing the pain of others against their own possible financial gain.

In the end, the good Rev. Dr. Joseph Echols Lowery was a radical, revolutionary, outspoken, model for leadership in a country and in a world where people still need examples to live by.  If anything, he reminds us that we must never give up on all the gains we have made.  We have come to far to retreat into apathy.  While very few of us can take leadership positions, we can support our leaders by catching their vision and following and acting in concert to effect change.  Each of us has the capacity to do this, and we should.  Because at the end of day, we can only save ourselves.

Resources in the Stuart A. Rose Library