In February 2020, Gary Wade conducted research at Emory’s Rose Library as a Rose Fellow. Mr. Wade is a who is a Ph.D. candidate at Durham University’s Centre for Catholic Studies. 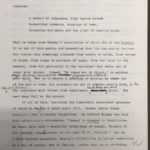 Darcy-OBrien on Heaney and Dante

In the Seamus Heaney papers archived in the Rose Library at Emory is the draft of a lecture which Darcy O’Brien sent to Heaney in March 1992. Towards the end of the lecture which explores the influence of Dante on Heaney, Darcy says ‘Heaney’s Catholicism is better understood as a way of seeing, and of feeling, rather than as an orthodoxy.’[1] A few years later in an interview with Maggie Parham, Heaney said something similar:

People talk about the effects of a Catholic upbringing in sociological terms:  repression, guilt, prudery. What isn’t sufficiently acknowledged is the radiance of  Catholicism. It gave everything in the world a meaning. It brought a tremendous sense of being, of the dimensions of reality, the shimmering edges of things. That never quite vanishes. The older I get, the more I remember the benediction of it all.[2]

Born in 1939 (just three months after Yeats’ death) at Mossbawn farm in County Derry, Heaney grew up in a world where the seasonal year ran parallel with the liturgical one and where the celebration of saints’ feast days was as important a pulse in the life of the farming community as the harvest was. What struck me in reading through Heaney’s letters at Emory was the extent to which the saints’ calendar lived on in Heaney’s imagination and in his dating of particular letters. For example, in a fax message dated 25 March 1995, he begins: ‘My Dears, A week ago already! But on this day – the Feast of the Annunciation – the message should go forth of the joy bestowed and the privilege relished in Amsterdam.’[3] 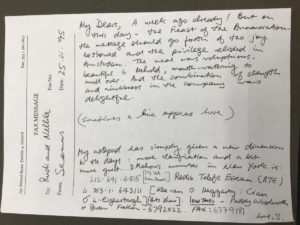 Letter from Heaney on the Feast of the Annunciation

Heaney’s experience of growing up at Mossbawn was to have a formative influence on his early life and on his life as a poet. His childhood home was an intensely devotional one where the recitation of the rosary and the May altar in memory of the Virgin Mary were woven into the fabric of domestic life. Heaney acknowledges that his experience of growing up in a practising Catholic household at Mossbawn was ‘terrific for the sensibility.’[4] The Marian quality of devotion and the virtue of patience he saw reflected in the life of his own mother:

My sensibility was formed by the dolorous murmurings of the rosary, and the generally Marian quality of devotion. The reality that was addressed was maternal,   and the posture was one of supplication. The attitude to life that was inculcated into me – not by priests, but by the active lived things of prayers and so on, in my house,  through my mother – was really patience.[5]

In his beautiful poem ‘Summer Home’, in which Heaney recalls an unhappy period in his marriage during a ‘summer gone sour’, the reconciliation is expressed in deeply sacramental language and in imagery borrowed from the Marian devotion at Mossbawn:

The loosened flowers between us

for a May altar of sorts.

These frank and falling blooms

Soon taint to a sweet chrism.

Heaney returns to the May altar in his elegy for Francis Ledwidge in Field Work. Ledwidge, the Irish poet who died fighting for Britain in the First World War, is imagined (like Colum McCartney, elegised in ‘The Strand at Lough Beg’ earlier in the collection) far from what he knew:

Francis Ledwidge, you courted at the seaside

Beyond Drogheda one Sunday afternoon.

You pedalled out the leafy road from Slane

Where you belonged, among the dolorous

And lovely: the May altar of wild flowers,

Heaney’s Field Work, published in 1979, is as much an elegy to his own childhood and childhood pieties as it is to the friends and artists elegised in the collection. When Robert Lowell is leaving Glanmore Cottage after a visit to Heaney in 1977 (just days before Lowell died), Heaney celebrates the moment in an elegy where he writes:

you found the child in me

when you took farewells

under the full bay tree

by the gate in Glanmore,

as that lingering summertime,

the fish-dart of your eyes

risking ‘I’ll pray for you.’

When Lowell risks ‘I’ll pray for you’ he finds the child in Heaney. In Field Work (and in much of his other poetry) Heaney returns to his childhood and to Mossbawn not in a fit of nostalgia but as the well-spring of his poetic sensibility. Like Dante, he is in the middle of his life when he publishes Field Work and there were undoubtedly pressures to jettison many of the pieties of his childhood. But a letter to Ted Hughes as late as 1996 reveals the extent to which Heaney understood the Catholic devotion of his early childhood as ‘well water far down’ (‘Out of This World’, District and Circle) from which he continued to draw poetic life long after he no longer subscribed to the orthodoxy of Catholic belief:

We happened to be in the Cathedral on Saturday night at a Mass where an ordination was taking place. Two priests taking final vows, three deacons being consecrated,  bishops in mitres, litanies in Latin, Gregorian chant, murmurous responses – the whole underlife of my childhood and teens rallied and wept for itself. The stone and the squares, at once “southern” and Atlantic, lashed with rain and holding out for something more; it was potent because there is still just enough “living faith” around the place to make you feel the huge collapse that has taken place at the centre of the Christian thing.[8]

Like his father in ‘The Harvest Bow’ whose stick ‘Beats out of time, and beats, but flushes | Nothing’, a devout religious sensibility nurtured on a farm in rural Ireland in the 1940s may well beat out of time with a more secular vision beyond that world and time, but as a source for Heaney’s expansive poetic vision, it flushes nothing.

I am enormously grateful to the Rose Library for the fellowship which allowed me to look at the Heaney papers. The archive is really an Irish archive which includes Heaney’s papers. I was delighted to meet Professor Ron Schuchard whose vision was instrumental in securing much of the archive. Ron very kindly took time to put the archive in its historical context. It was also a great pleasure to meet Professor Geraldine Higgins who curated the wonderful exhibition “Seamus Heaney: Listen Now Again” in partnership with the National Library of Ireland. The hospitality which I received from both Ron and Geraldine was terrific and was an unexpected blessing on a wonderful two weeks. I would also like to thank Kathy Shoemaker, Courtney Chartier, and all the wonderful librarian staff for their patience, professionalism and kindness. I will always be grateful for the time I spent there and for the opportunity not only to look at the Heaney papers but to be a guest in such a hospitable place.