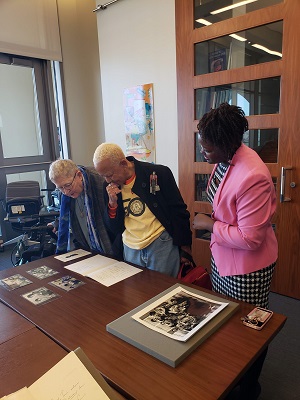 Even though National Poetry Month ends today, we hope these new videos featuring the indelible poet Nikki Giovanni will linger with you long after. Both were created this February, when Ms. Giovanni visited Emory’s campus for several wonderful days, during which time she met with Emory students for a Q&A in conversation with Professor Jericho Brown; sat down with members of Rose Library staff for an interview for our upcoming podcast series (more on that soon); read poems as the featured poet for the 20th anniversary of the 12th Night Revel, an annual celebration of poetry hosted by the Rose Library; and gave a free public reading at the Schwartz Center for Performing Arts on Emory’s main campus on the final day of her visit that attracted over 1,000 fans.

Since the event reached maximum capacity, many hopeful audience members had to be turned away (though many stayed and were able to meet Ms. Giovanni after the reading during her two-hour book signing session). We hope the video of this powerful reading will give those fans and many others in Atlanta and far beyond a momentary break from the uncertainties of this historic moment.

Nikki Giovanni’s life as a poet spans six decades. She is among the most influential and potent writers of her generation, and helped define, through her words and actions, not only the Black Arts Movement, but literary activism itself. Few poets have reached as wide an audience as she; and she speaks directly to this audience. Her readings are like classes in politics, economics, sociology, and literature. Ms. Giovanni’s intellect governs this particular reading in such a dynamic, engaging, and lyric way that it needs no further introduction.

In addition, we are pleased to announce the online premiere of “Allowables,” a short video commissioned for the 12th Night Revel, which features an original interpretative dance responding to Ms. Giovanni’s poem of the same title and a recording just after the dance of Ms. Giovanni reading the poem. The video was shot by filmmakers Adam Forrester and Lindsay Narbeth, who work together in Woodruff Library. Julio Medina, Assistant Professor in Emory’s Dance and Movement Studies program, choreographed and performed. Mr. Forrester served as editor.