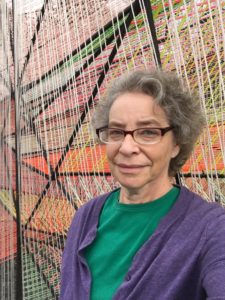 Kim Roberts is the editor of By Broad Potomac’s Shore: Great Poems from the Early Days of our Nation’s Capital (University of Virginia Press, 2020), and the author of A Literary Guide to Washington, DC: Walking in the Footsteps of American Writers from Francis Scott Key to Zora Neale Hurston(University of Virginia Press, 2018), and five books of poems, most recently The Scientific Method (WordTech Editions, 2017).

May Miller kept everything. Her files include not just her book manuscripts and drafts of poems, but correspondence, old address books, financial records, newspaper clippings, scrapbooks, rejection letters from journals, her wedding announcement, school records dating back to elementary school, photographs, awards, unpublished essays, and pedigree records for her cat Tical. I was fortunate to see all of this and more in her extensive archives, during a Rose Research Fellowship that took place over two weeks in April of 2019.  As a literary historian of Washington, DC authors, my project while at Emory was the explore the papers of two women writers who ran influential literary salons out of their homes—but I found myself concentrating on the huge trove of Miller’s archives.

Miller is remembered in my hometown of Washington, DC with great fondness, as the author of nine books of poems, and a co-founder of the DC Commission on the Arts and Humanities. She was an advocate for arts in the public schools, and the salon that she hosted was modeled after one she attended as a younger writer during the Harlem Renaissance period.

If she’s known at all outside of DC, it is for her links to the Harlem Renaissance, when she was a young ambitious playwright. She was interviewed numerous times in her old age, and sometimes you can sense her annoyance at being asked again about her personal relationships with Langston Hughes and Zora Neale Hurston—as if that were the only thing from her long life worth talking about. But living as long as she did, from 1899 through 1995, it was hard not to see her as a living bridge between those earlier times and contemporary poets living now. (And she did have some fun stories from the 1920s, about trips to Greenwich Village and Hurston draped in a “rapture-red shawl.”) In an interview with Isabel Wilkerson, published in the Washington Post in December of 1982, Miller opined that the Harlem Renaissance was not such a singular event: “‘People look at it as if it was the bright flower for all time,’ she added, pensively. ‘People want to set it aside. That’s all right. It’s just a term. But there will be other great flowers.’”

I have a particular interest in how literary communities form, and Miller was certainly an important node in the network that makes up Washington’s rich literary history. After two decades teaching in the Baltimore Public Schools, she returned to DC for good in 1944 and started a weekly salon in her home on S Street NW, inspired by an earlier salon run by Georgia Douglas Johnson. Like her mentor, she made sure to include younger writers, such as Claude Brown and Toni Morrison, when they were both students at Howard University.

One great find in Miller’s archives was a sweet thank you letter from Toni Morrison. Although the finding aid for Miller’s collections listed some of her regular correspondents, Morrison was not among the names listed when I visited the collection—you’d have to know that the future Nobel Award winner went by her birth name of Chloe Wofford while an undergraduate. (I was able to help archivists rectify that oversight.)

In the mid-1950s, Miller was an active member of a poetry workshop organized by Inez Boulton at American University, the same woman who had organized earlier workshops for writers of color in Chicago—including one famously attended by Gwendolyn Brooks. In the DC workshop, Miller honed the poems that would go into her first poetry books, Into the Clearing (Charioteer Press, 1960), and the two chapbooks Poems (Cricket Press, 1962) and Lyrics by Three Women Poets (Linden Poets, 1964). That twice-a-month Friday night workshop included some other eminent writers: Owen Dodson, Charles Sebree, Paul Lawson—and another writer who had also been active in Georgia Douglas Johnson’s Harlem Renaissance-era salon, Esther Popel Shaw.

Miller’s life-long friendship with Popel Shaw, like her closeness with Georgia Douglas Johnson, showed how those earliest connections to other women writers of color continued to influence Miller—despite her pleas to interviewers to talk about something other than the Harlem Renaissance. When Johnson died, her sons hired a company to clear out her house: her packrat tendencies had worsened as she aged, and the job of going through all that she hoarded was too overwhelming. So the records we have on Johnson are scarce, and copies of the last book she published, a limited edition book of poems from 1962 called Share My World, seem to have completely disappeared. But Johnson sent some of her clippings and drafts of poems to Miller—who of course carefully preserved them, as she did all her correspondence. So another unexpected treasure in Miller’s archives is an undated transcript, “Catalogue of Writings by Georgia Douglas Johnson,” compiled and typed by Johnson near the end of her life, listing not only her poems and plays, but the 24 songs she copyrighted, the 19 clubs of which she was a member, and an enumeration of all the places where her work had been reviewed, special citations received, and other tributes. This transcript is invaluable. 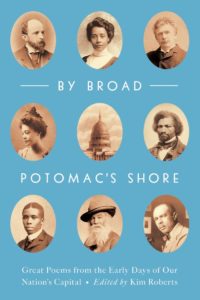 I worked in the Rose Library archives as I was completing the manuscript of my anthology, By Broad Potomac’s Shore: Great Poems from the Early Days of our Nation’s Capital (newly released from the University of Virginia Press). As I hoped, Miller’s correspondence led me deeper into a network of writers who lived in close proximity, attended events at one another’s homes, and built supportive communities. Although her own accomplished poems were written later in her life—and were thus outside the purview of my book (which covers the years 1800, when Washington, DC was founded, through about 1930 and the rise of literary modernism), I was able to highlight the accomplishments of a number of Miller’s friends, who benefitted from her great generosity of spirit: Carrie Williams Clifford, James Weldon Johnson, Alice Dunbar-Nelson, Angelina Weld Grimke, Jessie Redmon Fauset, Jean Toomer, Lewis Alexander, and Frank Smith Horne. I also included her father, Kelly Miller, and some of his contemporaries—and of course I also feature a selection of poems by Georgia Douglas Johnson. Thank goodness for all of May Miller’s glorious, meticulous record-keeping!