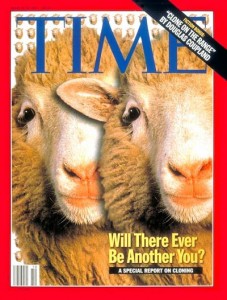 I decided that I wanted to do a bit of research on Dolly, the sheep that captured the world’s attention and sparked much debate about cloning for the public. All I knew of Dolly was that she existed and was a clone. She was heralded as a huge scientific breakthrough, which unarguably, she certainly was. But much to my surprise, it’s not for the reason I thought (and many others I’m sure). I believed that Dolly was famous because she was the first animal to be cloned and honestly, to this day, still believed her to be the only successfully cloned animal. Neither of these is true. Dolly is not even the first sheep to be cloned. Nor was she the first sheep to be cloned by Ian Wilmut of The Roslin Institute who is famous for her creation.

Dolly was actually the ninth of ten sheep cloned at The Roslin Institute by Ian Wilmut (2). So why is it that she is the only one that I have ever heard about and the only one that the media so desperately followed the story of? Because even though Dolly was not the first, she was the most significant (scientifically speaking).

All 10 of these sheep were cloned using the most common process of doing so: Nuclear Transfer. This is when the nucleus of an existing cell is removed and replaced with that of a new donor cell. I was curious about what was done with the “old” nucleus (wondering if it could pose as an ethical issue of its own), but couldn’t find any information about it. The 9 other sheep cloned at The Roslin Institute were cloned using embryonic cells. As stated in David Elliot’s paper (Chapter 12), Dolly was considered a break through because of the fact that she was cloned using the adult cells taken from an adult ewe’s udder. It was the first time something had been cloned using cells other than embryonic cells. Why had that never been done before? 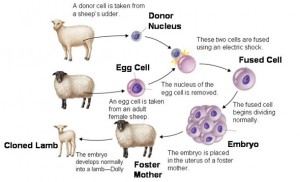 The body contains many different types of cells, such as blood cells, liver cells, skin cells, etc. These specific types of cells are referred to as differentiated cells and although all of them contain the same genetic information, they “can only access the genes needed for its particular function” (3). Differentiated cells were thought to be non-reprogrammable and therefore it was not believed possible to clone an entire being using only differentiated cells. Ian Wilmut proved that this was false and that it was in fact very possible to use differentiated (adult) cells for cloning. What he did was to take these adult cells and grew them under “starvation conditions” (3). This entails depriving the cells of various forms of “nutrients” such as carbon for instance. This causes the cells to de-differentiate and enter what is called the g0 state, essentially turning them back into unspecific, embryonic cells. This is why Dolly was special. Her creation represented the possibility to turn a differentiated cell back into any kind of cell.

There is some controversy about the successfulness of Dolly. The process by which she was created was without a doubt a novel success. But how did Dolly fare in regards to health and life? Wanting Dolly to live as normal a life as possible, she was allowed to breed and over the course of her life gave birth to 6 lambs. In 2001, Dolly developed arthritis which was odd for a sheep of only 5 years. The cause of this was never determined and after medication, her stiffness disappeared (1). In 2000, 2 of the other cloned sheep died of sheep pulmonary adenomatosis (SPA) which causes tumours to grow on the sheep’s lungs (1). Later, one of Dolly’s own babies contracted the disease and it was confirmed that Dolly herself was infected. When she was seen coughing in February of 2003, she was given anaesthetics and a CT scan was performed. The scan confirmed the presence of tumours on her lungs. Not wanting Dolly to suffer from this painful disease, the decision was made not to allow her to regain consciousness, and an over dose of anaesthesia was administered and Dolly was put to sleep on February 14, 2003. Sheep generally live to be around 12 years old and the development of SPA is not commonly seen in young sheep. Dolly developed it around the age of 5. This, along with her development of arthritis, has caused concern that using differentiated, adult cells causes premature aging in the clones. This has yet to be proven. (1)

Kass, in Chapter 11, calls for a universal ban on human cloning while still allowing “all cloning research on animals to go forward” insisting on the “inviolable distinction between animal and human cloning” (146-147). Researchers at the Universities of Cambridge and Edinburgh have successfully developed genetically modified chickens   that are incapable of transmitting the avian bird flu. They have been provided with an RNA molecule that stops the reproduction of the virus, and although they can still be infected with the bird flu, the fact that they are incapable of passing it on to other chickens has the potential of stopping the transmission of the virus. (1) It is easy to see the appeal of genetic modification in this sense. But again, a distinction must be made both between animals and humans and between cloning and genetic modification.

Just as an interesting side note, many animals have actually been successfully cloned. They include cows, cats, a deer, goats, sheep, frogs, horses, mice, pigs, monkeys, wolves and dogs. One of the dogs (according to Wikipedia) glows when exposed to UV lighting. (4)

74 thoughts on “The hype about Dolly”